Sessions Warns LEAKERS: 'DON'T Do It'

'No one entitled to surreptitiously fight battles in media by 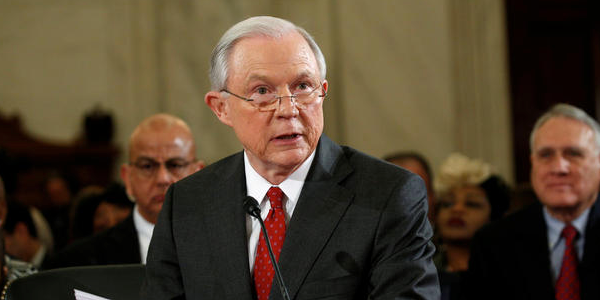 WASHINGTON – As the Trump administration struggles to deal with a flood of leaks, Attorney General Jeff Sessions is ramping up the Justice Department’s efforts to find the leakers and prosecute them.
“I have this message for our friends in the intelligence community. The Department of Justice is open for business and I have, this morning, this warning: Don’t do it,” Sessions said at Justice Department headquarters on Friday. “For the past several months we have made changes and are seriously ramping up our efforts.
“No one is entitled to surreptitiously fight their battles in the media by revealing sensitive government information,” he continued. “No government can be effective when its leaders cannot discuss sensitive matters in confidence or to talk freely in confidence with foreign leaders.”
Members of the media will also be held accountable, Sessions warned.
“I have listened to career investigators and prosecutors about how to most successfully investigate and prosecute these matters,” Sessions said.
“At their suggestion, one of the things we are doing is reviewing policies affecting media subpoenas,” he added. “We respect the important role that the press plays and will give them respect, but it is not unlimited.”
“They cannot place lives at risk with impunity,” he said. “We must balance their role with protecting our national security and the lives of those who serve in our intelligence community, the armed forces, and all law-abiding Americans.”
While the Obama Justice Department investigated more leak cases than all his predecessors combined, and even secretly subpoenaed the phone records of Associated Press reporters, Sessions said the number of active leak investigations has tripled during the Trump administration compared to the number when Obama left office.
Four people have already been charged with unlawfully disclosing classified information or concealing contacts with foreign intelligence officers, the attorney general noted.
The Trump administration has implemented a new unit at the FBI dedicated to probing the “staggering number of leaks” and to reviewing the DOJ’s current policies affecting subpoenas to the media, Sessions said.
Sessions was accompanied by Director of National Intelligence Dan Coats, Deputy Attorney General Rod Rosenstein and National Counterintelligence and Security Center Director William Evanina.
Coats warned that the DOJ is prepared to identify individuals “betraying” the American people by illegally sharing classified information and forwarding their information to the FBI.
“We will find out, we will investigate you, we will prosecute you to the fullest extent of the law and you will not be happy with the result,” he said. “Any disclosure outside authorized channels is illegal and we will not tolerate it.”
Coats said he is convinced the leaks are being perpetrated by members of Congress and the executive branch.
Classified information that leakers are sharing with America’s enemies is having a detrimental impact on the U.S. relationships with members of the international intelligence community, Coats warned.
Sessions’ attack against a “culture of leaking” comes a day after the Washington Post published leaked transcripts of President Trump’s January phone calls with Mexican President Enrique Peno Nieto and Australian Prime Minister Malcolm Turnbell.
The Post said it obtained full transcripts that were “produced by White House staff” and based on records kept by White House note-takers.
Hours later, the Wall Street Journal reported a grand jury had been convened in special counsel Robert Mueller’s investigation of the Trump campaign’s alleged ties to Russia.
White House staff members may be subject to lie-detector tests as part of the effort to determine who is leaking the sensitive national security information, Kellyanne Conway, counselor to President Trump, warned Friday.
“It’s easier to figure out who’s leaking than the leakers may realize,” Conway said on Fox News.
Lie detectors may or may not be used, she continued.
“There are many different ways to discover who is leaking. This is really incensing the people who are here to serve and that begins with the president and the vice president, our cabinet [and] our chiefs of staff,” said Conway.
Sessions’ announcement comes 10 days after President Trump publicly criticized his attorney general as “weak” and “beleaguered” for not aggressively cracking down on leaks.
The climate for leaks has been attributed at least partly to holdovers from the Obama administration and Republican bureaucrats who supported other primary candidates and actively oppose President Trump and his agenda.
Source>http://www.wnd.com/2017/08/sessions-warns-leakers-dont-do-it/

Posted by theodore miraldi at 5:00 PM