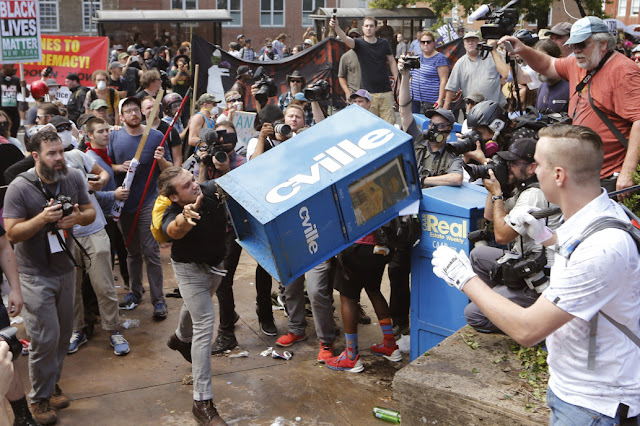 
President Trump should have left well enough alone. His Monday denunciation of costumed sheet-wearers and Nazi wanna-bes could have cleared the way for Americans of all stripes to focus their outrage on things that matter more than presidential words.
That would be the violence that is infecting our politics and the frightening acceptance of it as the new normal. But Trump’s defiance yesterday is sure to keep the media pot boiling over his rhetoric instead of an ominous reality.
Namely, that real protestors don’t carry baseball bats, crowbars and mace. Yet Saturday’s bloody clash in Charlottesville showed that many on both sides came ready to rumble.
While attention understandably is focused on the white racist who allegedly killed Heather Heyer with his car, blood was flowing freely before that tragedy. The mutual mayhem was so ferocious that cops withdrew, with one telling Fox News it was “too dangerous” to intervene.
In many videos, not a single cop is visible as dozens of combatants batter each other. One man is seen holding a device that is shooting a flame several feet long.
Similar scenarios have played out across the country in recent months, and many, including on college campuses, follow a pattern. Angry protests, usually against conservative speakers, turn violent, with windows smashed and fires set — and police do little more than watch.
The lax response reflects the contagion of what Heather MacDonald called the “Ferguson effect” after the riots in Ferguson, Mo. three years ago this month.
Recall that the St. Louis suburb was the scene of rampant violence, complete with arson and looting, after the police shooting of Michael Brown, an 18-year-old African-American.
Police were held back as commercial areas burned, and with violence erupting over a period of months, the National Guard was called in — and also initially held back.
Later, the St. Louis Post-Dispatch reported that documents and interviews showed that Missouri Gov. Jay Nixon decided “Guardsmen were not authorized to shoot to protect property in Ferguson, make arrests, or even stop people from committing most crimes.”
Nixon’s refusal to let law enforcement do its job has been copied by many politicians and college presidents. From Baltimore to Berkeley, they let the mob vent and destroy private property rather than risk criticism that police were too aggressive. Cops, knowing nobody has their backs, become reluctant to take risks.
One result of the politicization of policing is the soaring murder rates in many cities, especially Chicago, where mayor Rahm Emanuel accused cops of going into a “fetal” position.
Another result is the rise of violence at political protests. Those two horrors share a lack of preventive policing.
While it is is disheartening but not surprising that much of the current political violence revolves around race, the sudden focus on Civil War issues is startling. It’s as if some Americans are ready to fight a second civil war, using the first one as a pretext.
I don’t oppose changing college dormitory names and removing statues that honor Confederate generals or soldiers. When decisions are reached after respectful discussions and peaceful consensus, such change is the lifeblood of democracy.
But the coercive demand for purity, enforced by violence, often feels staged for political effect aimed at Trump. The surge of sensitivity seems especially odd given that the issue was not as prominent during the tenure of Barack Obama, America’s only black president.
On my trips to the South during the Obama years, including to North Carolina, where my daughter went to college, I was amazed at how many Confederate statues there are. As I recall, there is even a small Confederate cemetery and statue on the campus of the University of Virginia.
On one sightseeing trip around Durham, N.C., I saw the statue that was pulled down Monday, and was struck by its prominence. It had stood on a main street since 1924, unprotected and unmolested.
But Monday, the statue was pulled to the ground, kicked and spat on. The scene resembled the felling of Saddam Hussein statues after the liberation of Iraq — with one difference. Our Civil War ended more than 150 years ago.
Yet it is even now stirring emotions in New York. Two weeks ago, the Post reported that the Army rejected a request to rename streets at Brooklyn’s Fort Hamilton that honor Confederate generals Robert E. Lee and Stonewall Jackson, who were stationed there in the 1840s.
Rep. Yvette Clarke vowed to keep fighting for the change, saying “These monuments are deeply offensive to the hundreds of thousands of Brooklyn residents and members of the armed forces stationed at Fort Hamilton whose ancestors Robert E. Lee and Stonewall Jackson fought to hold in slavery.”
She’s right, but the Army also made an important point. It said the generals are part of military history and street-name honors were made “in the spirit of reconciliation” after the war.
That spirit of reconciliation, reflected in the lenient terms of military surrender at Appomattox Courthouse, was captured by President Lincoln at his second inaugural. Speaking on March 4th, 1865, as the war was winding down and 40 days before his assassination, Lincoln recounted in somber eloquence the horror that had befallen both North and South with the clear suggestion it was divine punishment for the sin of slavery. He concluded with these remarkable words:
“With malice toward none, with charity for all, with firmness in the right as God gives us to see the right, let us strive on to finish the work we are in, to bind up the nation’s wounds, to care for him who shall have borne the battle and for his widow and his orphan, to do all which may achieve and cherish a just and lasting peace among ourselves and with all nations.”
Should Lincoln and his ideals also be torn down and trashed? Have our divisions become so deep that the only way to settle them is with another Civil War?

Anne Swern, a Democratic candidate for Brooklyn DA, is suing the city for $5 millionover a slip-and-fall accident. She claims she stepped into a “depression” on a sidewalk and broke her hand in 2015.
It hurts “in the rain and it’s still tight,” she told the Post.
That ought to get her the tort lawyers vote, but taxpayers might not be so sympathetic.

Do as we say, not as we pay

They have no shame.
Liberal Democrats in congress want to raise the federal minimum wage to $15 an hour, but of the 184 co-sponsors of a bill to do that, at least 174 pay their interns zero, nada, nothing.
The findings come from the Employment Policies Institute, which labeled its report “Compensation Hypocrisy on Capitol Hill.”
Shock — but no surprise. Congress often exempts itself from the laws it imposes on other Americans.

Anybody see a link between these two headlines?
Feds Collect Record Taxes…
Household Debt Hits Record…
Source>http://nypost.com/2017/08/15/the-startling-reality-facing-america-in-wake-of-virginia-white-power-rally/
Posted by theodore miraldi at 7:51 AM