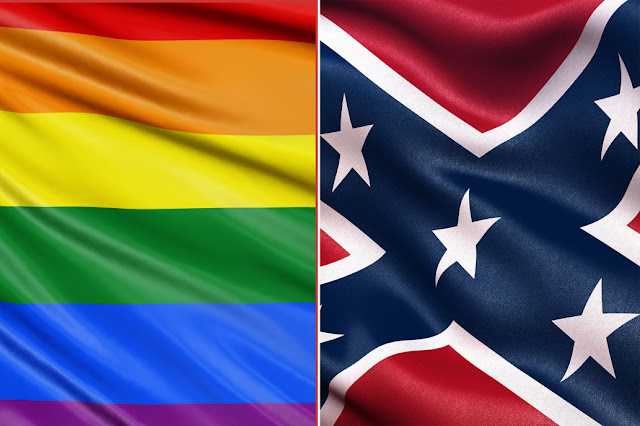 
A group of students and parents in Alabama is calling for the removal of a rainbow pride flag from a high school classroom — arguing that it can be compared to displaying a Confederate flag.
“We strongly feel that it creates a hostile and provocative learning environment for students not comfortable to openly supporting the LGBTQ+ community in a public school where students come from diverse political and religious backgrounds,” a Change.org petition reads about the flag in Auburn.
More than 800 people have signed the petition demanding the flag on display just outside of a classroom at Auburn High School be taken down.
The flag was hung last week during a school fair for the school’s Educate club, which promotes diversity, according to NBC affiliate WSFA.
“We believe it is unprofessional and distracting for a teacher to be so openly displaying their political views in an unbiased and socially neutral public setting,” the petition says, adding that “subjecting or explicitly exposing students from diverse political backgrounds to political views differing from theirs can make students uncomfortable and distract them.”
The petition — started by Andrew Monk and directed at Principal Shannon Pignato – compares the pride symbol to the Confederate flag.
“[T]he signers of this petition would like for you to consider the uproar and chaos that would ensue were a teacher to hang for example a Confederate, Christian, or Heterosexual Flag in their classroom,” the petition says.
“There would likely be protests, emails from teachers, and threatening of lawsuits from parents with differing viewpoints. As such, one does not see teachers hanging these flags in classrooms due to the same argument that it is unprofessional and can create a hostile and unideal learning environment.”
A school spokesman told NBC News in a statement that no one has come forward to present the petition to the principal.
“[Principal Pignato] is aware of the situation and is working with staff and students to address the concerns. While we are aware of the online petition, there is not a controversy at our school,” the statement said
A counter-petition against the original petition has sprung up on Change.org, garnering much more traction with more than 6,690 supporters.
“Auburn High School is a diverse and equitable school recognized for its achievements in education,” the counter-petition reads.
“In the real world, to suggest individuals be isolated from differing political views is an absurdity. To be made uncomfortable by opinions differing to your own is to function as a modern human. Attempting to insulate a student from political discourse would be an insult to their intelligence,” it continues.
The petition goes on to say: “Lastly, and most importantly, the pride flag and the AHS Educate club has served to provide a healthy environment for our LGBT+ peers to feel comfortable being who they truly are. The flag represents this safe space, and frankly, the sentiment for removing the pride flag is an affront to the work that has been done nationally to fight for recognition of the community.”
Source>http://nypost.com/2017/08/24/students-calling-for-removal-of-lgbt-flag-liken-it-to-rebel-flag/
Posted by theodore miraldi at 3:38 PM