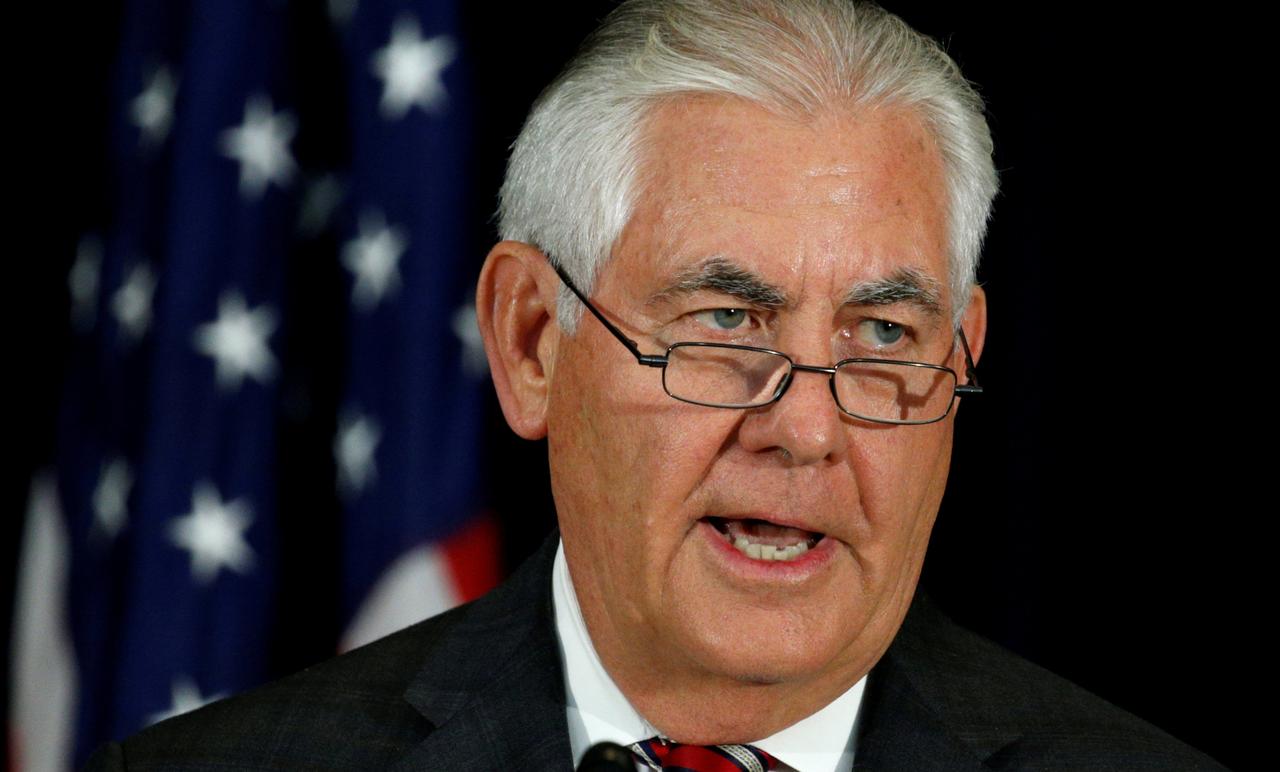 
President Trump's warning of coming "fire and fury" was meant to send "a strong message" to North Korean despot Kim Jong Un, Secretary of State Rex Tillerson said on Wednesday.
Tillerson said Trump's brawny rhetoric putting the rogue regime on notice was needed, given North Korea's disregard of international alarm over the country's nuke program.
"I think what the president was doing was sending a strong message to North Korea in language that Kim Jong Un would understand, because he doesn’t seem to understand diplomatic language," Tillerson said while en route to Guam, the U.S. territory specifically threatened by Kim Jong Un on Tuesday. "I think the president just wanted to be clear to the North Korean regime that the U.S. has an unquestionable ability to defend itself, will defend itself and its allies and I think it was important that he deliver that message to avoid any miscalculation on their part."
Tillerson's comments come as Japan is marking the 72nd anniversary of the atomic bombing of Nagasaki amid threats of a new bombing in the region resulting from the growing tension between the U.S. and North Korea.
Nagasaki Mayor Tomihisa Taue said the fear of another bomb attack is not in the distant future and urged nuclear states to abandon their weapons. He criticized Japan's national government, being under the U.S. nuclear umbrella, for not contributing to the U.N. nuclear arms ban treaty.

Expand / Collapse
Doves fly over the Statue of Peace at Nagasaki Peace Park in Nagasaki, southern Japan, during a ceremony to mark the 72nd anniversary of the world's second atomic bomb attack, Aug. 9, 2017.  (Nozomu Endo/Kyodo News via AP)
Taue demanded that the Japanese government join the recent treaty adopted by 122 U.N. member nations in an effort to achieve a world without nuclear weapons.
The declaration was made Wednesday during Nagasaki’s annual memorial ceremony, known as its Peace Declaration.
Taue called Japan’s stance “incomprehensible” while addressing the crowd.
"[The Japanese government's] stance of not even participating in the diplomatic negotiations for the Nuclear Prohibition Treaty is quite incomprehensible to those of us living in the cities that suffered atomic bombings," Taue said at the city's Peace Park, the Japanese newspaper the Mainichi reported.
"As the only country in the world to have suffered wartime atomic bombings, I urge the Japanese government to reconsider the policy of relying on the nuclear umbrella and join the Nuclear Prohibition Treaty at the earliest possible opportunity," he added.
Taue sharply criticized Prime Minister Shinzo Abe's government for what he said were empty promises about working to achieve a nuclear-free world. He said Japan's absence even during diplomatic negotiations for the U.N. Nuclear Prohibition Treaty, adopted in July, is "incomprehensible to those of us living in the cities that suffered atomic bombings."
He also commented on recent fears of North Korea’s nuclear capabilities.
"The international situation surrounding nuclear weapons is becoming increasingly tense," Taue said. "A strong sense of anxiety is spreading across the globe that in the not too distant future these weapons could actually be used again."
The remarks came at a time in which international tensions are high.
Pyongyang and Washington have traded escalating threats. President Donald Trump threatened North Korea "with fire and fury" and North Korea's military said Wednesday it was examining its plans for attacking Guam.
The threats, between the North Korean Army and Trump, came shortly after a report that the regime has produced a compact nuclear warhead that could fit on a missile capable of reaching the United States.
Speaking Tuesday at his golf resort in Bedminster, New Jersey, Trump vowed to unleash “fire” and “fury.” He said North Korea’s threats of nuclear war “will be met with fire, fury and frankly power, the likes of which the world has never seen before.”
North Korea soon fired back with a threat of its own. The Korean People’s Army claimed in a statement that it was looking into a plan to hit Guam, a U.S. territory, with missiles that would create an “enveloping fire” around the island.
The U.S. launched the world's first atomic attack with a bomb dropped Aug. 6, 1945, that killed 140,000 people in Hiroshima. The bombing of Nagasaki three days later killed 70,000 more.
Japan surrendered six days after the bombing of Nagasaki, prompting the end of World War II.
The combined number people who survived either bombing — known in Japan as "hibakusha," stood at 164,621 as of March. Their average age was 81.
“Everything was burning,” said Sanae Ikeda, a hibakusha who recently spoke with the Seattle Times.
Ikeda recalled the rumble of the plane as it flew over Nagasaki, as well as the flash of light and the shock wave that knocked him out cold. He also recalls that when he came to, the sky was blocked by thick smoke, and glowed red after it cleared.
Earlier that day, Ikeda, who was just a child at the time, was told to stay home with his brothers and sisters by his mother before she headed out to pick up food, but he didn’t listen and went after his mother and pleaded to go along with her. They wound up a mile from the epicenter of the explosion, saving their lives. Within days, however, his five siblings were dead.
The Associated Press contributed to this story.
Source>http://www.foxnews.com/world/2017/08/09/nagasaki-marks-anniversary-bombing-amid-us-north-korea-nuclear-tensions.html
Posted by theodore miraldi at 10:21 AM