It appears Islamists have something in common with statue vandals besides an ideology that justifies political violence and a rabid hatred of free expression: the desecration of historic monuments. 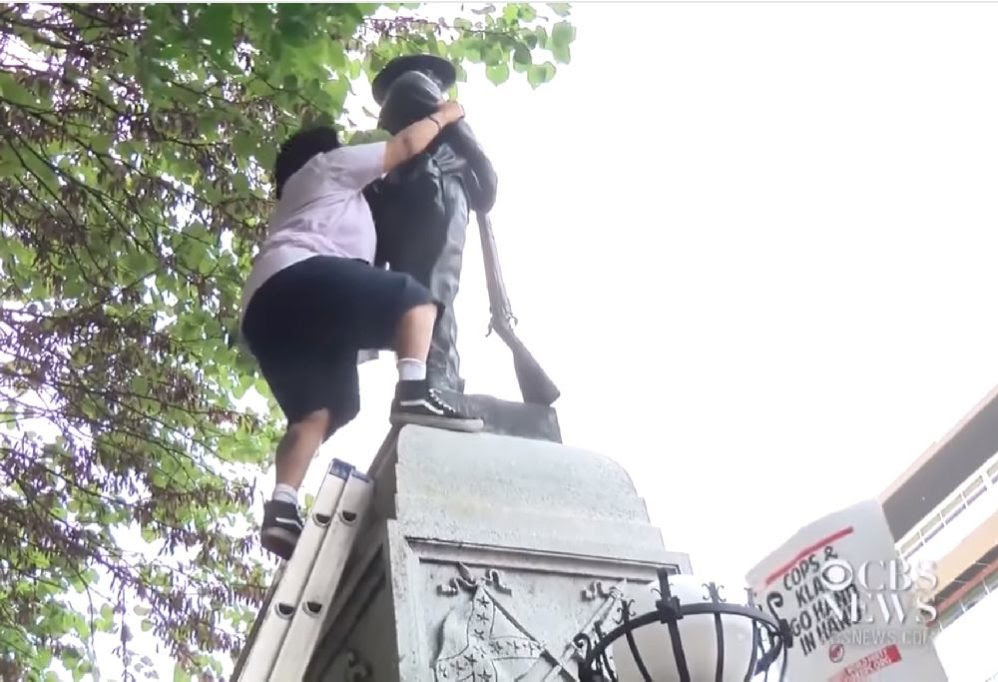 
In the wake of the Charlottesville riots ostensibly triggered by the removal of a statue memorializing Confederate Gen. Robert E. Lee, a rash of vandalism against historical American figures has hit the country. Monday, someone took a sledgehammer to a 200-year-old Christopher Columbus monument in Baltimore.
View image on Twitter 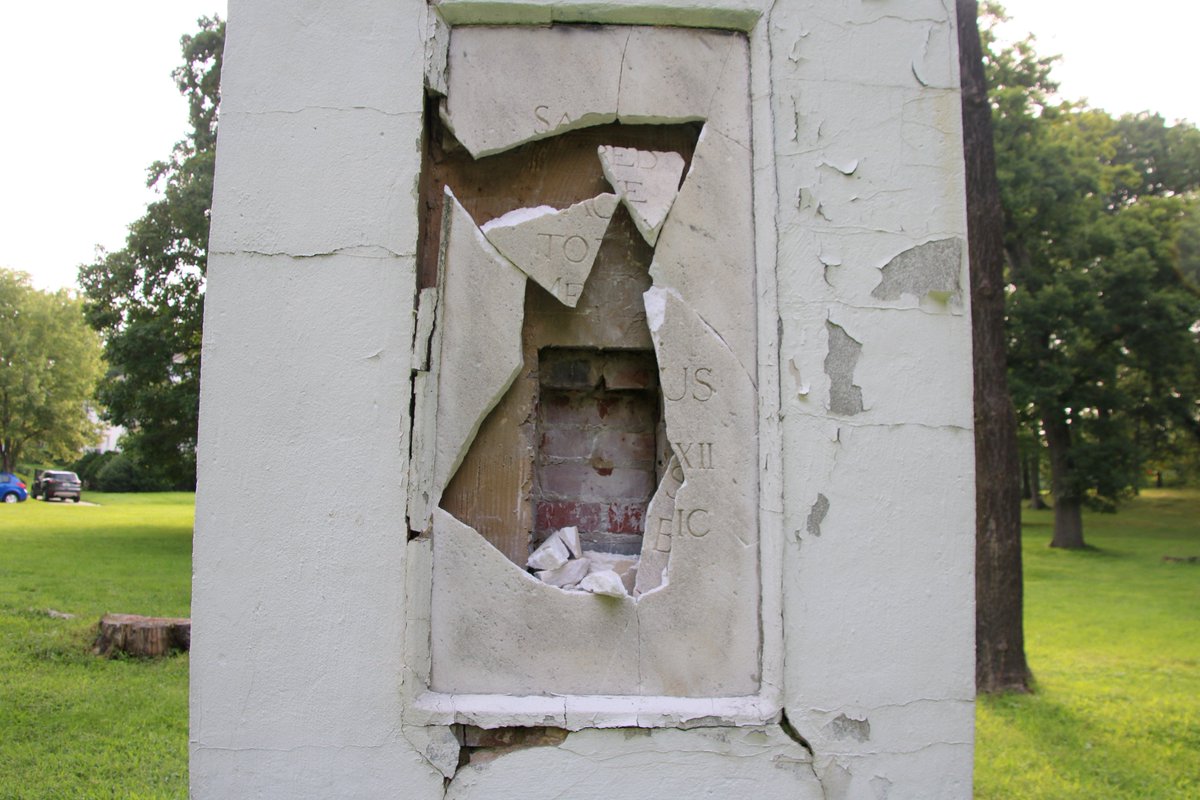 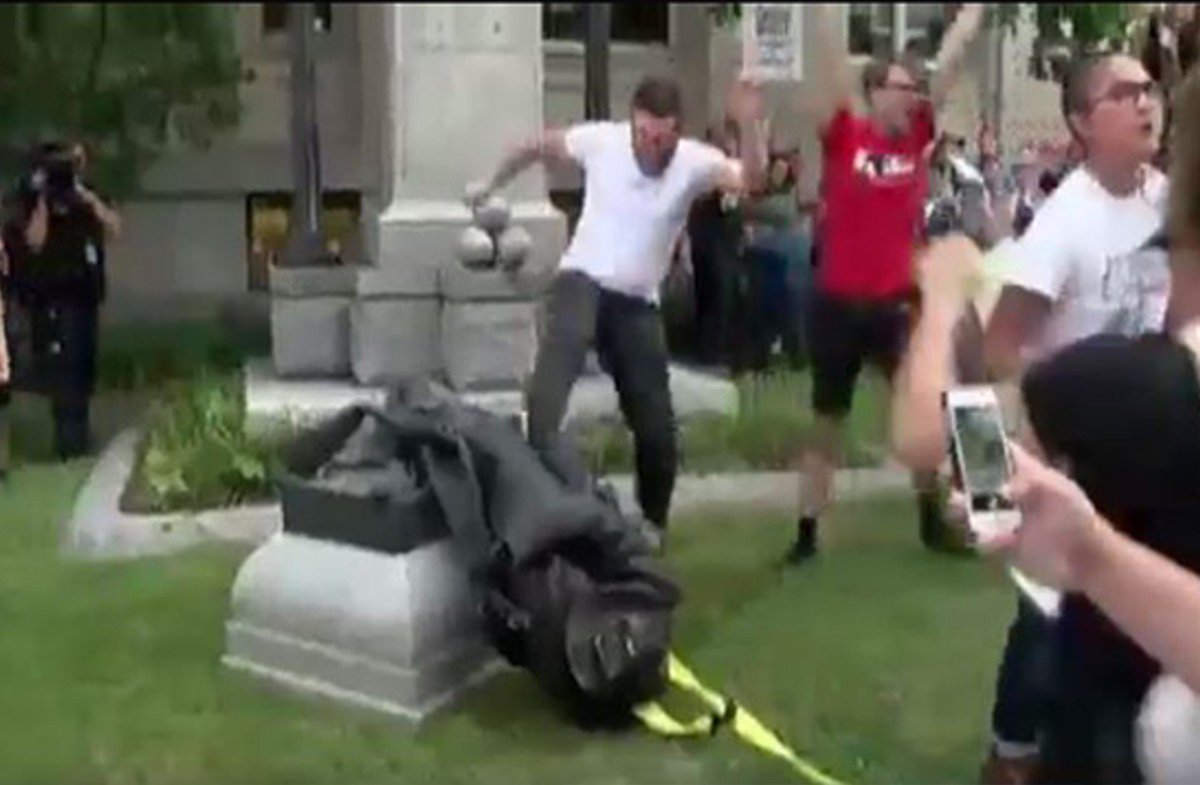 Twitter Ads info and privacy
In California on Thursday, a statue of Junipero Serra was defaced with red paint and the word “Murder,” as well as a swastika.
View image on Twitter 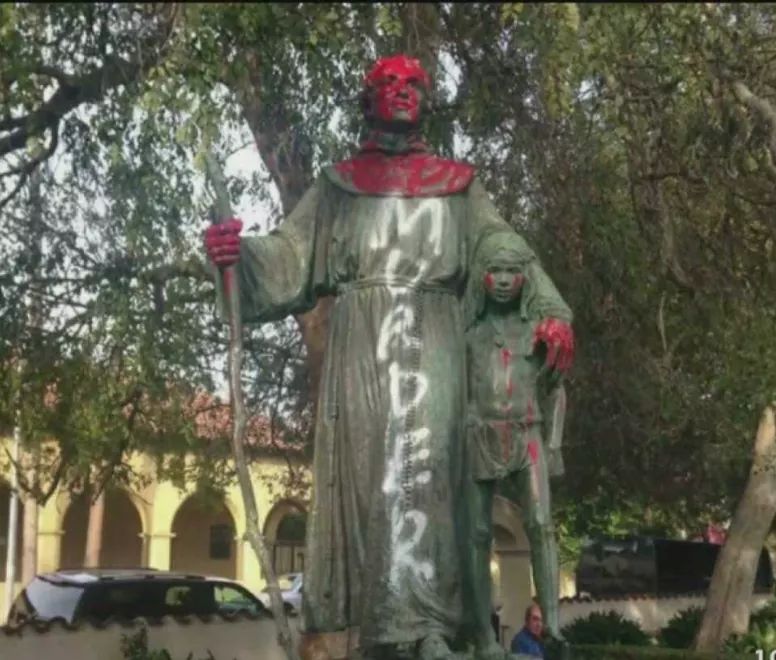 Twitter Ads info and privacy
Duke University officials removed a statue of Robert E. Lee from the campus chapel Saturday after vandals knocked off parts of his face.
View image on Twitter 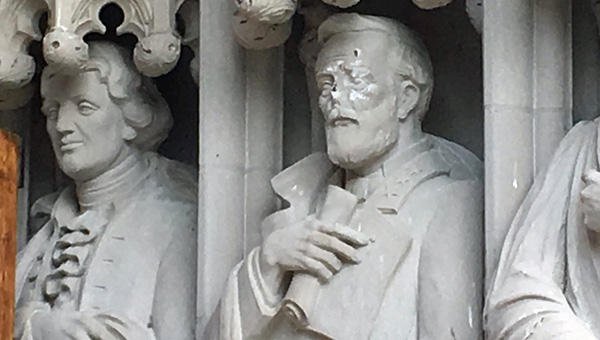 Dr. Carol M. Swain @carolmswain
Why aren't we arresting the anti-American anarchists? Their vandalism of other people's property is an affront to... http://fb.me/13KtU7yFs

The graffiti appeared to say “[expletive] law,” according to the National Park Service.
washingtonpost.com

Twitter Ads info and privacy
In Boston, a statue of Christopher Columbus was coated in red paint and emblazoned with “Black Lives Matter.”
View image on Twitter

Twitter Ads info and privacy
A Kentucky statue memorializing the founder of the American Saddlebred Horse Association was doused in orange paint the day after Charlottesville’s riots because John Breckinridge Castleman was a major in the Confederate Army. He also later served in the U.S. Army and was pardoned by President Andrew Johnson, a Democrat. But his positive contributions to the Union and Kentucky matter nothing to some protesters, who a week later draped the statue with signs reading “No room for racism” and “Take it down.”

Christopher Kolb @cmkolb
Thank you to whoever did this. The Castleman statue needs to be torn down immediately. Imagine having a memorial to an SS officer in 2017.

Twitter Ads info and privacy
Leftist protesters in the United States and abroad also are after monuments depicting Joan of Arc:

Raymond Arroyo  ✔@RaymondArroyo
Disgraceful...a study in ignorance and cultural barbarity. Some fool wants to tear down my favorite statue in NOLA. https://aleteia.org/2017/08/17/joan-of-arc-caught-up-in-statue-toppling-movement/ …

Joan of Arc caught up in statue-toppling movement

The golden equestrian statue of St. Joan of Arc, the Maid of Orleans, stands on Decatur Street in New Orleans’ historic French Quarter. A gift from France in 1972 to honor the city’s French heritag…
aleteia.org

Twitter Ads info and privacy
This sort of wanton iconoclasm had until recently been largely the domain of Islamic terrorists. ISIS is well-known for gleefully destroying some of the world’s oldest treasures as part of its religious war. Now, it appears, they have something else in common with leftist statue vandals besides an ideology that justifies political violence and a rabid hatred of free expression: the desecration of historic monuments. In one latest example, the Islamic State cell that committed this month’s terror attacks in Spain had originally aimed at the historic Sagrada Familia Basilica, only failing to carry out their plan because of a providential accident with their bomb supplies.

Graeme Wood  ✔@gcaw
The Barcelona attackers were thinking big -- truck-bombing Sagrada Familia -- but scaled back out of frustration: https://www.thelocal.es/20170819/terrorist-cell-planned-to-attack-sagrada-familia-las-ramblas-and-barcelona-port …

Police believe that the jihadist cell responsible for the attacks in Barcelona and Cambrils that left 14 dead and more than 100 injured were originally planning something much bigger involving...
thelocal.es

Twitter Ads info and privacy
Wherever ISIS conquers territory, they destroy artifacts that would preserve historical memories for posterity. Here’s CNN on that phenomenon two years ago, citing a United Nations statement calling this cultural destruction “war crimes.”
The desecration of sacred and public art reveals what both groups consider their most bitter enemy. For Islamists, it’s all that is not Islam, especially Christians, Jews, and the United States. For the U.S. vigilantes pulling down statues, it’s also the United States: Its history, people, traditions, religious and political connections with Christianity, and animating ideas. In their secularist version of hatred for “the great Satan,” they consider the United States, as the demonstration chant summarizes handily, “Racist, sexist, anti-gay!” This is their Marxist creed, and at root it is diametrically opposed to America’s essence as a creedal nation “dedicated to the proposition” thatall men are created equal, that they are endowed by their Creator with certain unalienable Rights, that among these are Life, Liberty and the pursuit of Happiness. — That to secure these rights, Governments are instituted among Men, deriving their just powers from the consent of the governed.
It is this founding proposition that Americans paid in blood during the Civil War to rectify and deliver to our African-American brothers and sisters whom some Americans had brutalized in violation of our social covenant. They did so, as Abraham Lincoln said, to fulfill the promise of our founding ideals, rather than repudiate them, as today’s agitators seek.
While the conflict with the highest body count in all of American history, that war proved not enough. So the protesters of the Civil Rights era also came, as Martin Luther King Jr. declared, “to cash a check. When the architects of our republic wrote the magnificent words of the Constitution and the declaration of Independence, they were signing a promissory note to which every American was to fall heir. This note was a promise that all men would be guaranteed the inalienable rights of life, liberty, and the pursuit of happiness.” The civil rights marchers came not to abolish America, but explicitly to fulfill its promises through the proper channels of public persuasion and law-making, not rioting and vandalism. America once again paid up.
This is fundamentally why statue desecration is both wrong and un-American. These demolitions were not conducted under rule of law or by consent of the governed, as was the case in Charlottesville’s removal of the Lee statue. They’re conducted in the dead of night by criminals whose acts express contempt for America’s social contract. Like the masked vigilantes attacking peaceful fellow citizens and police officers in the name of anti-bigotry, these vandals place themselves above the law and in so doing express contempt for their fellow citizens and the “democracy of the dead” that gave us the America in which they live safely and prosperously, and when brought to justice will ensure their punishment proceeds in accord with their civil rights.
It is sobering to think that even our most prominent and deserving leaders are capable of such great evils.
Two final observations. These rioters have not inexplicably gone nuts. They have been cultivated in ignorance and hatred by largely taxpayer-funded education institutions as well as media institutions also populated by mal-educated university graduates. The history taught to American young people centers on the same false and bigoted oppression narratives we see spilling into the streets in signs like “Cops and Klan go hand in hand.” The civics education programs from elementary through college levels are imbued with factually false anti-American indoctrination.
American taxpayers are paying for our children to be taught to hate America, plain and simple. It is long past time for lawmakers to stop enabling this situation as, for example, Texas did last week by dropping yet another school choice bill. School choice that does not extend ideological control through overregulation undercuts the progressive monopoly that has deformed U.S. education for decades. Yes, I did write a book about this, get the research here.
Lastly, of course young people need to know, in age-appropriate ways, the truth about history — the whole truth. Thomas Jefferson held slaves and due to his financial profligacy could not free them, but also wrote the words that ultimately not only ended slavery in America but also made the United States ensure equality before the law to all citizens in a signal development for humankind that many nations have still not made. Christopher Columbus’s celebrity went to his head and after discovering the American continent he became a slave trader. In fact, because of his inability to restrain his men’s brutality he lost his governorship of the West Indies and was recalled to Spain by its Catholic monarchs. His Caribbean discoveries also ultimately led to ending the widespread human sacrifice practices of Central America natives.
This is the truth, and it is sobering. It is sobering to think that even our most prominent and deserving leaders are capable of such great evils. It ought to give us humility about what we can expect from ourselves, and to beware both leadership positions and good intentions, for history teaches where they often lead.


But telling the truth about our ancestors should not mean discounting everything they ever did, for if we do that for any person, including ourselves, we all have nothing to do but go home and weep. If we discount achievements because those who perform them are imperfect, there will be no achievements, only darkness. That creates a world of always tearing down and never building up, and the end of it is annihilation. In life is both great joy and great sorrow, and both deserve their due. That is what monuments are for.
Source>http://thefederalist.com/2017/08/22/vandals-destroying-monuments-theyve-taught-hate-america/
Posted by theodore miraldi at 8:23 AM