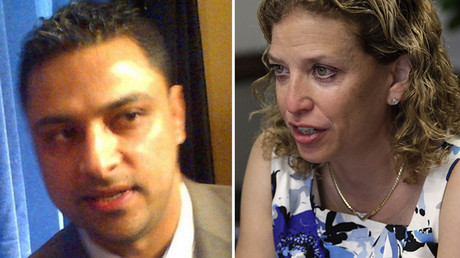 The federal case against Imran Awan, a former IT aide for Democratic Florida Rep. Debbie Wasserman Schultz, expanded Thursday with an indictment on four counts including conspiracy and making false statements.
He originally was charged with a single bank fraud count; his wife Hina Alvi also was indicted Thursday.
The grand jury decision in U.S. District Court for the District of Columbia comes roughly a month after Awan was arrested at Dulles airport in Virginia trying to board a plane to Pakistan, where his family is from.
Awan and other IT aides for House Democrats have been on investigators’ radar for months over concerns of possible double-billing, alleged equipment theft, and access to sensitive computer systems. Most lawmakers fired Awan in February, but Schultz had kept him on until his arrest in July.
The indictment itself, which merely represents formal charges and is not a finding of guilt, addresses separate allegations that Awan and his wife engaged in a conspiracy to obtain home equity lines of credit from the Congressional Federal Credit Union by giving false information about two properties – and then sending the proceeds to individuals in Pakistan.
The case has put renewed scrutiny on Wasserman Schultz for keeping Awan on the payroll for months, even after a criminal investigation was revealed and he was barred from the House IT network.
Awan and other family members for years had a lucrative arrangement for IT-related work on Capitol Hill for House Democrats. According to The Daily Caller, the members of the Pakistani family made at least $4 million since 2009.
In a recent interview published in the Sun Sentinel, Wasserman Schultz blamed the “right-wing media circus fringe” for the attention on Awan.
The former head of the Democratic National Committee suggested it's all part of an effort to distract from the investigation of Russian meddling in the 2016 campaign and possible ties to President Trump's team.
“Any opportunity they can to pull people’s eyes and ears away from that they take,” Wasserman Schultz told the newspaper.
Her colleagues in Congress, though, say there are serious security implications in her former staffer's case.
“We have to investigate how our systems may have been compromised,” Rep. Ron DeSantis, R-Fla., recently told “Fox & Friends.”
Though Awan was barred from the IT network, Wasserman Schultz’ spokesman David Damron told Fox News their office worked with the House Chief Administrative Officer to arrange for the employee to keep providing “valuable services without access to the House network.”
Awan, 37, of Virginia, earlier pleaded not guilty to a single count of bank fraud.
Attorney Christopher Gowen told Fox News  that federal authorities have no evidence of misconduct by Awan relating to his IT duties.
Fox News’ Jake Gibson contributed to this report.
Source>http://www.foxnews.com/politics/2017/08/18/case-against-wasserman-schultz-ex-it-aide-expands-with-4-count-indictment.html
Posted by theodore miraldi at 7:54 AM