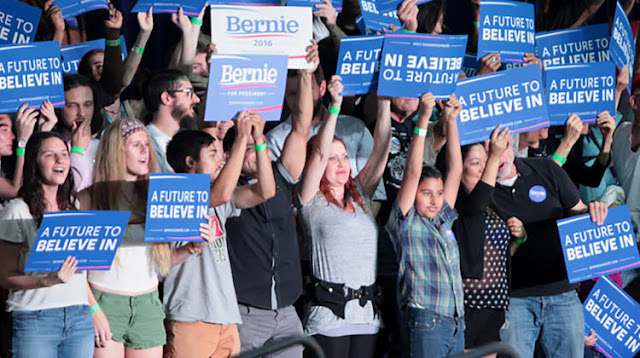 Sanders voters rail against the Democratic 'Establishment' and saying they're party


Ardent supporters of Sen. Bernie Sanders (I-Vt.) lashed out at the Democratic Party establishment and threatened to bail on the party after a federal judge in Florida dismissed a class-action suit Friday alleging that the Democratic National Committee (DNC) illegally favored Democratic presidential nominee Hillary Clinton over Sanders.

The DNC’s treatment of Sanders, who switched his party affiliation to run in the 2016 Democratic primaries, came under scrutiny after the 2016 hack into the DNC’s servers revealed that key party officials favored the more traditional Clinton over the progressive Sanders. But on Friday, Ronald Reagan appointee Judge William Zloch dismissed what Sanders’ supporters referred to as the “DNC Fraud Lawsuit” in a 28-page decision.

"To the extent plaintiffs wish to air their general grievances with the DNC or its candidate selection process, their redress is through the ballot box, the DNC's internal workings, or their right of free speech — not through the judiciary," Zloch wrote. "To the extent plaintiffs have asserted specific causes of action grounded in specific factual allegations, it is this court's emphatic duty to measure plaintiffs' pleadings against existing legal standards."

Zloch ultimately found that the "plaintiffs have not presented a case that is cognizable in federal court," noting that it was beyond the court's legal jurisdiction to decide "whether plaintiffs have suffered a concrete injury particularized to them, or one certainly impending, that is traceable to the DNC and its former chair's conduct."

"The court holds that they have not, which means the truth of their claims cannot be tested in this court," Zloch concluded, although he noted that "in evaluating plaintiffs' claims at this stage, the court assumes their allegations are true — that the DNC and Wasserman Schultz held a palpable bias in favor [of] Clinton and sought to propel her ahead of her Democratic opponents."

Miami lawyers Jared and Elizabeth Beck filed a class-action suit against both the DNC and its former chairwoman, Rep. Debbie Wasserman Schultz (D-Fla.), in U.S. District Court for the Southern District of Florida on June 28, 2016. The Becks said they filed the suit on behalf of other Sanders supporters across 45 states who believed that Schultz had "rigged" the primaries and exhibited "intentional, willful, wanton, and malicious" conduct in violation of Article 5, Section 4 of the DNC Charter.

The plaintiffs represented three main classes: DNC donors, Sanders donors, and registered Democrats across the board who wanted back the money they gave to the DNC .

DNC lawyer Bruce Spiva argued in court back in April that "there's no contractual obligation here" between the donors and the DNC, claiming that "it's not a situation where a promise has been made that is an enforceable promise."

Although many Sanders supporters felt bitterly betrayed by the DNC and the party establishment after the hackers released the emails, the mainstream media largely appeared to ignore the party's inner drama.

"For Sanders supporters, the lawsuit provides an opportunity for vindication for being cheated and attacked by the Democratic establishment," Michael Sainato, a reporter for the Observer, wrote back on May 8. "Now, the DNC is on record arguing that its voters have no reason to trust it to maintain free and fair elections."

After Zloch dismissed the suit, Sanders supporters and progressives flocked to the DNC Fraud Lawsuit's Facebook page to voice their grievances and express their frustrations with the Democratic Party. While some pledged to never donate money to the DNC ever again, others promised to bail on the party and support other candidates.

Facebook user Vicki L Nulik Morrison argued Friday on the Facebook page that the suit "was worth it just to hear the DNC say in court that they didn't have to play fair or even follow their own guidelines."

"They admitted they are crooks and they will NEVER see another dime of my money," Nulick Morrison continued. "I understand they are having a hard time raising money! That suits me just fine!! I hope they go broke."

"This is basically the reason I Dem-exited. The party itself can do what it wants. The primaries are a sham, and the courts just upheld the sham. Sad day for voters, but they told us clearly they [the DNC] and only they can decide for us who will be the candidate for president," Facebook user Mary Acosta Granger wrote.

"If DNC wants to dictate the leadership's pick for candidate, then the taxpayers should not have to pay for the primary or caucuses," user Carol Preston wrote.

"Not voting dem ever again even IF Bernie or another progressive ran as a dem," user Jennifer Perez wrote.

"Wow! I guess the DNC does not want us to have a choice after all. Just pay back the money and give us a public apology. Then maybe I will consider voting Dem again. At least in one way the [Republican National Committee] was honest," user Craig Hahn wrote.

"I'm sad for our democracy. They tricked and bamboozled folks that thought the [DNC] was giving us a clear choice between two candidates, but they were making their backroom deals, and knew exactly who they were going to run as their presidential candidate," user Maya Grafmuller wrote. "Either I didn't read the small print, or they blatantly deprived me of an actual choice of candidate! I want my money back."

Posted by theodore miraldi at 11:45 AM