A TURNING POINT in the Trump Presidency 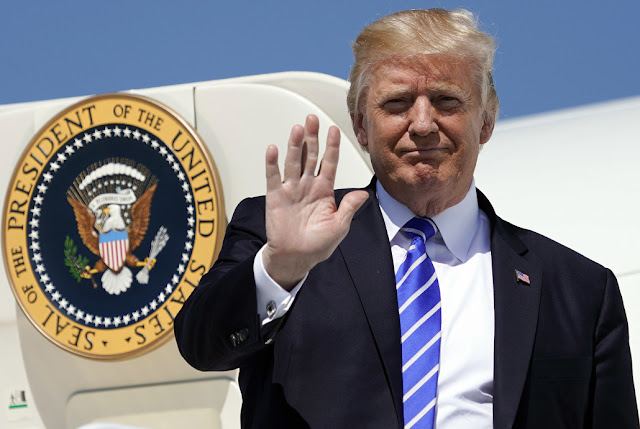 Keep these numbers in mind: 316 to 90 and 80 to 17. They were the lopsided votes in the House and Senate in support of the deal President Trump made with Democratic leaders on storm aid, the debt limit and government funding.
Remarkably, all the no voters were Republicans.
The numbers shout that we are witnessing a potential turning point in the Trump presidency, one that could further shake up Washington and rattle the calcified political parties.
Frustrated by the failure of GOP majorities in both chambers to pass his agenda, Trump followed through on threats to work with Democrats.
Signs suggest it was not a one-off deal, as the president already is discussing other topics with Chuck Schumer and Nancy Pelosi.
Hurricanes Harvey and Irma helped spark his decision. Trump was clear that, especially on storm relief, he wanted fast, bipartisan action that reflected the way ordinary Americans were helping each other, especially in hard-hit Houston. With Irma aiming at Florida and the southeast, the president recognized that the public would have rightly viewed political squabbling during national emergencies as an infuriating failure.
Still, the circumstances didn’t stop all the GOP grumbling, with some Republicans astonished that a president from their party had accepted Dems’ terms on the debt limit to get a quick deal. Not surprisingly, Trump was hardly apologetic, firing back on Twitter: “Republicans, sorry, but I’ve been hearing about Repeal & Replace for 7 years, didn’t happen!” — a reference to the failure to overturn ObamaCare.
He also issued a warning on tax reform, tweeting: “Republicans must start the Tax Reform/Tax Cut legislation ASAP. Don’t wait until the end of September. Needed now more than ever. Hurry!”
The developments show the president shedding the party straitjacket and being true to his disrupter candidacy. If he continues and is successful, he could create a new coalition that includes revolving members of both parties, depending on the issue.
That’s an ambitious scenario, given the hyper-partisan atmosphere in Washington and the cultural and political chasms across the country. But at least the president is proving in the short term that it is possible to get things done — and get them done quickly, a point he emphasized by signing the legislative package as soon as it reached his desk.
Naturally, the prospect of a bipartisan approach alarms both ends of the political spectrum, with leftists angry that Schumer and Pelosi dared to even talk to Trump, let alone make a deal. That attitude is both a cause and effect of the gridlock that has gripped the capital for the better part of two decades and turned compromise into an insult.
Yet beyond the professional activists, ideologues and consultants, much of America yearns for more government cooperation and less combat.
Like children watching their parents fight, most voters just want a productive peace, not an endless battle for ­total victory that yields nothing of common value.
Above all, they want a government that works for them, not one fixated on partisan scorekeeping and ideological litmus tests.
But it would be Pollyannaish to think that gridlock is just a big misunderstanding that can be resolved at a beer summit. There are legitimate differences between the parties’ reigning philosophies, and most major issues do not lend themselves to simply splitting the difference.
Debts and deficits, for example, can’t be resolved without goring somebody’s ox, and lawmakers are elected on the promise to make sure their backers are spared the bloodletting.
Tax reform is another issue that won’t go quietly. There’s a reason why there hasn’t been an overhaul of the revenue system since 1986.
Then there is the fact that gridlock offers advantages to incumbents. It allows them to raise money and hold onto their jobs by pledging purity, no small matter when everything from gerrymandering to technology means most pols are threatened more by primary opponents than by general elections.
But the big picture is that most Americans feel government in general and Washington especially has little concern for their lives and problems.
The tiresome duels of rehearsed talking points that offer no possibility of compromise reflect a broken model of politics.
Indeed, Trump’s promise to change Washington was a key ingredient in his victory, and he may be uniquely positioned to carve out a new model. Throughout his business life, he’s been on both sides of big issues, and comes to the presidency with less of a fixed political core than anyone in ­recent memory.
That’s made him understandingly suspect to many conservatives and his inexperience has been compounded by mistakes, but that outsider, pragmatic perspective can now work in his favor. If he can find both common ground and real solutions, we might look back one day and see a more bipartisan approach to governing as the one silver lining of the weather calamities of 2017.
Source>http://nypost.com/2017/09/09/we-may-be-witnessing-a-turning-point-in-the-trump-presidency/
Posted by theodore miraldi at 9:12 AM