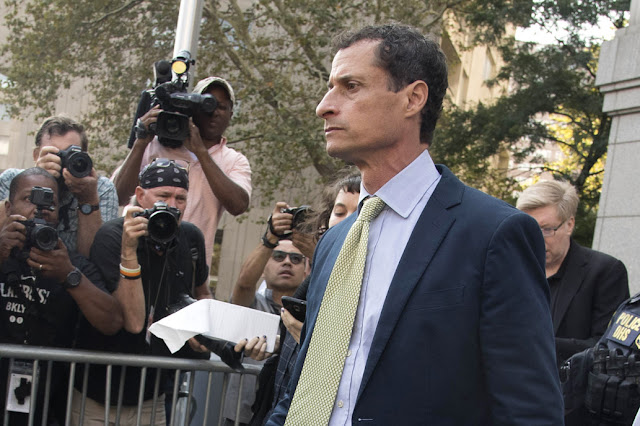 
It’s hard time for Anthony Weiner.
The disgraced ex-congressman broke down crying as he was sentenced to 21 months in prison Monday for convincing a high school student to undress and touch herself via Skype in 2016.
“This was a serious crime. It’s a serious crime that deserves serious punishment,” Manhattan federal Judge Denise Cote said as the convicted sext fiend dropped his head into his hand and wept.
After the courtroom cleared, Weiner sat crying in his chair with his lawyers patting him on the back. His mom also sat crying on the bench behind him, sitting next to Weiner’s brother Jason and Weiner’s dad.
His father and brother also joined him in the courtroom — but the serial sexter’s soon-to-be ex-wife, Huma Abedin, was nowhere to be seen.
In addition to his prison stint, Weiner was sentenced to pay a $10,000 fine for his crime, participate in sex offender outpatient treatment and spend three years on supervised release once his sentence is up.
He will have to surrender to his designated facility by Nov. 6 — his lawyer put in a request for Schuylkill Federal Correctional Facility in Pennsylvania, or another low-security prison near New York.
Weiner, 53, had faced as much as 10 years in the slammer after pleading guilty in May to one count of transferring obscene material to a minor. The feds said Weiner, a former congressman from Brooklyn, began a two-month sexting session with the North Carolina teen shortly after she messaged him on Twitter in January 2016.
He made a tearful last-minute plea for probation so he could continue his treatment, which includes sessions with Sex Addicts Anonymous.
“If I fail, I know what will happen,” Weiner said. “But with God’s grace, I will not.”
He argued that his online dalliance with the 15-year-old was due to his sick obsession with sexting strangers and addiction — rather than an obsession with underage girls — and claimed he had hit “rock bottom” and is now in recovery.
But prosecutors insisted that he needed to see the inside of a cell to get the message.
It’s just the latest chapter in the Democratic politician’s very public downfall, which started in 2011 when he was forced to resign from Congress following his first sexting scandal.
His 2013 run for NYC mayor also went up in flames when it emerged that he was still sexting under the alias “Carlos Danger.”
The feds said the latest and most insidious chapter of Weiner’s sexting problem began on the evening of Jan. 23, 2016, when a high school student messaged him on Twitter, prompting a flurry of “provocative” responses from the former public servant, who knew the teen was in high school, court papers show.
“As January turned to February, their intermittent exchanges grew more lascivious,” Manhattan federal prosecutors told the judge in court filings.
By the end of February, Weiner — who by this time knew the girl was only 15 — was video-chatting with her via Skype and using “graphics and obscene language” to ask her to “display her naked body and touch herself,” the feds said.
He also sent her “obscene material” on self-destructing messaging apps like Kik and Confide, including adult porn and a message “describing what he would do to her, if she were 18,” according to court filings.
In September 2016, the girl sold her story to British publication Daily Mail, and in May, he cried as he pleaded guilty to one count of sending obscene material to a minor.
Abedin finally filed for divorce on the same day he pleaded guilty.
Source>http://nypost.com/2017/09/25/anthony-weiner-gets-hard-time/
Posted by theodore miraldi at 12:56 PM