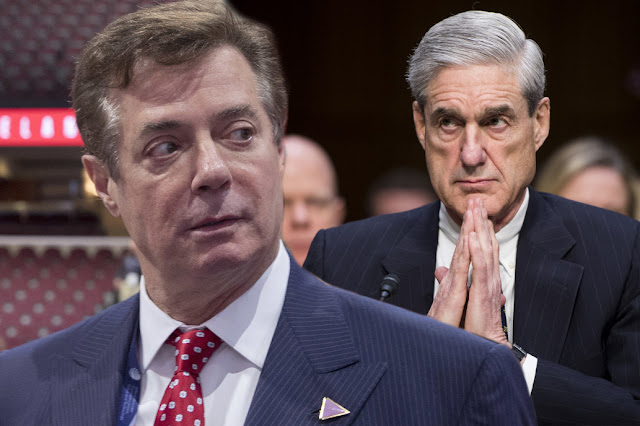 
Federal agents wiretapped the phone of President Trump’s former campaign chair Paul Manafort before and after the 2016 election — capturing conversations between the two men, according to a report on Monday.
The wiretaps — which came before a July raid on Manafort’s Virginia home — are now part of special counsel Robert Mueller’s intensive probe into the Trump campaign’s alleged connections to Russia, CNN reported.
The recordings allegedly contain communications that raised concerns with investigators that Manafort had encouraged Russian operatives to aid Trump’s campaign, according to the report, which added that sources said the evidence was inconclusive.
Manafort first became a target of the FBI in 2014 over his lobbying efforts on behalf of Ukraine.
That surveillance ended in 2016 for lack of evidence. But then the FBI got a new warrant as part of a probe into ties between members of the Trump campaign and possible Russian agents. That warrant extended into this year.
The wiretaps were authorized under a secret order by the Foreign Intelligence Surveillance Court and were provided to Mueller for his ongoing investigation.
Although Manafort has a residence in Trump Tower, it was not clear which of his phones were tapped under the warrant.
The revelations reignited a theory proposed by Trump in March.
He alleged that then-President Barack Obama had his “wires tapped” at Trump Tower during the campaign.
Obama responded by saying that White House officials did not order the surveillance of US citizens.
Those investigations were handled by the Justice Department.
Just months after Trump took office, Mueller’ s team convinced a judge to allow its investigators to enter Manafort’s home unannounced, The New York Times reported Monday.
The feds obtained the warrant by showing a judge that there was evidence of a crime in Manafort’s home, and also intimated he was likely to destroy the evidence if he had the chance, the Times said.
The feds then executed the raid in dramatic fashion early on July 26 by picking the lock on the front door while Manafort was in bed, the Times said.
The agents grabbed reams of documents stuffed into binders, while copying files from Manafort’s computer, and even snapping photographs of his collection of suits.
The FBI was looking for evidence that Manafort had maintained a secret offshore bank account — possibly to obtain money from Russian operatives.
Mueller’s investigators followed the raid by warning Manafort that they intended to indict him.
The raid was just part of the aggressive probe by Mueller and his team.
The investigation has widened to include not only the Russian collusion but also whether Trump associates have had any financial entanglements with Moscow, the Times said.
In addition to Manafort, ex- National Security Director Michael Flynn is being probed for his lobbying work on behalf of Turkey and his undeclared meetings and trips paid for by the Russian government.
There is also the issue of whether Trump obstructed justice when he fired then-FBI Director James Comey.
At the time, Comey was in charge of the investigation into Russia. As a result of Comey’s firing, Deputy Attorney General Rod Rosenstein appointed Mueller as special counsel.
Source>http://nypost.com/2017/09/18/fbi-allegedly-wiretapped-paul-manafort-before-after-election/
Posted by theodore miraldi at 8:19 AM