Feds: Every LEGAL Mexican Immigrant Sponsors SIX MORE to US


While President Trump has his eyes on curbing illegal immigration, federal rules are allowing legal immigrants to "sponsor" several more family members from their countries, according to the Department of Homeland Security.


The statistics analyzed by the Center for Immigration Studies find that sponsorships exceed initial immigration numbers.

Called "chain migration" because the first immigrant acts as a link to many others legally allowed to follow, the practice is having a huge impact on the U.S. Sponsors are "native-born citizens or naturalized citizens."

Jessica Vaughan, the director of policy studies at the Center for Immigration Studies, reported that in the last 10 years half the 10.6 million immigrants allowed into the country were "initiating" and the rest sponsored followers. Over the last 35 years, over 60 percent were sponsored. 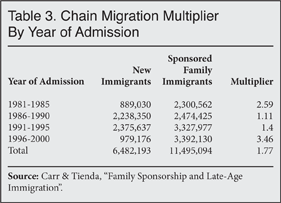 Her findings are even more alarming when considering the fate of some 800,000 recipients of the Obama-era Deferred Action for Childhood Arrivals. "Deferred Action for Childhood Arrivals (DACA) program is likely to increase chain migration in the future, as DACA beneficiaries eventually qualify for citizenship and the opportunity to sponsor their parents and siblings, many of whom also have been residing in the United States illegally," she wrote in the report.

Judging from preliminary administrative data, approximately 1,125,000 legal immigrants were approved for admission in 2016, which is about 7 percent higher than 2015, and one of the highest numbers in the last decade.

The largest categories of chain migration are spouses and parents of naturalized U.S. citizens because admissions in these categories are unlimited by law.

According to the most complete contemporary academic studies on chain migration, in recent years each new immigrant sponsored an average of 3.45 additional immigrants. In the early 1980s, the chain migration multiplier was 2.59, or more than 30 percent lower.

Of the top immigrant-sending countries, Mexico has the highest rate of chain migration. In the most recent five-year cohort of immigrants studied (1996-2000), each new Mexican immigrant sponsored 6.38 additional legal immigrants.

Enacting an amnesty for roughly 700,000 DACA beneficiaries is likely to add double that number in additional immigrants because of chain migration, as the amnesty beneficiaries sponsor their parents and other family members.

Posted by theodore miraldi at 10:11 AM