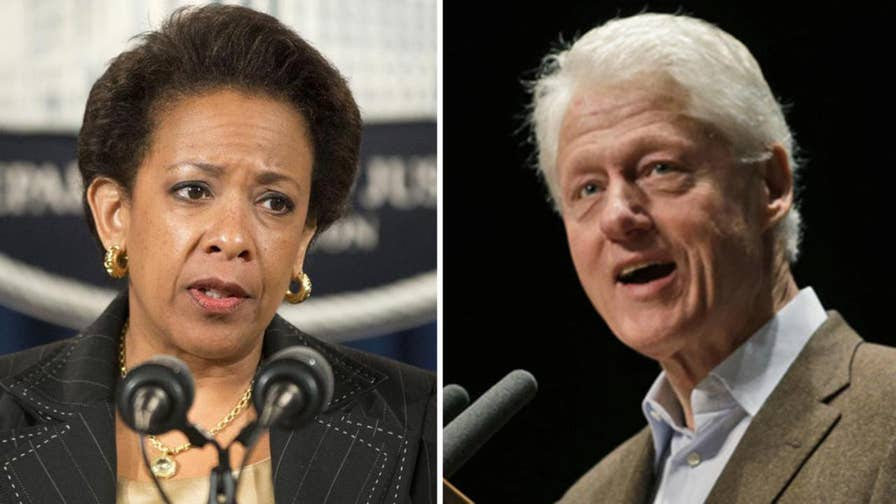 Hillary Clinton rejects the idea that a June 2016 meeting between her husband, former President Bill Clinton, and then-Attorney General Loretta Lynch critically damaged her White House bid.
“I just don’t buy that,” Clinton said in a PBS interview aired Friday evening to promote her new book, “What Happened,” about her loss last year to Donald Trump.
As Clinton has in several other, recent interviews promoting the book, she heaped much of the blame on then-FBI Director James Comey.
Comey led the Justice Department investigation into Clinton’s use of private email servers as secretary of state, after Lynch stepped back in the probe, as a result of her allowing Bill Clinton into her airplane to talk while on the tarmac of a Phoenix airport.
“My husband and Loretta Lynch said they didn’t say a word" about the probe, Clinton told PBS. “I honestly reject that premise, partly because there’s a chain of command in the Justice Department.”
Clinton points out that Lynch had a deputy attorney, Sally Yates, whom she called “a woman of experience and integrity.” And she seemed to suggest that Yates could have run the email probe. However, Clinton never really made clear in the interview why Yates didn’t take over the investigation.
She also argued that Comey, appointed by then-President Barack Obama, a fellow Democrat, was under “political pressure” from inside and outside of the FBI to make a case out of the criminal investigation into the matter of her emails and use of the private servers.
Comey in July 2016 said Clinton was “extremely careless” in handling classified and other emails on the servers but recommend no criminal charges -- a conclusion Lynch accepted.
However, Clinton argued in the PBS interview that Comey delivered an even bigger blow to her campaign in late-October 2016, days before voters went to the polls, when he effectively re-opened the case to review new information.
"OK, that was over on July 5. Right,” Clinton said.
“That, I thought, was a breach of professional ethics and responsibility and a rejection of the protocols within the Justice Department. It was over. And we were doing fine going forward. What really was costly, and what I believe was the proximate cause of my defeat, was his October 28 letter, which has never been adequately explained or defended, had nothing to do with what happened, you know, months before.”
Source>http://www.foxnews.com/politics/2017/09/17/clinton-rejects-premise-husband-meeting-ag-lynch-on-tarmac-critically-hurt-campaign.html
Posted by theodore miraldi at 5:41 PM