NoKo Reportedly to LAUNCH New Ballistic MISSILE Amid US Threats 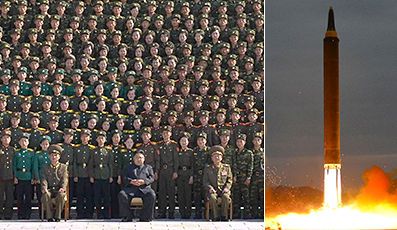 North Korea appears to be preparing to launch a ballistic missile-- possibly an ICBM, South Korean media reported Monday.
South Korea's Defense Ministry said North Korea appeared to be planning a future launch to show off its claimed ability to target the United States with nuclear weapons, though it was unclear when this might happen.
Chang Kyung-soo, an official with South Korea's Defense Ministry, told lawmakers that Seoul was seeing preparations in the North for an ICBM test but didn't provide details about how officials had reached that assessment.
Following U.S. warnings to North Korea of a "massive military response," South Korea on Monday fired missiles into the sea to simulate an attack on the North's main nuclear test site a day after Pyongyang detonated its largest ever nuclear test explosion.
The heated words from the United States and the military maneuvers in South Korea are becoming familiar responses to North Korea's rapid, as-yet unchecked pursuit of a viable arsenal of nuclear-tipped missiles that can strike the United States.
The most recent, and perhaps most dramatic, advancement came Sunday in an underground test of what leader Kim Jong Un's government claimed was a hydrogen bomb, the North's sixth nuclear test since 2006.
Chang also said the yield from the latest nuclear detonation appeared to be about 50 kilotons, which would mark a "significant increase" from North Korea's past nuclear tests.
In a series of tweets, President Trump threatened to halt all trade with countries doing business with the North, a veiled warning to China, and faulted South Korea for what he called "talk of appeasement."
South Korea's military said its live-fire exercise was meant to "strongly warn" Pyongyang. The drill involved F-15 fighter jets and the country's land-based "Hyunmoo" ballistic missiles firing into the Sea of Japan.
The target was set considering the distance to the North's test site and the exercise was aimed at practicing precision strikes and cutting off reinforcements, Seoul's Joint Chiefs of Staff said.
Each new North Korean missile and nuclear test gives Pyongyang's scientists invaluable information that allows big jumps in capability. North Korea is thought to have a growing arsenal of nuclear bombs and has spent decades trying to perfect a multistage, long-range missile to eventually carry smaller versions of those bombs.
Both diplomacy and severe sanctions have failed to check the North's decades-long march to nuclear mastery.
In Washington, Trump, asked by a reporter if he would attack the North, said: "We'll see." No U.S. military action appeared imminent, and the immediate focus appeared to be on ratcheting up economic penalties, which have had little effect thus far.
In briefs remarks after a White House meeting with Trump and other national security officials, Defense Secretary Jim Mattis told reporters that, “We are not looking to the total annihilation of a country, namely North Korea,” U.S. Defense Secretary Jim Mattis said after meeting Trump and his national security team. “But as I said, we have many options to do so.”
Mattis said the U.S. will answer any threat from the North with a "massive military response -- a response both effective and overwhelming."
Mattis also said the international community is unified in demanding the denuclearization of the Korean Peninsula and that Kim should know Washington's commitment to Japan and South Korea is unshakeable.
The Associated Press contributed to this report
Sourcehttp://www.foxnews.com/world/2017/09/04/north-korea-reportedly-appears-to-be-readying-for-new-launch.html
Posted by theodore miraldi at 10:09 AM