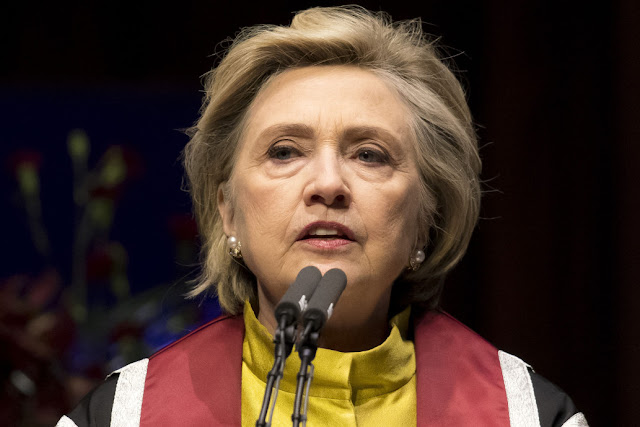 Hillary Clinton’s 2016 presidential campaign and the Democratic National Committee both broke the law by hiding payments to unearth dirt on Donald Trump, according to a complaint filed Wednesday with the Federal Election Commission.


Mark Elias, lawyer for the Clinton campaign, reportedly paid the Washington-based research firm Fusion GPS to continue compiling a “dossier” of then-Republican candidate — and failed to disclose the payments, the complaint says.
Campaign Legal Center, the nonprofit that filed the documents with the FEC, claims this is a direct violation of campaign finance law, which requires campaign and party committees to report all their spending.
“The DNC and Hillary for America reported dozens of payments totaling millions of dollars to the law firm Perkins Coie with the purpose described as ‘Legal Services’ or ‘Legal and Compliance Consulting,” when in reality, at least some of those payments were earmarked for the firm Fusion GPS, with the purpose of conducting opposition research on Donald Trump,” the complaint says.
“By failing to file accurate reports, the DNC and Hillary for America undermined the vital public information role that reporting is tended to serve.”
According to FEC records, the Clinton campaign and DNC reported a total of 382 payments to Perkins Coie throughout the election cycle.
While it’s legal to pay a company to do opposition research, it’s against the law to hide the true purpose.
“By filing misleading reports, the DNC and Clinton campaign undermined the vital public information role of campaign disclosures,” Adav Noti, senior director of trial litigation and strategy at CLC and former FEC official, explained in a statement.
“Voters need campaign disclosure laws to be enforced so they can hold candidates accountable for how they raise and spend money,” he said. “The FEC must investigate this apparent violation and take appropriate action.”
Federal officials are now tasked with deciding whether there was, in fact, a violation and what the punishment could be.
If found at fault, the CLC says those involved could face hefty fines.
“Questions about who paid for this dossier are the subject of intense public interest, and this is precisely the information that FEC reports are supposed to provide,” said Brendan Fischer, director of federal and FEC reform at CLC.
“Payments by a campaign or party committee to an opposition research firm are legal, as long as those payments are accurately disclosed. But describing payments for opposition research as ‘legal services’ is entirely misleading and subverts the reporting requirements.”
Source>http://nypost.com/2017/10/25/complaint-claims-clinton-dnc-broke-the-law-by-hiding-dossier-payments/
Posted by theodore miraldi at 8:03 PM