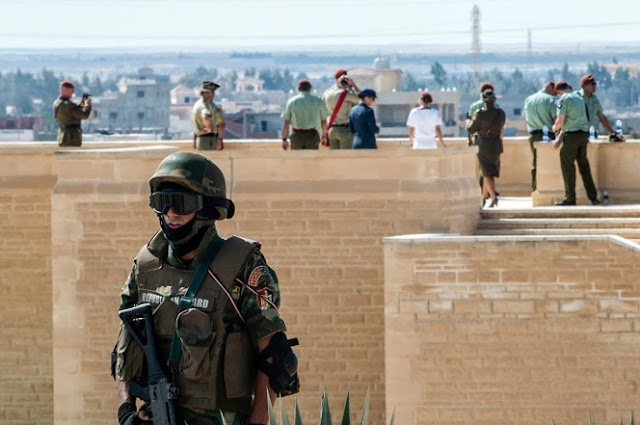 AP
CAIRO — At least 54 policemen, including 20 officers and 34 conscripts, were killed when a raid on a militant hideout outside of Cairo escalated into an all-out firefight, authorities said Saturday.
It was one of the largest losses of life for Egyptian security forces since militants began targeting government forces after the 2013 military ouster of Islamist President Mohammed Morsi, whose one-year rule proved divisive.
The officials said the exchange of fire began late Friday in the al-Wahat al-Bahriya area in Giza governorate, about 135 kilometers (84 miles) from the capital after security services moved in.
The officials say the death toll could increase. They spoke on condition of anonymity because they were not authorized to speak to the media.
Egypt’s Interior Ministry issued a statement on the raid late Friday but didn’t provide a death toll. The police also deployed aircraft to confront the militants late Friday, officials said.
The clashes continued after nightfall, Egypt’s state TV reported on its official website. State-run MENA news agency also reported the attack but provided a lower death toll, saying three policemen were killed.
No militant group immediately claimed involvement in the firefight.
Egypt has been struggling to contain an insurgency by Islamic militants led by an affiliate of the Islamic State group, centered mostly across the Suez Canal in the northern region of the Sinai Peninsula, but attacks on the mainland have also recently increased.
The country has been under a state of emergency since bombings and suicide attacks targeting minority Coptic Christians killed scores earlier this year. Those attacks were claimed by IS.
Egypt’s Grand Mufti Shawki Allam condemned the killing in a statement Friday.
Source>http://nypost.com/2017/10/21/egyptian-officials-say-55-police-killed-in-cairo-shootout/
Posted by theodore miraldi at 6:45 PM