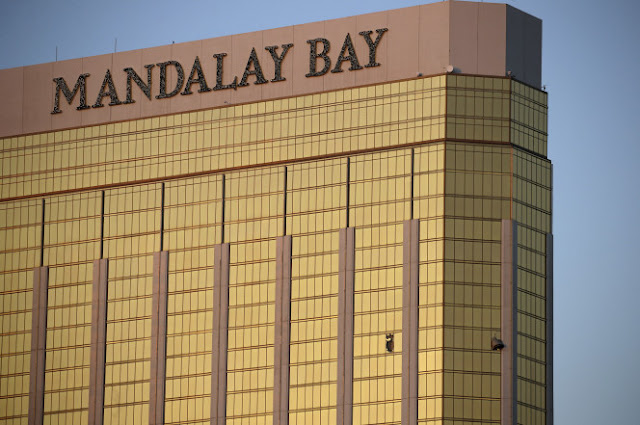 
Hotel staffers at the Mandalay Bay did not call Las Vegas police until after Stephen Paddock started his mass shooting spree, according to phone records.
An anonymous source who has reviewed the records told ABC’s “World News Tonight” that employees initially refused to alert authorities — even after security guard Jesus Campos took a bullet to the leg.
Campos reportedly alerted his superiors and informed them about Paddock after being shot by him, but strangely, nobody called the cops, the source said.
In addition, security staffers failed to notify police when Mandalay Bay maintenance engineer Stephen Schuck told them that he, too, was being fired at.
“Call the police, someone is firing a gun up here. Someone is firing a rifle on the 32nd floor down the hallway,” Schuck can be heard saying on audio tapes released Wednesday by the hotel.
The engineer reportedly radioed his employer, letting them know what happened and what room Paddock was in, after being asked by the hotel to do so. Yet, nobody did anything.
According to ABC’s source, hotel staff didn’t inform authorities about Paddock until after he began killing concertgoers at the Route 91 Harvest Festival.
Police officials said Monday that Campos was shot roughly six minutes before the 64-year-old retiree opened fire. It’s unclear how long after Paddock started shooting that security officials waited to call the police.
Many have questioned the timeline of the Las Vegas massacre in the days following the tragedy — including MGM resorts International, which owns the Mandalay Bay.
The second-guessing began this week after police officials revealed that they had been wrong about the times they originally reported. Instead of being shot before the massacre, cops initially said Campos was targeted about 10 minutes into it.
Clark County Sheriff Joe Lombardo defended the shifting information on Wednesday — and claimed that the details could even change again.
“Nobody’s trying to be nefarious, nobody’s trying to hide anything, and what we want to do is draw the most accurate picture we can,” he told reporters, insisting that the “response was as quick as possible.”
“I don’t think the response could have been any faster,” Lombardo said.
While he has praised the efforts of local officers, the top cop has yet to comment on the hotel’s response.
Officials did not comment Wednesday when asked about the Mandalay Bay security team and whether they relayed any information to police in the minutes before the mass shooting.
With Post Wires
Source>http://nypost.com/2017/10/11/mandalay-bay-staffers-didnt-call-cops-after-security-guard-was-shot/
Posted by theodore miraldi at 8:31 AM