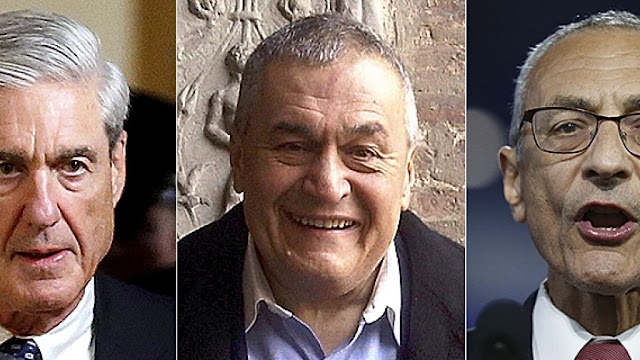 Tony Podesta, a powerful Democratic lobbyist and the brother of Hillary Clinton's campaign chairman, reportedly has entered Robert Mueller's investigative crosshairs as the special counsel's office probes whether his firm violated federal law.
NBC News first reported that Podesta and his Democratic lobbying firm are now subjects in the special counsel’s Russia investigation, after inquiries regarding former Trump campaign chairman Paul Manafort’s finances.
The Podesta Group was co-founded by Tony and his brother John Podesta, who is a longtime Clinton aide and served as chairman of her 2016 presidential campaign.
CLINTON CAMPAIGN GLOSSING OVER ITS OWN RUSSIA CONNECTIONS
According to Monday’s NBC News report, Manafort organized a PR campaign for a pro-Ukraine nonprofit called the European Centre for a Modern Ukraine (ECMU), which reportedly was backed by a pro-Russia party. The Podesta Group reportedly was one of many firms that worked on the campaign.
According to NBC News, Mueller's team began looking at Podesta and his company and is now pursuing a criminal inquiry into whether the company violated the Foreign Agents Registration Act (FARA).
Under FARA, people in the United States who lobby on behalf of foreign entities must register through the Justice Department as a foreign agent and disclose their work. Podesta's firm eventually filed a registration for the ECMU work, after the media reported on the business and Congress started asking questions.
But in a statement on Monday, a spokesperson for The Podesta Group claimed the company was in compliance -- citing a series of filings dating back years -- and is “fully” cooperating with the special counsel’s office.
“The Podesta Group fully disclosed its representation of the European Centre for a Modern Ukraine (ECFMU), and complied with FARA by filing under the lobbying disclosure act over five years ago and within weeks of starting our work,” the spokesperson said. “Any insinuation to the contrary is false. The Podesta Group has fully cooperated with the Special Counsel’s office and taken every possible step to provide documentation that confirms compliance with the law. Based on our due diligence and on the recommendation of definitive legal experts, the firm immediately filed the appropriate public disclosures of its representation of the ECFMU over five years ago, and in eight subsequent public filings.”
The spokesperson said the work for ECMU “was in support of Ukraine’s admission to the EU, a position supported by foreign policy experts at the time. The ECFMU provided formal certification that it was neither funded by nor directed by a government or political party.”
The special counsel’s office declined to comment on whether Mueller’s team is investigating Tony Podesta and his firm. John Podesta left the company years ago.
The development, though, would speak to how the Mueller probe may be expanding well beyond the original focus on Russian meddling in the 2016 election and potential collusion with Trump associates -- ensnaring Democratic figures in the process.
“It’s a cliché, but a good cliché – prosecutors go where the evidence leads them,” former high-ranking DOJ official James Trusty, now with Ifrah Law LLC, told Fox News on Monday. “When you define the mission broadly, there is a lot of room for [an independent prosecutor’s] exploration.”
Trusty said Mueller’s investigation was broad, leaving “a lot of room to legitimately poke around and find information, on one party or another.”
“If you define it very narrowly, it is much easier to say the special counsel is a rogue elephant, but if you define the mission broadly, it is all fair game to look into any violation of federal law and relationships with Russia,” Trusty told Fox News. “You’ll find there are prosecutions no one would have anticipated at the start, or corruption from a different party than were initially looked at.”
Trusty added: “All of this is fair game if the independent prosecutor is doing his job the right way.”
This wasn't the first problematic case for the company involving FARA. In November, the Podesta Group told the Justice Department that it failed to file legally required disclosures of White House advocacy on behalf of a foreign government -- in this case India, according to federal filings. The Washington Free Beacon first reported that the Podesta Group was in violation of FARA.
Source>http://www.foxnews.com/politics/2017/10/23/report-mueller-probe-expands-to-democratic-lobbyist-tony-podestas-russia-dealings.html
Posted by theodore miraldi at 2:56 PM