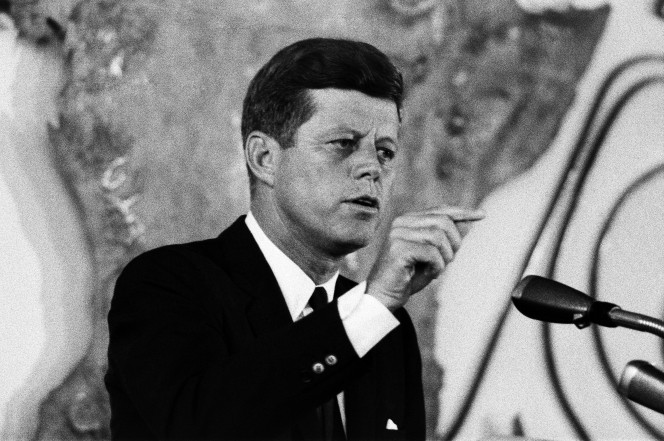 
President Trump said Saturday he will let the National Archives go ahead with the release of thousands of pages of secret government documents about the JFK assassination.
“Subject to the receipt of further information, I will be allowing, as President, the long blocked and classified JFK FILES to be opened,” Trump tweeted at 8:35 a.m.
Assassination experts say the secret records may reveal new details about what the CIA knew of assassin Lee Harvey Oswald’s trip to the Soviet and Cuban embassies in Mexico City weeks before he shot Kennedy in Dallas on Nov. 22, 1963.
The National Archives is required to release all of its JFK documents by Thursday, 25 years to the day after President George H.W. Bush signed the the JFK Assassination Records Act. Under the act, Trump can withhold part or all of the documents if he decides some “identifiable harm” weighs against disclosure.
Eighty-eight percent of the Archives’ 5 million pages of JFK material are already public. Another 11 percent are partly public, with sensitive portions removed. One percent of the records are completely secret.
Oswald visited the Mexico City embassies to apply for visas that would let him return to the Soviet Union, where he lived from 1959 to 1962. The CIA watched both embassies closely. But assassination experts are convinced the CIA and FBI haven’t disclosed all they knew about Oswald’s Mexico City trip.
The Warren Commission — appointed by President Lyndon Johnson — determined a year after the assassination that Oswald acted alone.
But alternate theories about the assassination abound. A 2013 Gallup poll found 61 percent of Americans believe Kennedy’s assassination was a conspiracy.
Source>http://nypost.com/2017/10/21/trump-says-hell-allow-release-of-secret-jfk-assassination-files/

Posted by theodore miraldi at 10:41 AM