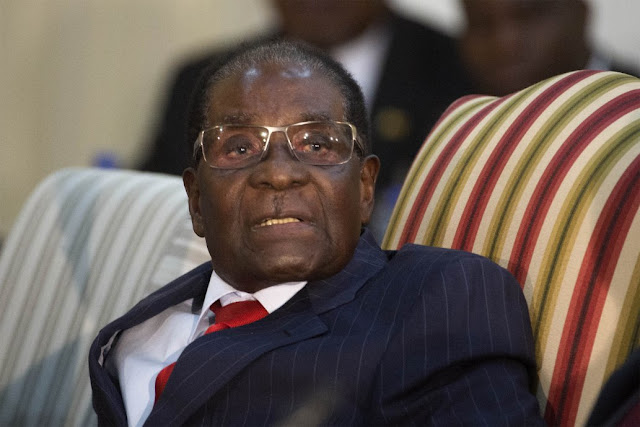 
Outrage erupted around the world Saturday as ruthless Zimbabwean dictator Robert Mugabe was honored by the United Nations.
Mugabe — a murderous tyrant feted in City Hall 15 years ago at a reception organized by former Council member Charles Barron and attended by future Mayor Bill de Blasio — was named a “goodwill ambassador” by the UN’s World Health Organization.
Ironically, Mugabe replaces former Mayor Michael Bloomberg, a billionaire well-known for his philanthropy, who was named a global ambassador in August 2016.
“This appointment clearly contradicts the United Nations ideals of respect for human rights and human dignity,” the U.S. State Department said.
Surprised by the widespread denunciations, WHO director general Tedros Ghebreyesus said on Twitter that he is “rethinking the approach in light of WHO values. I will issue a statement as soon as possible.”
Zimbabwe was once southern Africa’s breadbasket. But Mugabe, at age 93 the world’s oldest head of state, has run down its once-prosperous economy during his decades in power.
Zimbabwe’s economy has shrunk by more than a third during the past 20 years and its average life expectancy fell from 60 to 50 years in the 30 years since it became independent in 1980, according to the Washington Post.
“The government of Robert Mugabe presided over the dramatic reversal of its population’s access to food, clean water, basic sanitation and health care,” the Physicians for Human rights said in 2008.
Nonetheless New York City politicians — led by Barron — celebrated Mugabe at a City Hall reception in 2002.
Thirty-six of the 51 City Council members shunned the event, which included an hour-long lecture by the dictator. Among those attending was de Blasio, who at the time was serving his first term as a councilman. De Blasio later said he regretted being there.
Rep. Gregory Meeks (D-Queens) praised Mugabe as a “great man” during a congressional visit to Zimbabwe in 2010.
Two dozen organizations — including the World Heart Federation, Action Against Smoking and Cancer Research U.K. — released a statement Saturday slamming the WHO appointment, saying they were “shocked and deeply concerned” given Mugabe’s “long track record of human rights violations.”
The US imposed sanctions on Zimbabwe in 2003, citing his government’s rights abuses and evidence of electoral fraud.
With Post wires
Source>http://nypost.com/2017/10/21/world-health-organization-honors-ruthless-african-dictator/
Posted by theodore miraldi at 10:35 AM