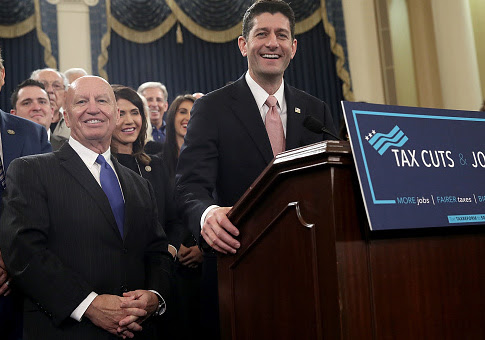 The Tax Cuts and Jobs Act, the new legislation introduced by the House last week, would create nearly one million new jobs and increase gross domestic product by 3.9 percent, according to an analysis from the nonpartisan Tax Foundation.
The bill cuts the corporate tax rate from 35 percent to 20 percent; reduces the number of individual tax brackets to five, which includes tax brackets of zero, 12, 25, 35 and 39.6 percent; and doubles the standard deduction. House Republicans said on Thursday that the bill would give a middle-income family of four that earns $59,000 a tax cut of about $1,182 under the proposal.
"The pro-growth tax plan would simplify the tax code by eliminating most itemized deductions, while reducing marginal tax rates," the Tax Foundation states.
The foundation estimates the tax reform proposal would lead to 975,000 new full-time jobs created in the long run. It would also boost gross domestic product by 3.9 percent, and after-tax incomes for Americans would grow by 4.4 percent in the long run. In 10 years, the Tax Foundation estimates the average after-tax income for a middle-income family will grow by $2,598.
"The increase in family incomes is the result of both the income tax cuts and the broader rise in productivity and wages due to economic growth," the analysis explains. "These estimates take into account all aspects of the Tax Cuts and Jobs Act, including changes to the individual and corporate tax codes."
"As the Tax Foundation analysis shows, the corporate tax changes are driving the economic stimulus," said Wayne Winegarden, tax reform expert at the Pacific Research Institute. "On the individual side, it appears that political considerations dominated economic fundamentals."
"It would have been a much stronger proposal had the plan replaced all income and payroll taxes with a simple flat tax," Winegarden said. "The inclusion of payroll taxes, which are regressive taxes paid mostly by workers, would have gone a long way in addressing the concerns that lower-income workers benefit as well."
The Tax Foundation analysis reflects similar findings to a study produced by the Council of Economic Advisers released last month. The study analyzed the effects of reducing the corporate tax rate from 35 to 20 percent and found this could lead to higher wages and increasing GDP growth.
In the long run, reducing the corporate tax rate could lift GDP to a range of 3 to 5 percent.
"We can be highly confident that the level of GDP will be 5 percent higher 10 years from now," said CEA chairman Kevin Hassett. "We would ramp up to that with steady growth of about 0.5 percent per year higher just from the corporate tax side. So obviously the president's plan is already having a positive effect on economic growth."
In addition, the study found that Americans' wage and salary incomes could increase by roughly $4,000.
"We find a very strong agreement across the different classes of models that the average American household yearly earning will conservatively go up by about $4,000 if the corporate side of this proposal becomes law," Hassett explained. "Once it hits that $4,000 it will continue to provide yearly increases from there and wages and incomes would grow."
Source>http://freebeacon.com/issues/analysis-house-tax-plan-create-nearly-1-million-new-jobs-increase-gdp-3-9/
Posted by theodore miraldi at 7:25 PM