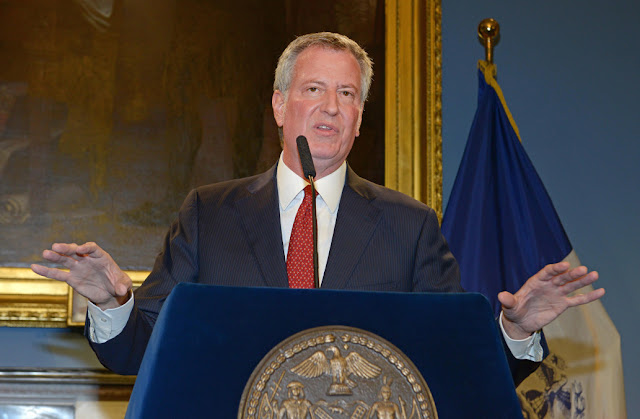 No wonder Mayor de Blasio has so passionately defended Housing Authority boss Shola Olatoye for all those years of lying about performing legally mandated lead-paint inspections: He was in on the coverup.

The mayor’s office now admits that de Blasio knew as early as April 2016 that NYCHA was violating both local and federal regulations — but never told the public or the agency’s 400,000 tenants.
Nor did he correct his proud-but-false boasts of a few weeks earlier that “we have a very aggressive inspection and abatement program” that had been carried out “for years.”
You can see why de Blasio, as The Post reported Monday, wants to oust Investigations Commissioner Mark Peters, without whom the whole mess would still be secret.
As news of the mayoral deception broke, a somewhat chastened de Blasio admitted that “in retrospect I wish we had” disclosed NYCHA’s deception.
That’s a far cry from last week, when he defiantly vowed that Olatoye “isn’t going anywhere” and called demands for her removal “a cheap political stunt.”
But this goes beyond the performance of one commissioner, even as she tried to bolster her position by quickly dumping two senior staffers, demoting another and announcing a new in-house compliance division.
It’s about de Blasio: He hired Olatoye and set the same “don’t rock the boat” policies for NYCHA as he did for so much of city government — and even helped conceal NYCHA’s continuing violations.

Yes, as the mayor stresses, the violations began before he took office — but that’ s still no excuse for Team de Blasio’s lies.
This goes beyond lead paint, too: As Peters noted Sunday, this is the fourth time since 2015 that the Department of Investigation has found NYCHA failing to monitor its residents’ safety. Which is why he blasted the agency’s “systemic mismanagement.”
That echoes past reports on mass bungling at other de Blasio agencies, such as the Administration for Children’s Services, before public outrage forced the mayor to make changes.
Plainly, this mayor doesn’t care whether commissioners are actually doing their jobs — as Peters is, and Olatoye isn’t — but only whether they’re embarrassing him.
SOURCE>https://nypost.com/2017/11/20/what-really-upsets-de-blasio-about-the-nycha-scandals/
Posted by theodore miraldi at 8:14 AM