The nerve of Hillary to interject her; How to lose a nation policy in Beiijing. She represents nothing but failure and not American Leadership...tmiraldi 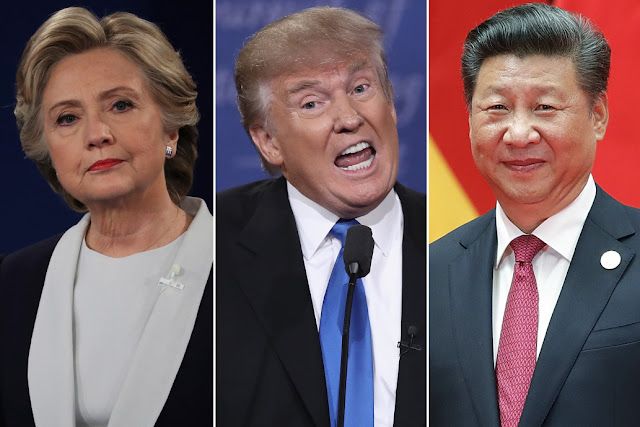 
Hillary Clinton used a conference in Beijing to blast both President Trump and the Chinese over their stance toward North Korea — saying it needs to soften up soon before things get out of hand and nuclear war breaks out.
Serving as the keynote speaker at Caijing Magazine’s three-day annual conference on Tuesday, the former secretary of state called on Trump and Chinese leader Xi Jinping to avoid “bluster” and “personal taunts” when dealing with Pyongyang, according to Bloomberg.
She reportedly criticized the Trump administration for retreating from diplomacy in recent months and said she hoped that China wouldn’t follow suit.
While Clinton focused much of her sentiment on the US stance toward North Korea, she took most of her jabs at the Chinese — claiming they, too, were taking the wrong approach to the situation and making things worse with their “secret” military buildups.
“Beijing should remember that inaction is a choice as well,” Clinton said.
Like the Trump administration, the Chinese have chosen to avoid diplomatic talks with the North Koreans as tensions continue to escalate in the region.
Clinton said Tuesday that she hopes the six-party talks — multilateral negotiations held between China, Japan, North Korea, Russia, South Korea and the US on denuclearization — will be brought back after being shelved in 2009.
The Chinese have called for a resumption of the process in the past, to no avail.
SOURCE>https://nypost.com/2017/11/27/hillary-trump-china-should-soften-up-on-north-korea/
Posted by theodore miraldi at 7:45 AM