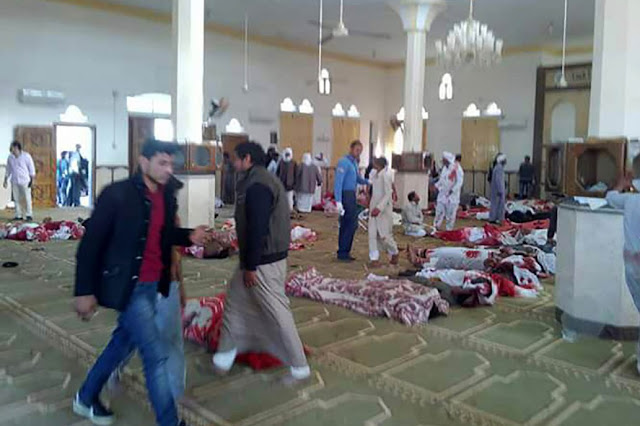 
Militants attacked a packed mosque in Egypt’s northern Sinai on Friday, killing at least 235 people by setting off a bomb and spraying fleeing worshipers with gunfire, according to reports.
The bomb blast ripped through the Rawda mosque in Bir al-Abed, about 25 miles west of the northern Sinai capital of El-Arish, before the gunmen opened fire, officials said.
Witnesses said the assailants had surrounded the mosque with all-terrain vehicles and planted a bomb outside, and then mowed down the terrified worshipers as they tried to flee.
According to state television, at least 235 people were killed and 125 wounded in the attack, which is unprecedented in a four-year insurgency by Islamist extremist groups, Reuters reported.
“They were shooting at people as they left the mosque,” said a local resident whose relatives were at the scene. “They were shooting at the ambulances too.”
Egypt’s state news agency reported the casualty toll, citing “official sources,” revising it upward several times following initial reports.
No group claimed immediate responsibility, but since 2014, Egyptian security forces have battled a stubborn ISIS affiliate in the north of Sinai, where militants have killed hundreds of police and soldiers.
It also is believed to have been behind the 2016 downing of a Russian airliner that killed 226.
The Arabiya news outlet and other local sources said some of the worshipers were Sufis, whom hardliners such as ISIS view as apostates because they revere saints and shrines, which for Islamists is tantamount to idolatry.
ISIS has targeted Sufis several times in the area in the past, notably beheading a leading Sufi religious figure, the blind sheikh Suleiman Abu Heraz, last year and posting photos of the killing online.
A tribal leader and head of a Bedouin militia that fights ISIS told Agence France-Presse the mosque is known as a gathering spot for Sufis.
The bloodbath was the first major militant attack on a Muslim mosque, and the slaughter eclipsed any past attacks of its kind, dating back to a previous militant insurgency in the 1990s.
The attackers opened fire from four vehicles and blocked off escape routes from the area by blowing up cars and leaving the burning wrecks blocking the roads, three police officers on the scene said.
Resident Ashraf el-Hefny said many of the victims were workers at a nearby salt firm who had come for Friday services at the mosque, which had contained some 300 people.
“Local people brought the wounded to hospital on their own cars and trucks,” he said.
President Abdel Fattah al-Sisi convened an emergency meeting with his defense and interior ministers and intelligence chief soon after the attack. The government also declared three days of mourning.
Ahmed Abul Gheit, head of the Cairo-based Arab League, condemned the “terrifying crime which again shows that Islam is innocent of those who follow extremist terrorist ideology,” his spokesman said in a statement.
Militants have mostly targeted security forces in their attacks since bloodshed in the Sinai worsened after 2013 when Sisi, then an armed forces commander, led the overthrow of President Mohamed Morsi of the Muslim Brotherhood.
President Trump quickly condemned the attack.
“Horrible and cowardly terrorist attack on innocent and defenseless worshipers in Egypt. The world cannot tolerate terrorism, we must defeat them militarily and discredit the extremist ideology that forms the basis of their existence!” he tweeted.
With Post wires
SOURCE>https://nypost.com/2017/11/24/militants-attack-mosque-in-egypt-leaving-dozens-of-casualties/
Posted by theodore miraldi at 12:42 PM