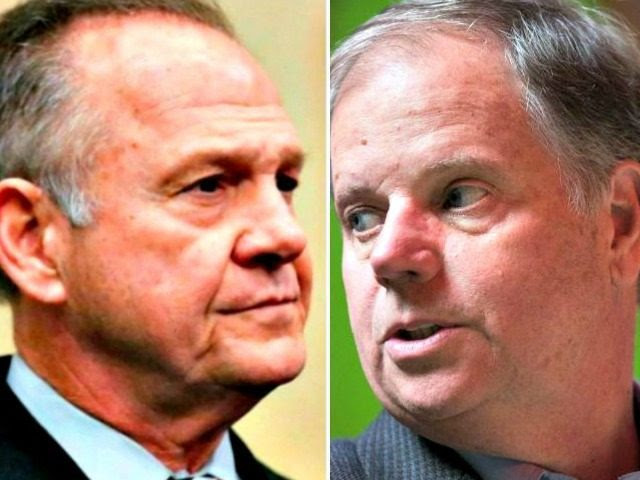 Alabama Republican Senate candidate Roy Moore has opened up a solid lead over Democrat opponent Doug Jones, according to a new poll — suggesting that allegations of sexual impropriety have not fatally damaged Moore’s candidacy.

Alabama Today reported on the poll from Sky Research showing Moore with 46.7 percent compared to Jones’ 39.6 percent, with 13.7 percent undecided. The poll was conducted on Nov. 21 and had a margin of error of 3.1 percent.
That poll comes just days after another poll, by Atlantic Media and Research, showedMoore up by six points. The Sky Research poll could still be swung Jones’ way by undecided voters, but that would appear unlikely.
Moore has been dogged by allegations of sexual impropriety after he was accused of sexual misconduct with a 14-year-old when he was in his 30s. Since then a number of women have come forward and said he pursued them when they were teenagers.
But Moore’s fortunes have changed recently. A widely spread claim that he was bannedfrom a local mall for preying on teenagers was debunked by the former mall manager, casting doubt on some of the mainstream media reporting on the allegations.
Moore also got a boost by an endorsement this week from President Trump:
“He totally denies it. He says it didn’t happen,” Trump said. “Forty years is a long time. He’s run eight races, and this has never come up.”
Another good sign for Moore is that 62.3 percent of the respondents identified as Republican, suggesting that Jones has an uphill climb to get Alabamians to vote for him.
Trump also reminded the deep-red state that it may not want a “liberal Democrat” representing them in the Senate.