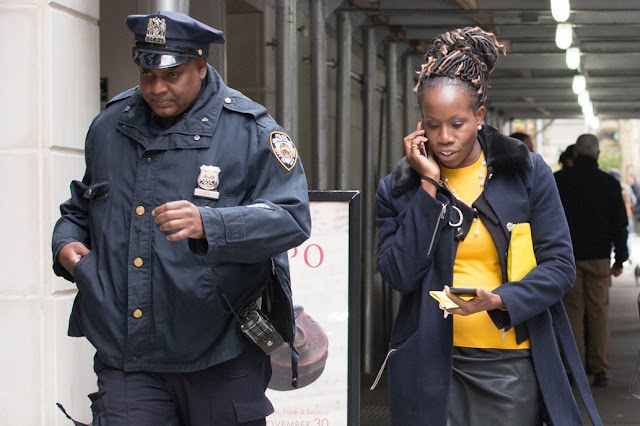 
The city’s embattled Housing Authority chief showed up late for work Wednesday morning ​shielded by an NYPD ​officer — and refused to address ​serious ​allegations ​from investigators that ​she lied about conducting lead-paint inspections in thousands of low-income apartments.

The uniformed cop followed NYCHA Chairwoman Shola Olatoye into the office building at 250 Broadway, across from City Hall, around 10:30 a.m., and appeared to be serving as her bodyguard.​​
He used his torso to try to block The Post from snapping a photo in the lobby, then accompanied Olatoye as she walked to a nearby Italian eatery about 90 minutes later.
Olatoye was spotted chatting on her cellphone inside the Gran Morsi restaurant on Warren Street, while the cop paced back and forth on the sidewalk outside.
An NYPD spokesman declined to say why it was providing Olatoye with that level of protection​ on the taxpayer’s dime​.
Earlier, Olatoye ignored questions from The Post about Tuesday’s damning report from the city Department of Investigation, which revealed that she admittedly filed false paperwork with the feds last year.
Olaytoye instead smiled and said an NYCHA spokeswoman would be “happy to provide any statement that we’ve provided in the past, as well as answering further questions that you might have.”
“That’s the appropriate way to talk about this matter,” she added.
According to ​the ​DOI report, Olatoye — appointed by Mayor Bill de Blasio on 2014 — falsely told the federal Department of Housing and Urban Development that annual lead-paint inspections had been performed in 55,000 NYCHA apartments.
Legal experts have told The Post that Olatoye could be charged with making a false statement to the government, with former federal Justice Department prosecutor Peter Katz saying she “made almost a full confession.”
Councilman Rory Lancman (D-Queens) called the allegations against Olatoye “appalling,” saying that New Yorkers “need to have confidence that NYCHA is capable of performing the most basic of public safety functions.”
“Heads need to roll,” he said. “Somebody at NYCHA at the highest level is not performing the most basic function.”
Additional reporting by Shawn Cohen
Source>https://nypost.com/2017/11/15/nycha-boss-hides-behind-nypd-bodyguard-after-explosive-report/

Posted by theodore miraldi at 6:34 PM