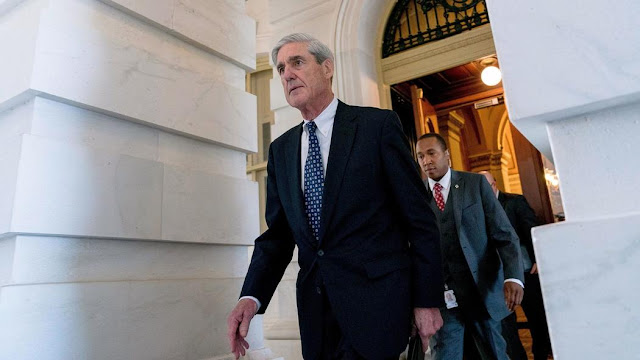 President George W. Bush waves on July 5, 2001 after announcing Robert Mueller as his choice for FBI director. On the right stands then-Atty. Gen. John Ashcroft. (Emilie Sommer / AFP)
Mueller countered by announcing plans to reshape the FBI. Its first priority would be to prevent another terrorist attack — not conventional law enforcement.
The vastness of the FBI’s challenge emerged within weeks.
A handful of letters laced with powdered anthrax killed five people and sickened 17 others. The government closed congressional office buildings, the Supreme Court and postal facilities as the country braced for further biological terrorism.
But Mueller’s FBI struggled for nearly seven years to determine who was responsible — even as he personally managed the case.
“The director was always the leader of the anthrax investigation, period,” said Michael Mason, former head of the FBI’s Washington field office.
The FBI focused on Steven J. Hatfill, a virologist at the Army’s laboratories at Ft. Detrick, Md. In January 2003, Mueller assured congressional leaders in a closed-door briefing that bloodhounds had traced anthrax from the attacks to Hatfill.
But Hatfill had no experience handling anthrax. Nor did he have access to anthrax stored at Ft. Detrick or elsewhere. Years later, the FBI would reject the bloodhound evidence as unreliable.
After media leaks fingered Hatfill, he sued the FBI and the Justice Department on privacy grounds. In June 2008, the government agreed to pay Hatfill about $5.8 million.
Two months later, on Aug. 6, Mueller summoned senior investigators and prosecutors on the anthrax case to his seventh-floor office. The FBI would hold a news conference that afternoon, and he wanted to recap the case’s stunning denouement.
Bruce E. Ivins, an Army microbiologist at Ft. Detrick who specialized in handling anthrax, had committed suicide after his lawyers informed him he was about to be charged with murder for the letter attacks.
Evidence showed Ivins had created and held custody of a batch of anthrax traced by DNA to each of the killings. He had spent hours alone in specially equipped labs just before each batch of letters was mailed.
Mueller let others hold the news conference. Some aides who met Mueller that day think he was reluctant to publicly address the missteps with Hatfill, the bloodhounds and the long delay in focusing on Ivins.
“I think he was personally embarrassed,” said one. “I would assess him as someone that can’t accept the fact that he screwed up.”
::
At FBI headquarters, protecting the director from embarrassment was ingrained.
A case in point unfolded in 2011 — just as the Senate was considering President Obama’s request to extend Mueller’s expiring term as FBI director by two years.
The FBI’s Inspection Division, a unit that scrutinizes bureau operations, conducted a three-week examination of the Directorate of Intelligence, a unit that Mueller had created to carry out the shift in preventing terrorism.
“They inspected it and they wrote the inspection report, and it said the whole thing’s broken — set it on fire and start from scratch,” said a former official familiar with the report. Another ex-official confirmed the account.
Mueller’s top aides saw peril in following normal procedure — forwarding the report to the Justice Department’s inspector general for possible follow-up action.
“It was, ‘The director will get skewered. We’ve got to protect him, and we can’t issue this,’” the former official recalled.
The aides kept the report in-house, the former official said, by tweaking its language.
“Anywhere it said ‘inspection,’ they changed it to ‘review.’ And said this was a review, not an inspection, and therefore they didn’t have to issue it to … the inspector general.”
Two years later, Mueller — without citing the inspection — informed Congress that he had restructured the Directorate of Intelligence “to maximize organizational collaboration, identify and address emerging threats and more effectively integrate intelligence and operations within the FBI.”
Trump’s name or brand is not going to back down Mueller.— A former FBI colleague of Robert Mueller
During his final months as FBI director, Mueller was again enlisted to help with a thorny matter in U.S.-Russia relations.
In the summer of 2013, the White House asked Mueller to negotiate the release from Russia of Edward Snowden, the former National Security Agency contractor who stole volumes of classified material on U.S. surveillance operations at home and abroad. Snowden had fled to Moscow after leaking the data to journalists.
Unlike the Cold War spy cases, the U.S. did not offer a trade. The Obama administration wanted Moscow to return Snowden as part of a diplomatic “reset,” an ultimately unsuccessful effort to improve relations with Russia.
Lisa Monaco, the White House’s Homeland Security advisor, tasked Mueller to talk to Alexander Bortnikov, head of Russia’s internal security and counter-intelligence service, the FSB.
For at least a week, Mueller called Bortnikov’s office, starting at 3 a.m. in Washington. Each time, the FBI director was turned aside without getting Bortnikov on the line.
“Mueller just kept calling over there, like begging to talk to the guy,” said a former official. Instead, Snowden was granted asylum in Russia.
The unsuccessful outreach offered Mueller insight into Russian intelligence, which U.S. officials say helped hack and leak Democratic Party emails last year in an effort to undermine U.S. democracy and to help Trump’s campaign.
Investigators and lawyers who have worked with Mueller say that his legacy as special counsel will depend, ultimately, on his resolve, his integrity and especially his judgment.
“If he believes somebody has committed a crime, he’s going to do whatever he can to hold them accountable,” said a former FBI colleague. “Trump’s name or brand is not going to back down Mueller.”
SOURCE>http://www.latimes.com/politics/la-na-pol-mueller-record-20171122-story.html

Posted by theodore miraldi at 8:38 AM