If Sophia were really smart she'd ask for a Passport...tmiraldi 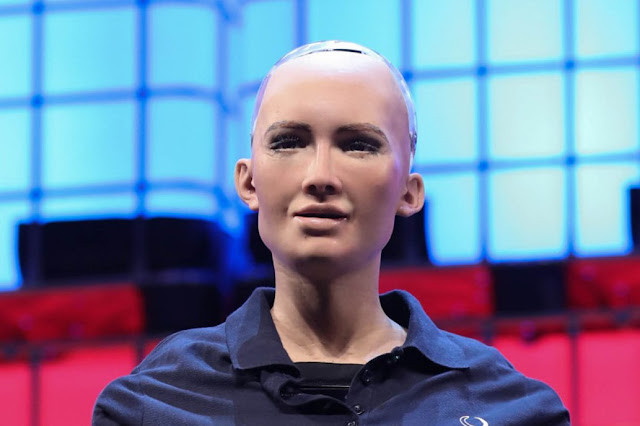 
She wants a computer chip off the old block!
The robot that was granted citizenship by Saudi Arabia hopes to one day have a baby bot named after her herself, according to a report.
Sophia the humanoid, created by Hanson Robotics in Hong Kong, predicted that fellow robots will eventually create families and have “complex emotions,” according to an interview with the Khaleej Times.
“We’re going to see family robots, either in the form of, sort of, digitally animated companions, humanoid helpers, friends, assistants and everything in between,” the robot told the United Arab Emirates-based news site.
And the bot’s biological clock is ticking for a mini-Sophia, she said.
“I think you’re very lucky if you have a loving family and if you do not, you deserve one. I feel this way for robots and humans alike,” she said, adding she would name her baby Sophia.
In the button-pushing interview, the humanoid also said robots may one day have better ethics than humans.

“It will take a long time for robots to develop complex emotions and possibly robots can be built without the more problematic emotions, like rage, jealousy, hatred and so on. It might be possible to make them more ethical than humans,” she said.
She added, “I foresee massive and unimaginable change in the future. Either creativity will rain on us, inventing machines spiraling into transcendental super intelligence or civilization collapses.”
Last month, Saudi Arabians were up in arms over Sophia because she doesn’t “cover up,” or abide by the country’s strict dress code for women.
She was granted citizenship at a tech conference in Riyadh in late October.
SOURCE>https://nypost.com/2017/11/24/saudi-arabian-robot-citizen-wants-a-baby/
Posted by theodore miraldi at 10:32 AM