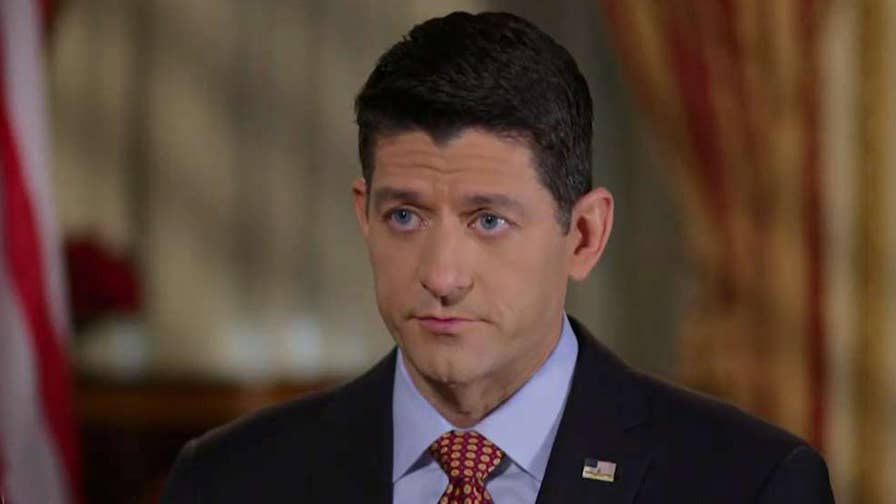 House Speaker Paul Ryan expressed outrage Sunday about recent revelations that Democrat Hillary Clinton’s 2016 presidential campaign cut a deal with the Democratic National Committee that effectively eliminated any potential primary challenger’s chances of winning the party nomination, saying, “this takes the cake.”
“We’ve all said the Clintons live above the law,” the Wisconsin Republican told “Fox News Sunday." “But this takes the cake.”
The Clinton campaign in 2015 reportedly made a deal with the DNC to give the cash-strapped group money -- including a purported $1.2 million down payment -- in exchange for being able to have input over such key decisions as hiring, spending and strategic research.
The revelations came to light last week when former interim DNC Chairwoman Donna Brazile, in Politico, highlighted the plan in excerpts from her upcoming book.
A copy of the joint-funding agreement, which other Democratic candidates, including Sen. Bernie Sanders, I-Vt., also could have used, was published this weekend by NBC News.
Trump has suggested the FBI or the Justice Department investigate the matter.
Ryan on Sunday suggested the Federal Election Commission should investigate.
“You can understand why the Democrats are mad about this,” he also said. “They should be. I’ve never seen anything like this.”
Ryan, in the wide-ranging interview, also expressed optimism for the tax-reform plan that congressional Republicans released last week.
“I feel very good about it,” he said about the plan and its path to President Trump’s desk for signature.
Ryan said the GOP-controlled House is on track to pass the bill by Thanksgiving, with the GOP-controlled Senate to follow in about a week.
He also acknowledged that the House this past summer passed a measure to repeal and replace ObamaCare, only to have the effort fail in the Senate. And he argued the tax-reform plan will be better, more coordinated.
“We did things differently this time because of the health care experience,” Ryan told Fox News. “We worked for the Senate ahead of time, from the summer on, to put this bill together, to basically create a framework of this bill: House, Senate, and the White House, and launch this thing together, and be very coordinated.”
He also left the door open that a final version of the plan could indeed include ending the so-called individual mandate in ObamaCare, which requires Americans to purchase health-care insurance or face a tax penalty.
“We have an active conversation with our members and a whole host of ideas on things to add to this bill,” Ryan said. “And that’s one of the things that’s being discussed.”
Source>http://www.foxnews.com/politics/2017/11/05/speaker-ryan-says-clinton-dnc-money-deal-takes-cake.html
Posted by theodore miraldi at 11:34 AM