STATE: 30K VISAS Issued to People From Terror-Sponsoring Countries Since 2007 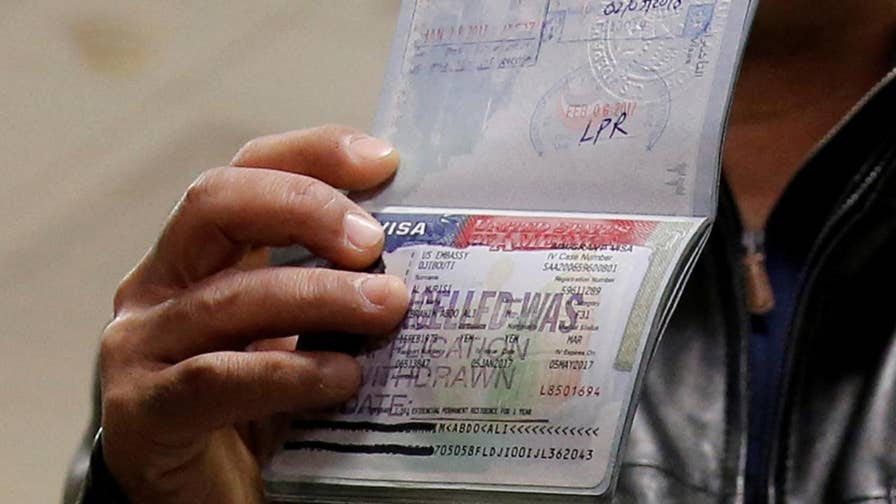 The United States issued nearly 30,000 visas to people from nations officially designated as sponsors of terrorism over the last decade through the Diversity Visa "lottery" program, the White House said Monday.
According to State Department statistics, since 2007, the U.S. has admitted 20,739 individuals from Iran; 7,232 from Sudan, and 812 from Syria through the Visa Lottery program –Iran, Sudan and Syria are currently the only countries designated by the State Department as “state sponsors of terrorism.”
The program offers a lottery for up to 50,000 immigrant visas annually, “drawn from random selection among all entries to individuals who are from countries with low rates of immigration” to the U.S., according to U.S. Citizen and Immigration Services.
That random selection, according to the State Department, is through a computer-generated drawing for foreign nationals to apply for permanent residence, or a green card, in the U.S. each year.
The program originated as part of a bill introduced in 1990 by Senate Minority Leader Chuck Schumer, D-N.Y., then a member of the House. Schumer’s measure to make a set number of visas available to “diversity immigrants” from certain countries was absorbed into a larger House immigration bill, which was sponsored by Schumer and 31 others, including several Republicans.
That bill was ultimately passed in a bipartisan vote, and was signed by President George H.W. Bush.
But despite the bipartisan passage of the program, President Trump has called for its elimination, and the termination of chain migration, which happens when immigrants can enter the country, simply to be united with a relative already living in the U.S.
Trump’s latest calls for these programs to end stemmed from the revelations that the ISIS-sympathizer, Sayfullo Saipov, who allegedly carried out the Halloween terror attack in New York City that killed eight and injured 11, entered the U.S. through the lottery system in 2010 from Uzbekistan.
“I am calling on Congress to TERMINATE the diversity visa lottery program that presents significant vulnerabilities to our national security,” Trump tweeted earlier this month following the attack. “Congress must end chain migration so that we can have a system that is SECURITY BASED! We need to make AMERICA SAFE! #USA.”
According to the State Department, in 2004, the agency’s deputy inspector general warned that the program contained “significant threats to national security as hostile intelligence officers, criminals, and terrorists attempt to use it” to enter the U.S.
More than a decade later, Attorney General Jeff Sessions is making the same warning.
REPUBLICAN LAWMAKERS BACK TRUMP'S CALL FOR TIGHTENING IMMIGRATION LAW IN WAKE OF ATTACK
“A merit-based system, by definition, would be safer than a lottery or even extended family-based immigration,” Sessions said in a speech in New York City earlier this month, saying “we don’t use random chance in college admissions and we don’t roll a die to hire people,” and called for a “rational” system.
Even Congressional Republicans, including those who are not typically in lockstep with the president, have rallied around his call for “extreme vetting” and the repeal, or reform of the program in the wake of the New York City terror attack.
Sen. Lindsey Graham, R-S.C., said the attack underscored the need for “merit-based immigration,” and said “it makes no sense” to hand out visas and green cards in a random way.
Other Republican lawmakers also called for policy reforms, including Sen. John McCain, R-Ariz., who said the program should be scrapped and replaced with a merit-based immigration system, in a rare moment of agreement between Trump and the senator.
And Sens. David Perdue, R-Ga., and Tom Cotton, R-Ark., proposed eliminating the Diversity Visa Lottery Program as part of the RAISE Act.
“While Senate Democrats originally created the Diversity Visa Lottery in 1990, many have supported legislation that would have eliminated it in the years since,” Perdue said in a statement. “I hope we can include this area of common ground as we work to fix our broken immigration system and strengthen our national security.”
The Trump White House came out in support of the bill, calling the DV program “outdated,” adding that it “serves questionable economic and humanitarian interests.”