The Research PROVES The No. 1 Social Justice Imperative Is MARRIAGE

For the last 20 years, marital status has increasingly become the central factor in whether our neighbors rise above, remain, or descend into poverty. The research is astounding. 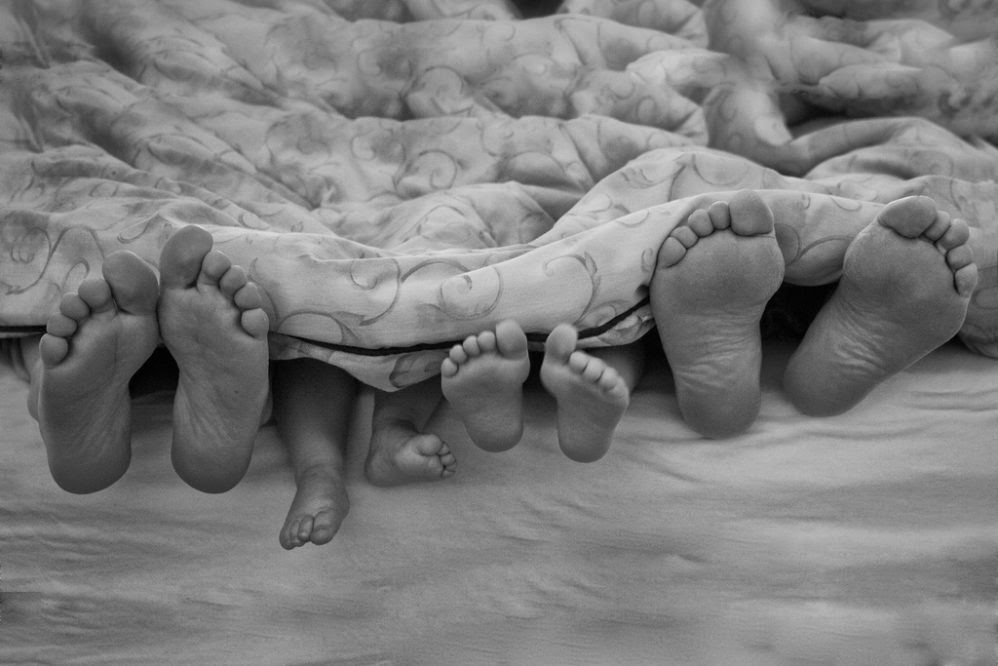 
A foundational value in our nation is the opportunity for all its citizens to be able to compete for a fair and meaningful shot at the American dream. This begins with access to citizenship, educational opportunity, and securing meaningful work that leads to greater life opportunities via commitment, diligence, and self-sacrifice. But an important contributor to putting and keeping men, women, and children on the escalator toward the American dream is little-known and widely ignored.
Just 70 years ago, social mobility and protection from poverty were largely a factor of employment. Those who had full-time work of any kind were seldom poor. Fifty years ago, education marked the gulf separating the haves from the have-nots. For the last 20 years or more, though, marital status has increasingly become the central factor in whether our neighbors and their children rise above, remain, or descend into poverty. The research is astounding.
Charles Murray of the American Enterprise Institute explains in his important book “Coming Apart: The State of White America” that in 1960, the poorly and moderately educated were only 10 percent less likely to be married than the college educated, with both numbers quite high: 84 and 94 respectively. That parity largely held until the late 1970s.
Today, these two groups are separated by a 35 percent margin and the gap continues to expand. All the movement is on one side. Marriage is sinking dramatically among lower- and middle-class Americans, down to a minority of 48 percent today. No indicators hint at any slowing. It’s remained generally constant among the well-to-do. This stark trend line led Murray to lament, “Marriage has become the fault line dividing America’s classes.” He has company in this conclusion.

Jonathan Rauch writing in the National Journal, certainly no conservative, notes that “marriage is displacing both income and race as the great class divide of the new century.” Isabel Sawhill, a senior scholar at the center-left Brookings Institute, boldly and correctly proclaimed some years ago that “the proliferation of single-parent households accounts for virtually all of the increase in child poverty since the early 1970s.” Virtually all of the increase!
Professor Bill Galston, President Clinton’s domestic policy advisor and now a senior fellow at Brookings, explained in the early 1990s that an American need only do three things to avoid living in poverty: graduate from high school, marry before having a child, and have that child after age twenty. Only 8 percent of people who do so, he reported, will be poor, while 79 percent who fail to do all three will.
Sociologists have referred to keeping these things in proper order as the “success sequence.” It remains true, according to a new research investigation from the Brookings and the American Enterprise institutes. It takes a deeper look at this “first comes love, then comes marriage” sequence by class and generation.
The increase of baby carriages coming before marriage is terribly alarming among the working poor. Working-class women are nearly three times more likely to have babies out of wedlock than upper-class women. Poor women are about five times more likely. These two groups are far less likely to be married overall and twice as likely to be cohabiting, suffering further from inherent instability of living together without marriage. 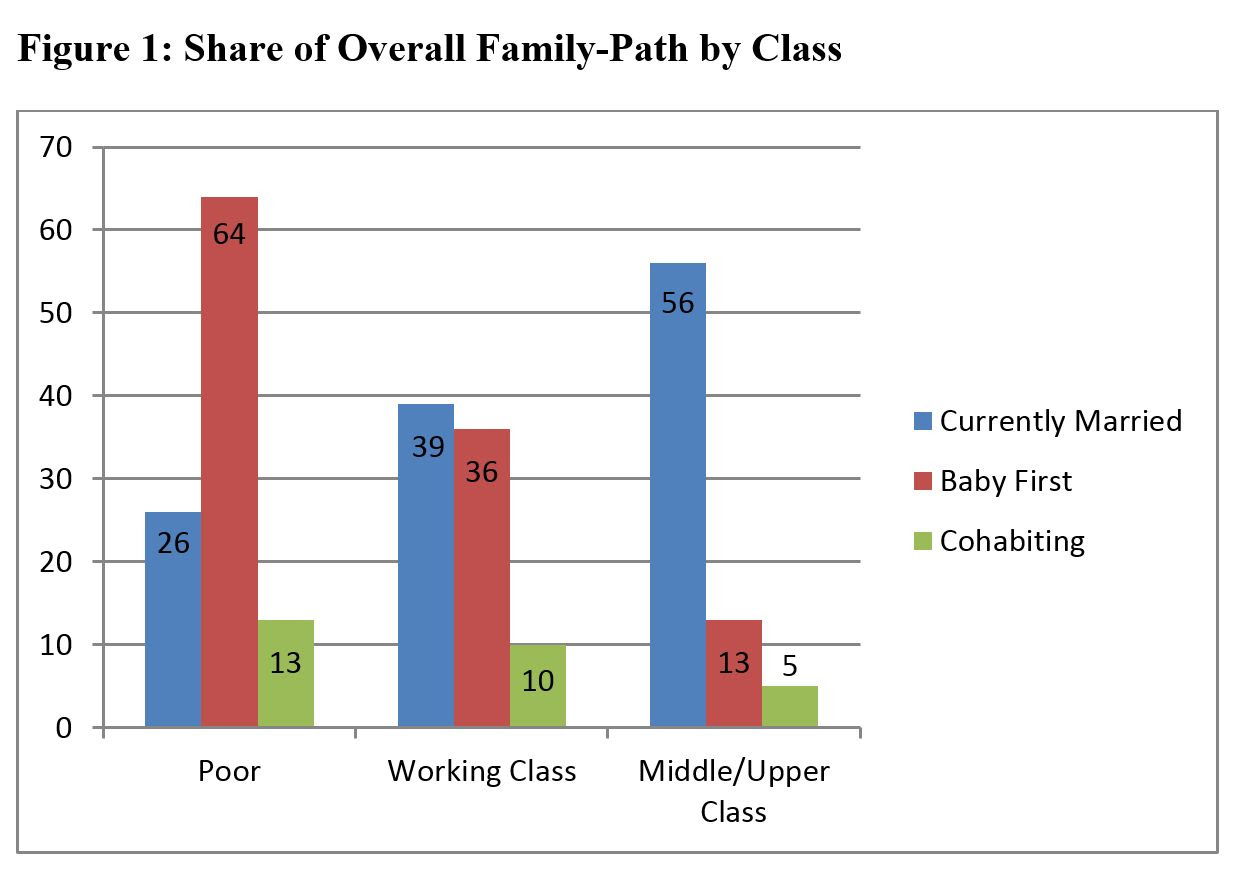 These troubling family-path trends leading to decreased life success are unfortunately true for millennials, as well. 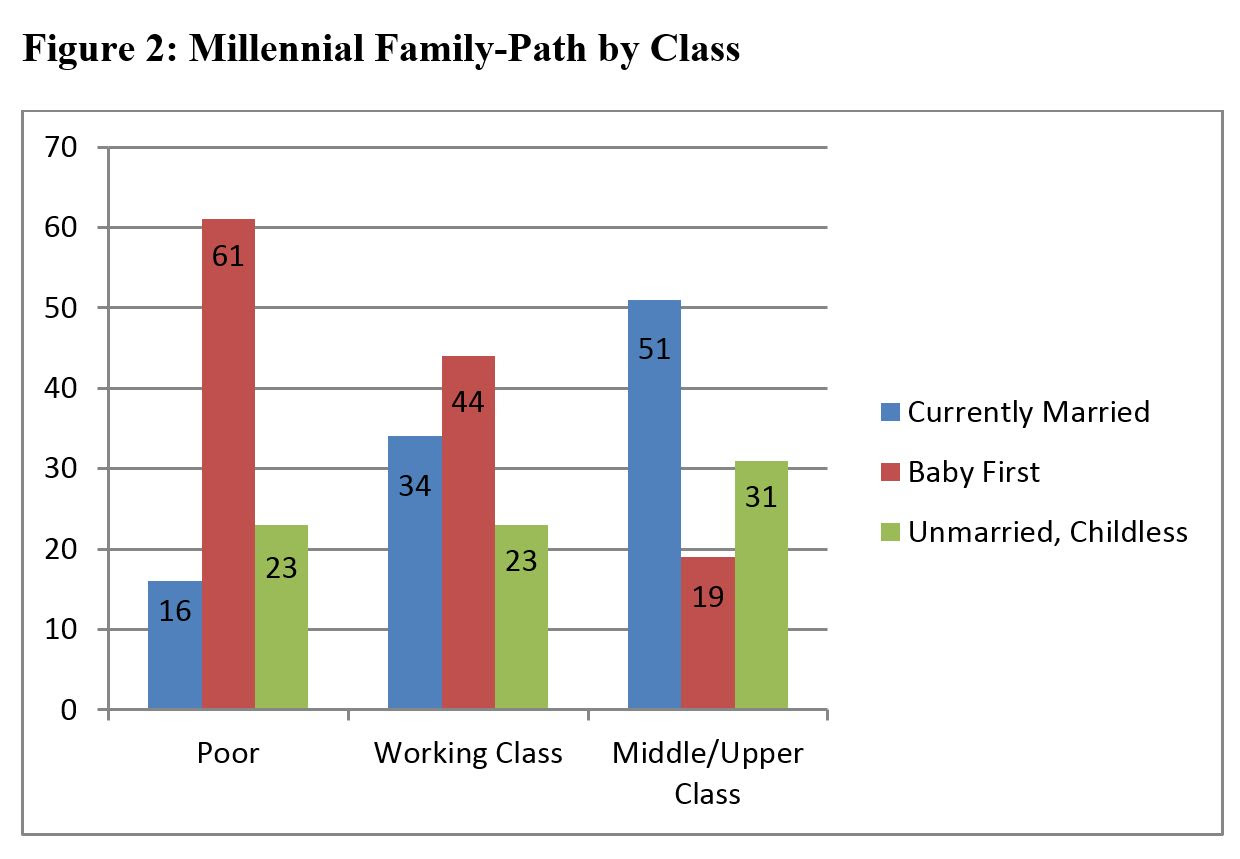 A recent report on this topic focusing on millennials reports that 97 percent of those who follow the success sequence—earn at least a high-school diploma, work, and marry before having children—will not be poor as they enter their 30s. This is largely true for ethnic minorities and those who grew up in poor families. But sadly, fewer millennials are keeping these things in order, compared to their Boomer and Xer forbearers. 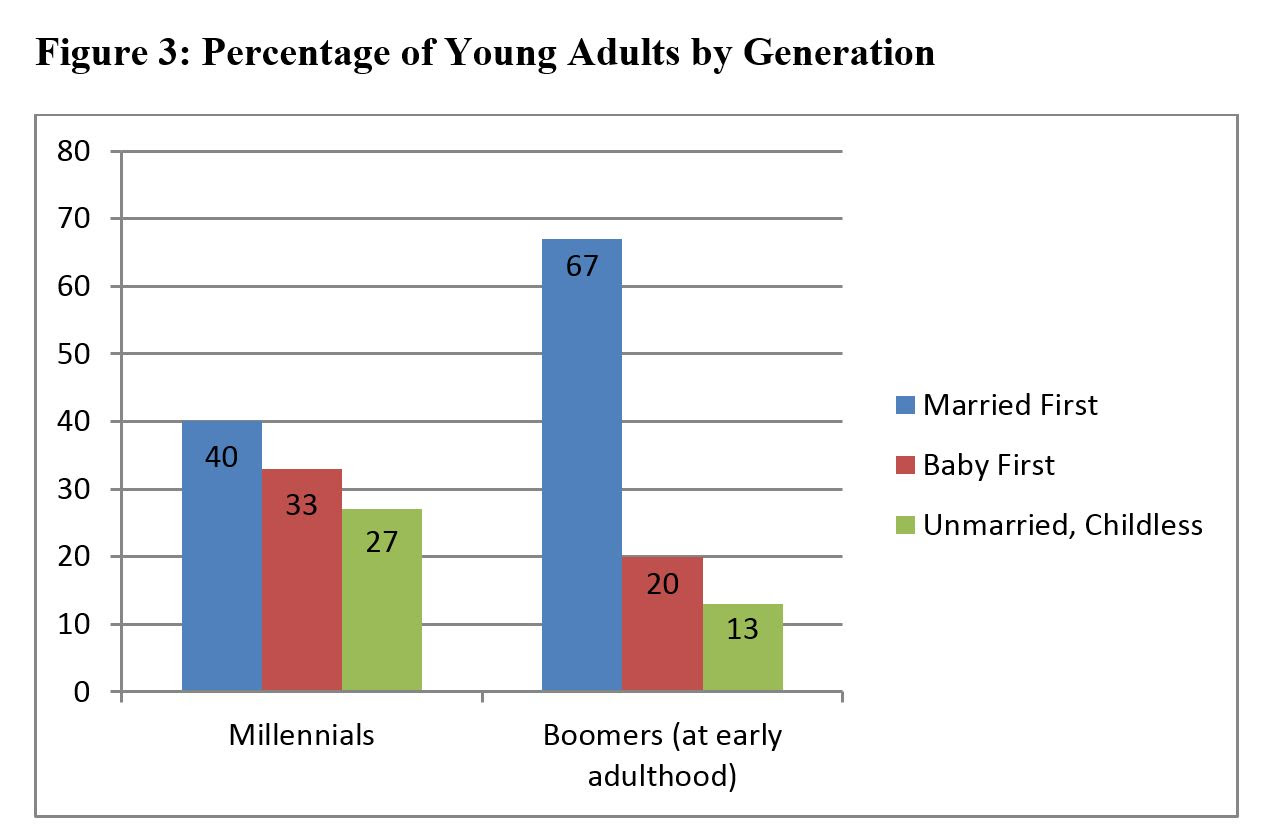 The success sequence of “first comes love” is so much more than moral choice or romantic idealism. These are deeply pragmatic, economic decisions powerfully affecting class mobility, where people live on the social scale, and the opportunities they will be able to provide for their children. This is because of the extraordinary economic power of marriage.

A consistent and irrefutable mountain of research has shown, reaching back to the 1970s and beyond, that marriage strongly boosts every important measure of well-being for children, women, and men. Pick any measure you can imagine: overall physical and mental health, income, savings, employment, educational success, general life contentment and happiness, sexual satisfaction, even recovery from serious disease, healthy diet and exercise. Married people rate markedly and consistently better in each of these, and so many more, compared to their single, divorced, and cohabiting peers. Thus, marriage is an essential active ingredient in improving one’s overall life prospects, regardless of class, race, or educational status.

This is why it’s not merely one-parent versus two-parent families that makes the difference. The U.S. Census Bureau finds the poverty rate for children living with two unmarried cohabiting parents is similar to that of single-mother homes than to those living with their married mother and father. Married people, regardless of how much they have, tend to manage their money differently than divorced, single, and cohabiting people.
Only 4 percent of homes with a married mother and father are on food stamps at any given time. But 21 percent of cohabiting and 28 percent of single-mother homes require such public assistance. Likewise, 78 percent of married people own their own home—a central goal in achieving the American Dream—while only 41 percent of cohabiting adults and 44 percent of singles do. Data indicates that marital status boosts home ownership more than home ownership increases marital opportunities.

Robert Lerman, an economist at the Urban Institute, reports the marriage benefit holds for even the most poor, and to a lesser degree but still consequentially for those who marry between conception and the birth of their first child. Despite “academic ability, school completion, family background, race, and age at pregnancy, women who are married between pregnancy and the birth of their first child averaged a 30 percent higher income-to-needs ratio and a 15 percent lower degree of [financial volatility].”
These numbers are not insignificant. Such marriages were associated with reducing the number of years the mother, father, and children spent in poverty by half, compared with those who did not marry before the birth of their first child. Remarkably, this difference was even greater—by substantial margins—for black mothers and those with low educational test scores. Lerman concludes, “Even among the mothers with the least qualifications and highest risk of poverty, marriage effects are consistently large and statistically significant.”
Even women entering marriage between the conception and birth of their first child, regardless of class, education, and race, benefit from a greater standard of living by the following percentages.
Shotgun weddings are not just a moral action. Even among households with similar incomes, and comparable demographic and educational characteristics, the following statistics demonstrate that, over the past year, married households are at least half as likely to have difficulty meeting their basic monthly living expenses and bills. This was most pronounced for black families. 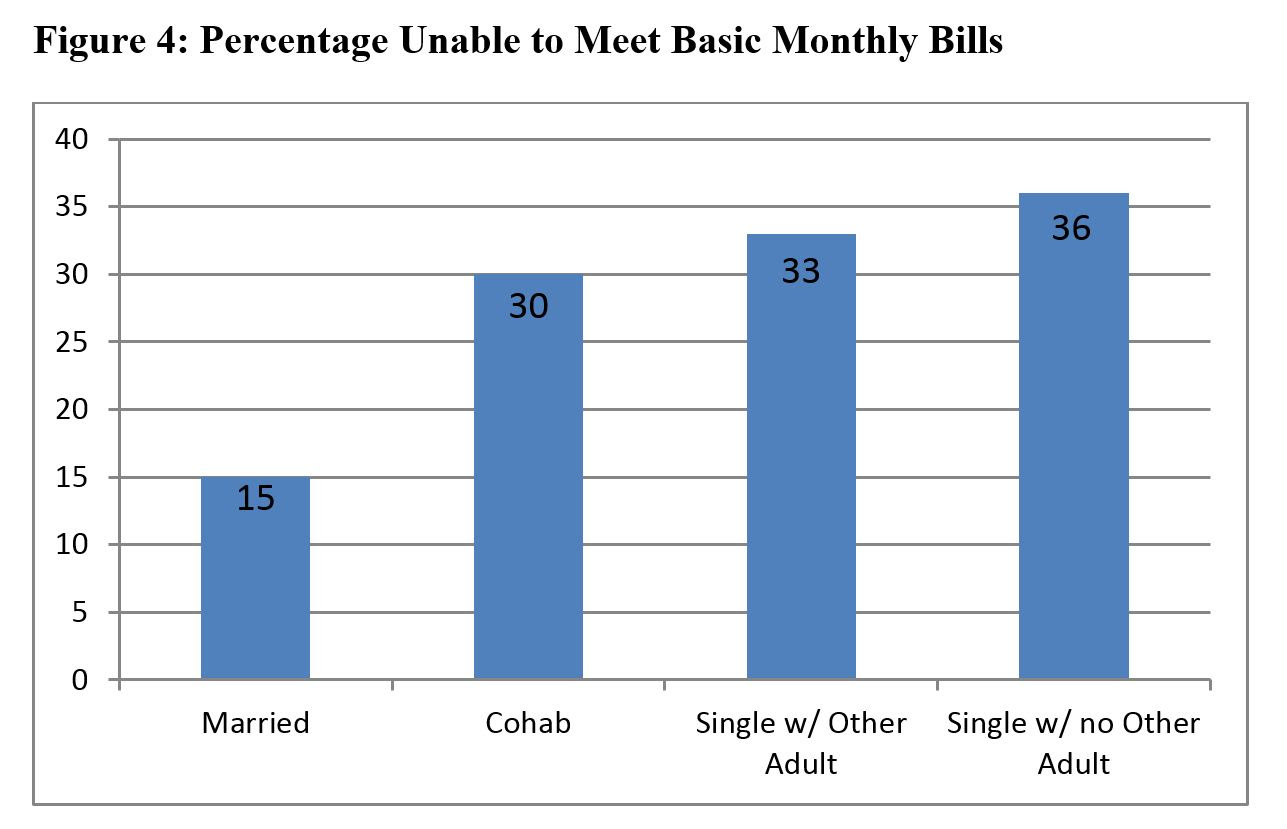 A major 2014 report from the American Enterprise Institute and the Institute for Family Studies at the University of Virginia reports that:

Marriage Is Good for People of Every Race

If You Really Care About Inequality, You Support Marriage

The evidence is impossible to ignore or explain away. Even The New York Times noted its importance in a major story some years ago entitled “Two Classes, Divided by ‘I Do.’”Marriage drives well-being and upward mobility. The absence of marriage diminishes it. Thus, the growing class divide. Any smart and compassionate effort to alleviate poverty and increase the well-being of our communities and its citizens cannot ignore this fact.
Today, many unfortunately believe that to be concerned about what kinds of families adults create and raise children in should be no one’s business. It’s a personal matter. Such people have no idea what a family is or does anthropologically. Each family is as much a public institution as it is private, if not more so. Its strength and weaknesses are felt throughout each community in countless ways. Government expands as marriage declines.
Working for healthy, well-formed, enduring marriages is one of the most effective ways we can do the work of social justice. That the effort is not hip and trendy has no bearing on its ability to change lives for the better. Decades of research and the lives of real people make the case over and again every day, for good or for bad. Let’s resolve as a nation to choose and work for the good and halt the ever widening chasm of class.
Source>http://thefederalist.com/2017/11/03/research-proves-no-1-social-justice-imperative-marriage/