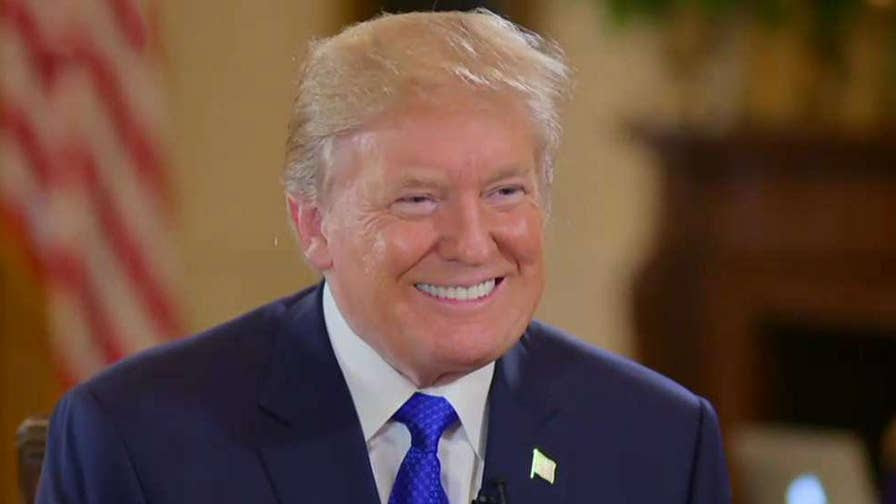 President Donald Trump gave a wide-ranging interview on Fox News’ “The Ingraham Angle” Thursday, revealing his thoughts on this week’s terror attack in New York City and the campaign actions of the Democratic National Committee.
Trump responded to claims from former DNC chairwoman Donna Brazile alleging that the committee rigged last year’s Democratic presidential primary between Clinton and Sen. Bernie Sanders.
“It's illegal, number one, and it's really unfair to Bernie Sanders,” Trump said of the Vermont senator. “I’m not a Bernie Sanders fan, although I must say I got a lot of his votes when he was thrown out. Many of those people voted for me because of trade because I agreed with him on trade. … But that was, I thought that was terrible.”
Trump also responded to recent revelations that the DNC — along with the Clinton campaign — funded the now-infamous “opposition research” dossier released last January. The president called the findings “absolutely inconceivable.”
“That dossier, which is totally fake and made up it’s like a novel … is a disgrace and it should not have been allowed to be used and then I hear the kind of money they spent,” Trump said, referring to reports Democrats paid as much as $9 million on it. “I think it’s a disgrace that a thing like that can take place.”
After Tuesday’s terror attack in Lower Manhattan, allegedly carried out by a man from Uzbekistan — whom Trump called a "horrible animal" — who was granted a green card through the Diversity Visa Program, Trump called for Congress to end the lottery-based immigration program.
“The justice system has to go quicker and it has to be really stronger and fairer,” the president said, one day after he referred to the U.S. justice system as a “laughingstock” and a “joke.”
“It’s very sad when you look at a lottery system and you have people coming into the country through the form of a lottery,” Trump said. “The countries aren’t putting their finest in there, they’re not putting their best and their greatest and their finest in there.”
Trump added he’s “already instructed Congress” to bring the Diversity Visa Program to an end.
TRUMP'S TAX PLAN: THE MAJOR CHANGES
Jumping to Trump’s tax reform plan, the president said his proposed tax cuts are “the biggest cuts in the history of our country.”
“We have reform and we have simplification and honestly I’m surprised a little bit to hear what you’re saying because we’ve really gotten great reviews people are loving it,” Trump said when he was told he was getting criticism from both Democrats and Republicans.
He alluded to a Washington Post report that recently gave Sen. Chuck Schumer, D-N.Y., “four Pinocchios” for “not telling the truth” about the tax plan, which Trump said is “really not for the rich, it’s for the middle class and it’s for jobs.”
Source>http://www.foxnews.com/politics/2017/11/02/trump-calls-dnc-primary-rigging-illegal-slams-fake-dossier-in-fox-news-interview.html
Posted by theodore miraldi at 8:05 AM