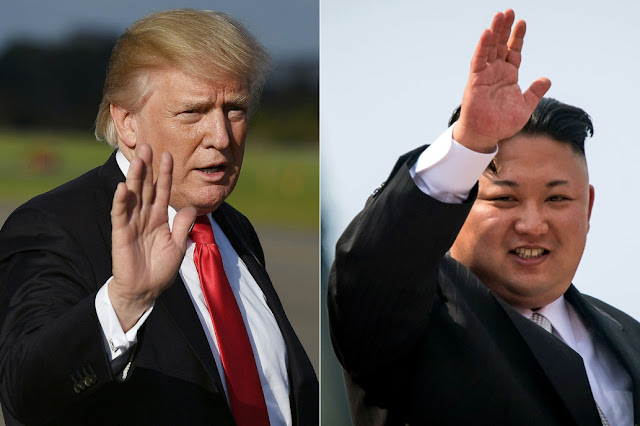 
President Trump abandoned his usual aggressive tone with North Korea on Tuesday and urged the regime​ to “come to the table” and “make a deal.”
“​I really believe that it makes sense for North Korea to come to the table and to make a deal that’s good for the people of North Korea and the people of the world​,” the president said in a speech in Seoul, South Korea, where he’s on the second leg of a trip to five Asian nations.
​Taking a page from the “speak softly and carry a big stick” approach to diplomacy, Trump touted America’s military might and referred to US Navy operations in the waters off the Korean peninsula that included three aircraft carriers, destroyers and submarines that he said “we hope to God we never have to use.”
“I think we’re making a lot of progress. I think we’re showing great strength. I think they understand we have unparalleled strength. There has never been strength like it,” he said during a joint news conference with South Korea’s President Moon Jae In.
But he would not elaborate on whether he was pursuing direct one-on-one talks with the President Kim Jong Un’s government.
“I don’t like talking about whether I see success or not in a case such as this,” he said. “We like to play our cards a little bit close to the vest.”
Dropping his previous “fire and fury” rhetoric and the “Rocket Man” taunting of the the regime’s leader, Trump said North Korea “is a worldwide threat that requires worldwide action.”
“We call on every responsible nation, including China and Russia, to demand that the North Korean regime end its nuclear weapons and its missile programs, and live in peace. As the South Korean people know so well, it’s time to act with urgency and with great determination,” he said in Seoul, which is fewer than 40 miles away from the demilitarized zone marking the border between the two countries.

“All nations must implement U.N. Security Council regulations and cease trade and business entirely with North Korea. It is unacceptable that nations would help to arm and finance this increasingly dangerous regime,” Trump continued.
Pyongyang has tested six nuclear devices and continues to develop intercontinental ballistic missiles with the aim to strike the US mainland.
In August and September it launched rockets that sailed over Japan and landed in the Pacific.
Trump pledged to support US allies in the region from North Korea.
“​As we work together to resolve this problem using all available tools short of military action, the United States stands prepared to defend itself and its allies using the full range of our unmatched military capabilities if need be,” he said.
Reiterating Trump’s comments, Moon said South Korea wants to continue seeking a diplomatic solution to bring “peace, stability and prosperity to the Northeast Asian region” and encouraged China and Russia to remain involved.
“We strongly urge North Korea to halt its nuclear and missile provocation, and to come to a dialogue table for denuclearization as soon as possible,” he said. “President Trump and I reaffirmed our current strategy, which is to maximize pressure and sanctions on North Korea until it gives up nuclear weapons and to come to the table for dialogue on its own.”
Trump’s more conciliatory remarks are distinctly different from those he made in early October when he undercut Secretary of State Rex Tillerson as he tried to open lines of communication with North Korea officials.
​”​I told Rex Tillerson, our wonderful Secretary of State, that he is wasting his time trying to negotiate with Little Rocket Man,” Tru​mp wrote on Twitter on Oct. 1.
The president arrived in Seoul from Tokyo on Tuesday as part his sweep through Japan, South Korea, China, Vietnam and the Philippines.
On Wednesday, he heads to Beijing where he’ll meet with President Xi Jinping.
He’s also expected to have a sit-down with Russian President Vladimir Putin on the sidelines of a gathering of Asian-Pacific leaders in Vietnam.
At the news conference with Moon, Trump spoke about the need for Russia and China to pressure Pyonyang.
“So China is out trying very hard to solve the problem with North Korea. We hope that Russia, likewise, will be helpful​,” Trump said. ​”So if we get China, if we get Russia – and we have some other countries, but we want to get most of them – we think that things will happen, and they could happen very quickly.​”​
Source>http://nypost.com/2017/11/07/trump-to-north-korea-lets-make-a-deal/