Trump, Xi Say They Will Blunt 'MENACE' North Korea 'TOGETHER' 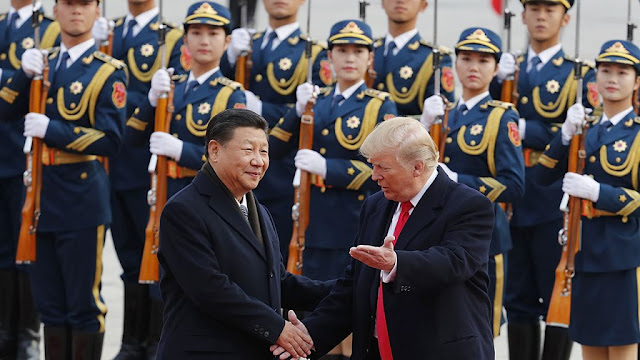 
President Trump and Chinese President Xi Jinping said Thursday that they have agreed to pursue the denuclearization of North Korea together, as Trump promised not to replicate “failed approaches” of his predecessors.
Trump and Xi met with U.S. and Chinese officials for two hours on Thursday morning and, in joint statements to reporters, affirmed their commitment to addressing the threat posed by North Korea.
“As long as we stand together, that threat will never happen—doesn’t even have a chance,” Trump said on Thursday. “The entire civilized world must unite to confront the North Korea menace and the entire world is watching us right now.”
Trump and Xi discussed their “mutual commitment” to complete the denuclearization of North Korea, and Trump said they promised not to “replicate failed approaches of the past.”
“And there were many,” Trump said, seemingly slamming past administrations for their struggle dealing with the rogue nation.
Xi said that China would work on a “solution for dialogue and negotiation” with North Korea, and “reiterated” their “firm commitment” to achieving a denuclearization of the Korean peninsula.
Trump also criticized China for its “very one-sided and unfair” trade deals, while also saying he couldn’t “blame” China for taking advantage of the U.S. in past years, in yet another swipe at past administrations.
TRUMP SAYS US TRADE WITH CHINA HAS NOT BEEN FAIR, URGES COUNTRY TO SQUEEZE NORTH KOREA
“I don’t blame China. Who can blame a country for being able to take advantage of another country for the benefit of its citizens? I give China credit,” Trump joked Thursday.
Xi promised to open more doors for foreign companies in China and described the U.S.-China relationship as one standing at a “new historic starting point.”
“The Pacific Ocean is big enough to accommodate both China and the United States,” Xi said.
But on North Korea, Trump praised Chinese efforts in restricting trade with Pyongyang and, further, called on all countries to stop doing business with the rogue regime.
The president’s comments, and the newfound joint agreement between Trump and Xi, come in the midst of his 13-day foreign trip to Asia. The president so far has visited Japan, South Korea and China.