Vicente Fox to Trudeau: Don't be 'JUDAS' on NAFTA 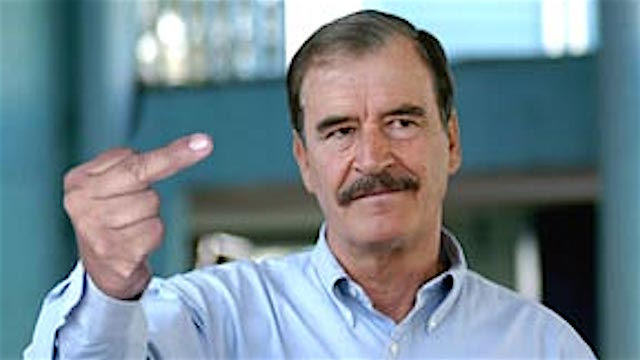 MEXICO CITY -- A former Mexican president has a warning for Prime Minister Justin Trudeau when it comes to NAFTA renegotiations: don’t betray us “like Judas.”
Vicente Fox, who was president from 2000 to 2006, made the biblical reference in an exclusive interview with CTV’s Washington correspondent Richard Madan, as trilateral talks continue in Mexico City.
“He should open his eyes because sometimes what I get from him is that he will protect Canada even by sacrificing Mexico,” Fox said of Trudeau.
“He might, like Judas, give us our strength and go with (the) United States and leave us aside,” he added. “I warn Trudeau and I warn Canada: you will not make it.”
Canada’s charm offensive with U.S. President Donald Trump has created speculation that the U.S. may prefer working out a bilateral trade deal with its northern neighbour over Mexico.
White House Press Secretary Sarah Huckabee Sanders told CTV News on Sunday that while no decision has yet been made, Trump is open to drafting a trade deal with Canada that excludes Mexico.
There has been some ambivalence among Canadian officials on separate deals with Mexico and U.S.
Foreign Affairs Minister Chrystia Freeland has routinely said that she is committed to working trilaterally to renew NAFTA as a three-country agreement.
A spokesperson for the Foreign Minister said Sunday: “As we have said from day one, we are committed to modernizing NAFTA as a strong trilateral agreement that is a win-win-win for all three countries.”
Meanwhile, top U.S. sources tell CTV News that American negotiators are frustrated with Canada for constantly rejecting proposals, such as those regarding the auto and dairy sectors, without offering any counter-proposals.
Analysts like Automotive Parts Manufacturer's Association president Flavio Volpe say Canada is playing the long game against an unpredictable administration.
“This could stretch right through 2018,” Volpe told CTV News. “And if you're going to do that, don’t waste any moment to introduce some actual logic and quantitative analysis.”
So far, all sides remain deadlocked.
Using rather undiplomatic language, Fox blamed Trump’s protectionist vision for the current stalemate, which he calls “stupid.”
“Trump, he says America (is) great! We will make America great again and the rest of the world, f--- you,” Fox said.
“Also we will never pay for that f---ing wall,” he added.
SOURCE>http://www.ctvnews.ca/world/vicente-fox-to-trudeau-don-t-be-judas-on-nafta-1.3684799
Posted by theodore miraldi at 8:38 AM