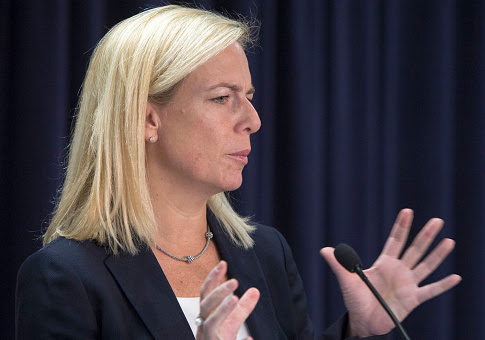 More than 35,000 individuals held in federal custody are unlawfully present in the United States, according to new data released Thursday by the Department of Homeland Security.
DHS counted some 58,766 known or suspected aliens in federal custody for the end of fiscal year 2017. Sixty-four percent of those individuals have been confirmed by Immigration and Customs Enforcement to be illegal aliens, while the remainder are still under investigation by ICE to determine their immigration status.
The total is divided among 39,455 people held in facilities administered by the federal Bureau of Prisons, as well as 19,311 people held in pretrial detention by the U.S. Marshals Service.
Among those whose status had been confirmed, 94 percent were determined to be unlawfully present. That includes a 92 percent unlawful rate among those in BOP custody, and a 97 percent rate among those in USMS custody.
This report, the third released this year, was released pursuant to an executive order issued by President Donald Trump in January. That order instructed DHS and the Department of Justice to collaborate in collecting information about incarcerated immigrants, towards the end of enacting the president’s aggressive immigration reform agenda.
Immigrants make up 22 percent of the federal prison population, as compared against 13.5 percent of the overall population. However, much of this disparity may be attributable to the federal government's responsibility for policing immigration offenses specifically—as of 2016, 62.8 percent of non-citizens incarcerated at the federal level faced charges of illegal reentry, an immigration offense.
The new report does not provide information about the distribution of offenses among the confirmed or suspected illegal alien offender population. Senior administration officials indicated that that information would be available in future reports, and referred reporters to information from the United States Sentencing Commission, which they said suggested that non-citizens were more likely to be convicted of immigration, money laundering, and drug offenses, especially along the southern border.
In general, non-citizen immigrants commit crimes at lower rates than U.S. citizens, and are less likely to be incarcerated than citizens. It is unclear as to what explains this disparity, though explanations include the threat of deportation that immigrants may face if caught committing a crime, thus adding to their overall possible punishment as compared against citizens.
Even one crime committed by an unlawfully present individual is too many in Attorney General Jeff Sessions's opinion.
"The simple fact is that any offense committed by a criminal alien is ultimately preventable. One victim is too many," Sessions said. "It's time for Congress to enact the President's immigration reform agenda so that we start welcoming the best and brightest while turning away drug dealers, gang members, and other criminals."
Also absent from the report is any information about incarceration of known or suspected aliens in state or local custody. These jails and prisons account for more than 90 percent of America's overall incarceration, meaning that the lack of state-level data leaves a conspicuous hole in the overall information in the report.
"DHS and DOJ are working to develop a reliable methodology for estimating the status of state and local incarcerated populations in future reports," the report noted.
Recently appointed Secretary of Homeland Security Kirstjen Nielsen nonetheless saw the report as evidence of the need for more work by her department.
"While the administration is working diligently to remove dangerous criminal aliens from our streets, this report highlights the fact that more must be done," Nielsen said. "We will continue to pursue President Trump's immigration priorities, including securing the border, enhancing interior enforcement, and pursuing a merit-based immigration system, but Congress must act immediately to adopt obvious solutions to strengthen DHS and DOJ efforts to confront dangerous criminal aliens."
Such policy solutions include an end to chain migration and the implementation of a merit-based system like the one proposed by Sens. Tom Cotton (R., Ark.) and David Perdue (R., Ga.) in the RAISE Act, a bill the Trump administration backs.
Source>http://freebeacon.com/issues/report-94-percent-confirmed-non-citizens-federal-custody-unlawfully-present/
Posted by theodore miraldi at 10:15 AM