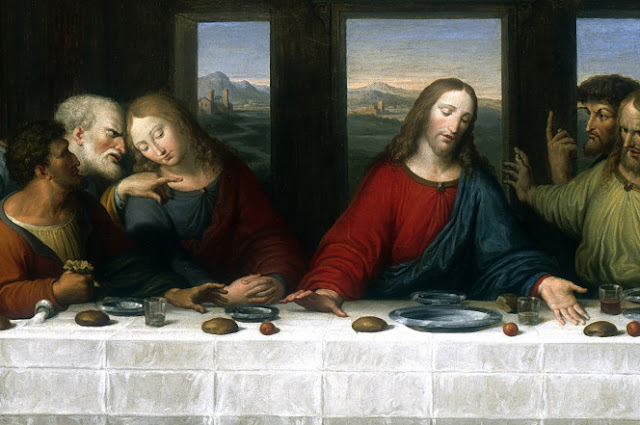 
The secret advice and prophecies Jesus gave his brother, James. It’s bound to be explosive stuff.
But the two books of the Apocalypse of James were rejected when the Emperor Constantine instructed his bishops to standardize the ascendant Christian religion.
We don’t know how these nobles and church leaders whittled down the mass of Christian writings in circulation at the time to the books which now form the New Testament.
But chief among them was likely to be one key concern: Was it the real deal?
Three hundred and thirty years is a lot of time for fan fiction to rise and circulate, after all.
Athanasius, Bishop of Alexandria, presented the approved books of the New Testament to the world amid much fanfare — and controversy — in 367 AD.
He was touted as having been touched by God: “Athanasius is one who can be trusted: he would not say anything that is not in accord with sacred scripture.”
His judgment was inviolate.
“No one may add to them and nothing may be taken away from them,” he wrote.
The Apocalypse of James was not among them.
Whatever the reason — doubts over their authenticity, controversial quotes or inconvenient truths — the books were outlawed.
But now an original Greek example of its texts has been found.
Greek is important. It’s seen as the progenitor language of the Christian faith. The language in which all the original — and authentic — works were first laid down.
Does this give the Apocalypse of James new strength?
Book burning
Fragments of the banned books attributed to James have been circulating for some time.
We mostly know them from writings found among a collection known as the Nag Hammadi library in December 1945.
These were large terracotta vessels, stuffed with 13 scrolls, many still safely sealed against the elements. They were believed deliberately buried during the fourth century to protect them from destruction.
These ancient texts had, after all, only recently been banned by the Emperor’s new Catholic Church.
Most of the surviving scrolls were written in the language of early Gnostic Christians based in Egypt — an unusual blend of Greek and Egyptian Demotic called Coptic.
To be in Coptic means they are, at best, translations of the original Greek.
And while their survival offers a unique insight into these writings, the fact they are translations may have introduced distortions.
Only a handful of the Nag Hammadi texts are in their original Greek.
But, earlier this year, University of Texas at Austin biblical scholars discovered a fragment lost among Egypt Exploration Society archives at Oxford University.
It was in Greek. It was part of the First Apocalypse of James.
“To say that we were excited once we realized what we’d found is an understatement,” says assistant professor of religious studies Geoffrey Smith. “We never suspected that Greek fragments of the First Apocalypse of James survived from antiquity. But there they were, right in front of us.”
The papyrus itself appears to date from the fifth or sixth century.
But the writings are likely to be copies of much older texts.
What Jesus told James
The two books of the Apocalypse of James purport to detail the teachings of Jesus to his brother James.
It’s written as a narration, where Jesus is engaged in a dialogue with his brother.
“The Lord said, ‘James, after these things I shall reveal to you everything, not for your sake alone but for the sake of the unbelief of men, so that faith may exist in them,’” a Coptic fragment reads.
He seeks to reassure his brother everything is as it should be. He describes heaven. He gives James the passwords necessary to guarantee his entry. He gives advice on fighting supernatural challenges. He foretells future events. He warns James of the circumstances surrounding his own martyrdom.
“The text supplements the biblical account of Jesus’ life and ministry by allowing us access to conversations that purportedly took place between Jesus and his brother, James — secret teachings that allowed James to be a good teacher after Jesus’ death,” Smith said.
Many other Early Christian texts, some of them immensely popular, were among those banned.
Names include the Epistle of Barnabas, The Shepherd of Hermas, The Magdalene Gospel and The Gospel of Judas. Yet others were attributed to more familiar authors — including Matthew, Mark, John and Peter.
Thanks to the Gnostic Coptic fragments preserved at Nag Hammadi, we have a taste of what some of these contained.
But their actual authors, authenticity — or lack of it — will likely never be known.
Smith and Landau announced the discovery of the Greek Apocalypse of James at the Society of Biblical Literature Annual Meeting in Boston last month.
SOURCE>https://nypost.com/2017/12/01/banned-bible-book-of-jesus-secret-prophecies-to-his-brother-unearthed/