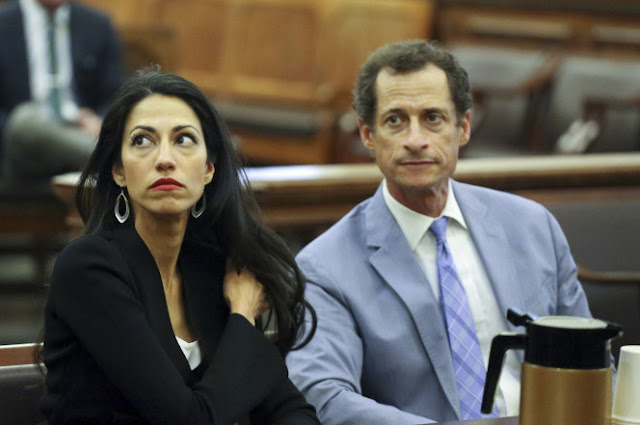 
The State Department Friday released a trove of emails from Huma Abedin that the feds discovered on her husband Anthony Weiner’s laptop — including at least five that were marked as “classified.”
Most of the emails were heavily redacted because they contained classified material — but one that was sent on Nov. 25 2010 was addressed to “Anthony Campaign,” an apparent address belonging to Weiner.
The message contained a list of talking points for then-Secretary of State Hillary Clinton, who was prepping to make a call to Prince Saud of Saudi Arabia to warn him about sensitive documents that had been given to WikiLeaks by then-Army intelligence officer Bradley Manning.
“I deeply regret the likely upcoming WikiLeaks disclosure,” read one of the talking points.
“This appears to be the result of an illegal act in which a fully cleared intelligence officer stole information and gave it to a website. The person responsible will be prosecuted to the full extent of the law” the message continued.
“This is the kind of information we fear may be released: details of private conversations with your government on Iraq, Iran and Afghanistan.”
State was expected to dump roughly 2,800 emails as a result of a court case won by the conservative watchdog group Judicial Watch.
This is a major victory,” Judicial Watch President Tom Fitton, said in a statement.
“After years of hard work in federal court, Judicial Watch has forced the State Department to finally allow Americans to see these public documents.”
He said the discovery of the emails underscores the need for the Justice Department to investigate Clinton and Abedin’s use of a private email server to conduct classified government business.
“That these government docs were on Anthony Weiner’s laptop dramatically illustrates the need for the Justice Department to finally do a serious investigation of Hillary Clinton’s and Huma Abedin’s obvious violations of law.”
Abedin was an aide and confidant of Hillary Clinton who has been described as a second daughter to the former first lady.
Weiner, a former Democratic congressman and Big Apple mayoral candidate, began a 21-month prison sentence last month after being convicted of sexting a 15-year-old girl.
Source>https://nypost.com/2017/12/29/classified-documents-among-newly-released-huma-abedin-emails-found-on-weiners-laptop/
Posted by theodore miraldi at 5:11 PM