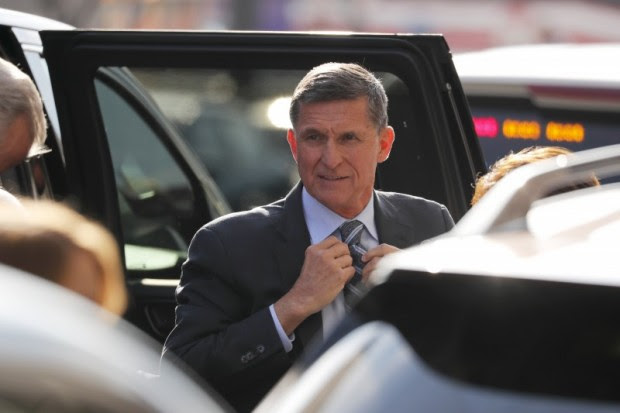 Chuck Ross
The FBI agent who was fired from Special Counsel Robert Mueller’s Russia investigation team for sending anti-Donald Trump text messages conducted the interviews with two Hillary Clinton aides accused of giving false statements about what they knew of the former secretary of state’s private email server.
Neither of the Clinton associates, Cheryl Mills and Huma Abedin, faced legal consequences for their misleading statements, which they made in interviews last year with former FBI section chief Peter Strzok. (RELATED: Anti-Trump Text Messages Show Pattern Of Bias On Mueller Team)
But another Strzok interview subject was not so lucky.
Michael Flynn, the former national security adviser, pleaded guilty last week to lying during an interview he gave on Jan. 24 to Strzok and another FBI agent. Circa journalist Sara Carter reported on Monday that Strzok took part in that interview with the retired lieutenant general. (RELATED: Anti-Trump FBI Agent Conducted Interview With Michael Flynn)
At the time, Strzok was the FBI’s top investigator on the fledgling investigation into Russian interference in the presidential campaign. He was appointed to supervise that effort at the end of July 2016, just weeks after the conclusion of the Clinton email probe. CNN reported on Monday that as the FBI’s No. 2 counterintelligence official, Strzok signed the documents that officially opened the collusion inquiry.
The starkly different outcomes from Strzok’s interviews — a felony charge against Flynn and a free pass to Mills and Abedin — are sure to raise questions from Republicans about double-standards in the FBI’s two most prominent political investigations. FBI Director Christopher Wray will likely be pressed on the Strzok scandal on Thursday when he attends an oversight hearing before the House Judiciary Committee.
Strzok was also a prominent part of the Clinton investigation, so much so that he conducted all of the most significant interviews in the case.
Along with Justice Department attorney David Laufman, Strzok interviewed Clinton herself on July 2, 2016. The pair also interviewed Mills, Abedin and two other Clinton aides, Jake Sullivan and Heather Samuelson.
Summaries of the interviews, known as 302s, were released by the FBI last year.
A review of those documents conducted by The Daily Caller shows that Mills and Abedin told Strzok and Laufman that they were not aware of Clinton’s server until after she left the State Department.
“Mills did not learn Clinton was using a private server until after Clinton’s [Department of State] tenure,” reads notes from Mills’ April 9, 2016 interview. “Mills stated she was not even sure she knew what a server was at the time.”

Abedin also denied knowing about Clinton’s server until leaving the State Department in 2013.
“Abedin did not know that Clinton had a private server until about a year and a half ago when it became public knowledge,” the summary of Strzok’s interview with Abedin states.

But undercutting those denials are email exchanges in which both Mills and Abedin either directly discussed or were involved in discussing Clinton’s server. (RELATED: Chaffetz: Cheryl Mills ‘Lied To Everybody’ About Clinton’s Server)
“hrc email coming back — is server okay?” Mills asked in a Feb. 27, 2010 email to Abedin and Justin Cooper, a longtime aide to Bill Clinton who helped set up the Clinton server.
“Ur funny. We are on the same server,” Cooper replied.

Mills and Abedin were also involved in an Aug. 30, 2011 exchange in which State Department official Stephen Mull mentioned that Clinton’s “email server is down.”
And in a Jan. 9, 2011 email exchange, Cooper told Abedin that Clinton’s server had been malfunctioning because “someone was trying to hack us.”
“Had to shut down the server,” wrote Cooper, who told the FBI in his interviews that he discussed Clinton’s server with Abedin in 2009, when it was being set up.

Former FBI Director James Comey defended the Clinton aides’ inconsistent statements in a House Judiciary Committee hearing held on Sept. 28, 2016.
“Having done many investigations myself, there’s always conflicting recollections of facts, some of which are central [to the investigation], some of which are peripheral,” Comey told Jason Chaffetz, a former Utah congressman who served on the committee last year.

Cheryl Mills listens as Hillary Clinton testifies before the House Select Committee on Benghazi on Capitol Hill in Washington, DC, October 22, 2015. (SAUL LOEB/AFP/Getty Images)
Chaffetz was not buying Comey’s dismissive response.
“I think she lied to everybody,” he said of Mills in an interview on Fox News the night of the Comey hearing.
“There’s direct evidence that she actually did know [about the server],” said Chaffetz, who added that Comey’s defense of Mills “makes no sense.”
Chaffetz suggested that Mills would have had an incentive to deny knowing about the server during Clinton’s State Department tenure because it would allow her to cite attorney-client privilege to avoid discussing certain aspects of Clinton’s email setup. Mills began working as one of Clinton’s lawyers just after they left the State Department.
Strzok’s role in the Clinton and Russia investigations took on a new significance on Saturday after the bombshell revelation that the FBI veteran exchanged politically-charged text messages last year.
Strzok was kicked off of Mueller’s team over the summer after the Justice Department’s inspector general discovered that he sent the messages to Lisa Page, an FBI lawyer and his mistress. The watchdog has been investigating the FBI and DOJ’s handling of the Clinton email matter.
Page also worked on the Mueller team for a short time over the summer.
TheDC also discovered that Strzok’s wife, a Securities and Exchange Commission attorney named Melissa Hodgman, has a strong pro-Clinton bias. Her Facebook account shows she’s a member of groups called “We Voted for Hillary” and “Thank You Obama.”
It was reported back in August that Strzok had been removed from the Mueller team to the FBI’s human resources department. Mueller’s office had declined for months to comment on the mysterious personnel move.
It was also revealed on Monday that Strzok was the FBI agent responsible for softening language that Comey used in his July 5, 2016 statement closing the Clinton investigation. Strzok edited a rough draft of Comey’s speech, changing out the phrase “grossly negligent” — a term which has legal weight — with the softer phrase, “extremely careless.” (RELATED: Anti-Trump FBI Agent Softened Comey’s Description Of Clinton’s Email Conduct)
The FBI and Special Counsel’s Office did not respond to requests for comment.
SOURCE>http://dailycaller.com/2017/12/04/clinton-aides-went-unpunished-after-making-false-statements-to-anti-trump-fbi-supervisor/
Posted by theodore miraldi at 8:27 AM