A growing number of Republicans on Capitol Hill are demanding answers after an investigative report this week claimed the Obama administration gave a free pass to Hezbollah’s drug-trafficking and money-laundering operations to help ensure the Iran nuclear deal would stay on track.

"If the Obama administration failed to use the authorities that Congress has authorized to stop Hezbollah terrorists and their associates from pouring cocaine onto our streets to fund terrorism and acquire weapons of mass destruction, it was a colossal mistake," Nebraska Republican Sen. Ben Sasse wrote in a Thursday letter to the Justice, Treasury and State Departments, requesting “answers to these disturbing allegations.”

Added Sasse: "If the administration did so in order to shore up its foolish nuclear deal with Iran, it was a mistake of historical proportions, a mistake the consequences of which reach from the battlefields of Syria to the streets of Omaha and Scottsbluff." 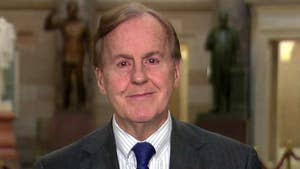 Reps. Jim Jordan of Ohio and Ron DeSantis of Florida, two Republicans on the House Oversight Committee, also sent Attorney General Jeff Sessions a letter Thursday about the report, asking the Justice Department to turn over documents and other related records.

“We have a responsibility to evaluate whether these allegations are true, and if so, did the administration undermine U.S. law enforcement and compromise national security,” the lawmakers wrote in the letter.

According to a bombshell exposé in Politico on Sunday, an elaborate campaign led by the Drug Enforcement Administration, known as Project Cassandra, targeted the Lebanese militant group’s criminal activities.

But when Project Cassandra leaders, who were working out of a DEA facility in Chantilly, Virginia, sought approval for some significant investigations, prosecutions, arrests and financial sanctions, Justice and Treasury Department officials delayed, hindered or rejected their requests, according to Politico.

“This was a policy decision, it was a systematic decision,” David Asher, who helped establish Project Cassandra as a Defense Department illicit finance analyst in 2008, told Politico. “They serially ripped apart this entire effort that was very well supported and resourced, and it was done from the top down.”

In their letter to the Justice Department, Jordan and DeSantis requested a variety documents, including records related to Project Cassandra and the DEA’s law enforcement efforts against Hezbollah.

Since the report surfaced, former Obama administration officials have broadly dismissed the allegations as false.

“There are many reasonable critiques of Obama's foreign policy,” former Obama official Tommy Vietor tweeted. “The idea that he was soft on Hezbollah is not one of them. The story is so manufactured out of thin air that it's hard to push back except to say that it's a figment of the imagination of two very flawed sources.”

There are many reasonable critiques of Obama's foreign policy. The idea that he was soft on Hezbollah is not one of them. The story is so manufactured out of thin air that it's hard to push back except to say that it's a figment of the imagination of two very flawed sources.
7:18 PM - Dec 19, 2017
373373 Replies
519519 Retweets
2,4912,491 likes
Twitter Ads info and privacy

“These revelations are shocking and infuriating,” Pittenger said in a statement to Fox News. “While American soldiers were bravely fighting ISIS terrorists, with some paying the ultimate price, the Obama administration reportedly was protecting Hezbollah terrorists who were funding themselves by trafficking illegal drugs. No wonder President Obama couldn’t bring himself to call them ‘Radical Islamist Terrorists.’”

Gowdy later said on Fox News this week that the allegations are “worthy of investigation.”

“It’s an incredible allegation that any administration would ignore one terrorist group because you were trying to curry favor with another terrorist group,” the South Carolina Republican said. “It is incendiary and it is worthy of investigation.”

Gowdy added, “If it's true it's a pretty damning indictment of Obama's search for a legacy and his willingness to do anything to get one.”