Crack Down on UNRWA, Finally END FICTION of Palestinian ‘Refugees’ 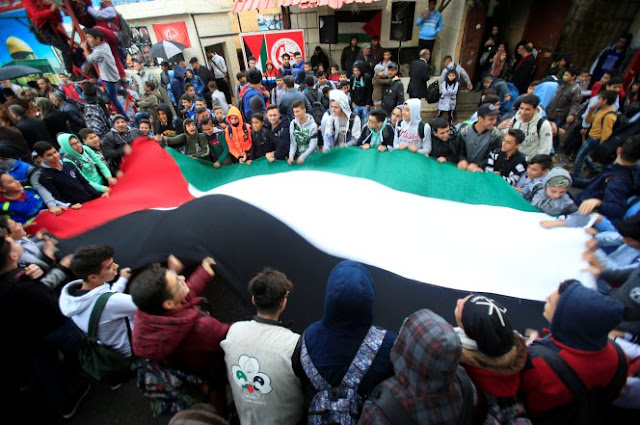 As the UN General Assembly voted to reject America’s recognition of Jerusalem as the capital of Israel, US Ambassador Nikki Haley issued a stern warning: We’ll remember this the next time you come calling for more hard-earned American taxpayer dollars. Most nation-states called her bluff, leaving many to wonder what comes next.


If President Trump wants to use his financial leverage at the United Nations to strike at the heart of the anti-America, anti-Israel institutional infrastructure, he should look no further than the agency responsible for Palestinian refugees: the United Nations Relief and Works Agency.
By most definitions, refugees are those forced to flee their country because of persecution, war or violence. Nearly every refugee in the world is cared for by the United Nations High Commissioner on Refugees, whose ultimate goal is repatriation, resettlement and integration. The exception? Palestinian refugees.
Arab states insisted on a different definition for Palestinian-Arab refugees of the Israeli War of Independence — and a different agency to care for them. Today, millions of people are referred to as “Palestinian refugees” even though the only home they, and in many cases even their parents and grandparents, have ever known is either a refugee camp or an Arab host nation like Jordan.
Rather than use the billions of dollars of international assistance provided since 1950 to resettle and integrate Palestinian-Arab refugees — just as Israel successfully resettled and integrated Jewish refugees from the Middle East, North Africa and the Soviet Union — UNRWA’s mandate has always been to keep Palestinians as perpetual refugees.
In truth, it’s not a refugee agency but a welfare agency, which keeps millions of people in a permanent state of dependency and poverty — all while feeding Palestinians an empty promise that one day they’ll settle in Israel.
Yet the United States remains the agency’s largest single-state donor.
Unfortunately, every time Congress tries to expose the fiction of “the Palestinian refugee,” it runs up against a State Department fiercely protective of UNRWA and its mythology. In 2012, an amendment to the annual State-Foreign Operations appropriations bill asked the Obama administration a simple question: How many of the Palestinians currently served by UNRWA were personally displaced by the 1948 war?
The point was to confirm to the world that there are only a relative handful of true Palestinian refugees still alive who may be entitled to repatriation or compensation. The rest, the descendants, are impoverished Palestinian-Arabs who will either become citizens of a future Palestinian state or be absorbed by Arab host nations.
While an official report was eventually sent to Congress, its contents were kept classified to deny the American public from knowing the truth. The Trump administration can take a giant step toward Middle East peace by declassifying that report, updating it and formally adopting a definition for Palestinian refugees that makes a clear distinction between refugees displaced by the 1948 war and their descendants.
The administration and Congress should work together to change the way America funds UNRWA, making clear to taxpayers how much money goes to refugee assistance and how much subsidizes a culture of welfare and terrorism.
Future funding of the agency should be tied to a clear mission of resettlement, integration and economic self-sufficiency. A timetable and work plan should be established for UNRWA’s integration into UNHCR. Conditions should be set in the annual foreign bill, giving Haley the leverage she needs to force changes in the agency’s next biennium budget.
Nations of the world showed their true colors last week. Far too many cared more about castigating Israel than their relationship with the United States.
UNRWA is a case study in the institutional bias that America helps fund at the United Nations. Shining a light on this agency and making it a centerpiece of a new reform agenda would be a victory for American taxpayers and a defeat for the international movement to castigate our closest ally in the Middle East.
Richard Goldberg is a senior advisor at the Foundation for Defense of Democracies.
Source>https://nypost.com/2017/12/27/trump-should-crack-down-on-unrwa-finally-end-fiction-of-palestinian-refugees/
Posted by theodore miraldi at 10:20 AM