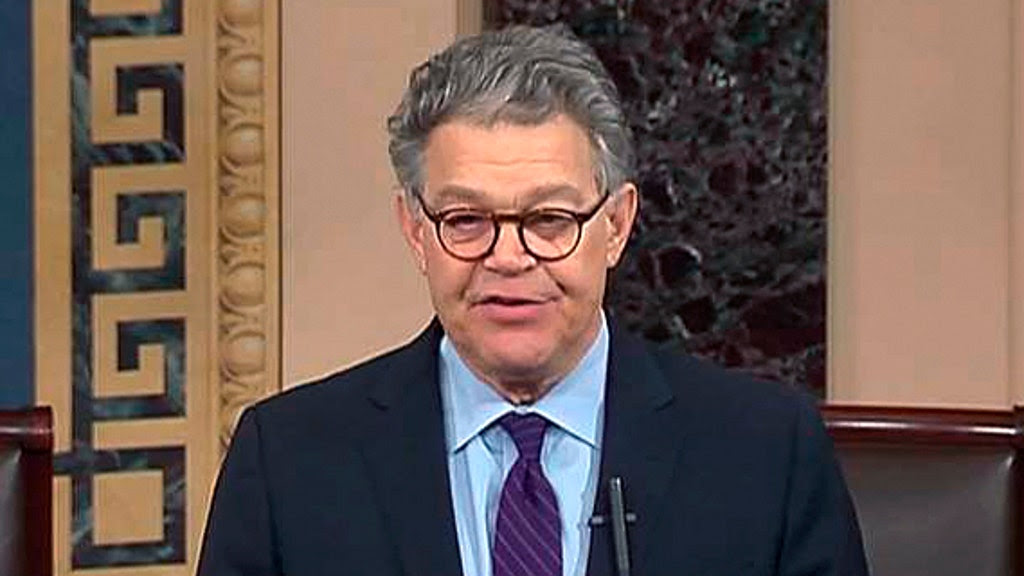 
In the comedy movie “Anchorman,” comedian Will Farrell advises his TV audience to “stay classy.” On Thursday, former “Saturday Night Live” comedian Al Franken didn’t follow that advice and resigned from the U.S. Senate in a particularly classless way.
Even after eight women told reporters that the Minnesota Democrat had groped or forcibly kissed them, Franken denied he had done anything wrong.
Franken said from the Senate floor that “some of the allegations are simply not true” and that he remembered other accusations differently. He then tried to wrap himself in a feminist flag by vowing he had always been a “champion of women” and saying “I respect women. I don’t respect men who don’t.”
Nonetheless, Franken announced he would resign from the Senate seat he’d held for eight years in coming weeks because he couldn’t defend himself before the Ethics Committee and at the same time focus on being a senator.
Pardon me for saying it, but that’s horsepucky.

Political observers say the speed with which Democrats forced Franken and Michigan Democratic Rep. John Conyers, the longest-serving member of Congress, to resign over sexual misconduct allegations is breathtaking.

Franken said earlier that he was confident he could ride out the Ethics Committee probe of his pre-Senate behavior and seek forgiveness from the voters. What forced him into his sudden departure was the decision by his party’s leadership to sacrifice him so they could spend the next year before the midterm elections painting Republicans as waging a “war on women.”
Franken himself signaled what the Democratic playbook will be in 2018. He said it was ironic that he is leaving office when President Trump, who has been accused of sexual misconduct by several women, sits in the Oval Office. Franken also said his departure was ironic because Republican Roy Moore, who has been accused of sexual misconduct with teenage girls in Alabama nearly 40 years ago, may win a special election to the Senate from that state Tuesday.
“Democrats see the Russia probe petering out, the economy growing and ISIS in retreat,” former Reagan political director and Fox News contributor Ed Rollins told me this week. “They have to change the argument to Republicans are complicit in the abuse of women.”
Political observers say the speed with which Democrats forced Franken and Michigan Democratic Rep. John Conyers, the longest-serving member of Congress, to resign over sexual misconduct allegations is breathtaking.
Sen. Kirsten Gillibrand, D-N.Y., was sending birthday greetings and displaying pictures of herself with President Bill Clinton just last year. Then last month, she suddenly announced that Clinton should have resigned the presidency back in 1998 for his misbehavior with women.
“She abandoned the sinking Clinton ship with such alacrity, the rats were left gaping in astonishment,” a GOP senator drolly observed this week of his New York colleague.
Some savvy Democrats agree that the party’s shift from backing the right of Franken and Conyers to due process to calling for their heads may look too opportunistic to have long-lasting political benefits.
Democratic strategist Christy Setzer told The Hill newspaper: “There’s no good way to message ‘Our side’s sexual harassment isn’t as bad as your side’s.”
Setzer was joined in the assessment by Democratic Rep. Kathleen Rice of New York, a former district attorney now in her second term in Congress. Rice was one of the first in Congress to call for the resignations of Franken and Conyers, and she isn’t impressed that her fellow Democrats delayed for so long in demanding they resign.
“When you make decisions based on politics, sometimes you forfeit the moral high ground, and that’s what I think happened,” Rice told a news conference. “You have the president endorsing Roy Moore and you have Nancy Pelosi somewhat defending Conyers by calling him an ‘icon.’ I just think at that point both sides lose, and none of us have clean hands when it comes to this issue.”
But that doesn’t mean that sex scandals and investigations won’t dominate coverage of Congress in the coming election year. No doubt there are other members in both parties who have sordid episodes in their past that will be uncovered by either social or mainstream media.
In addition, many Republicans have already said that should Roy Moore be elected senator from Alabama on Tuesday, he will be the immediate subject of an Ethics Committee probe. And many Democrats want to immediately move to expel Moore from his Senate seat should he win.
Of course, the new sensitivity and attention being paid to sexual misconduct allegations is welcome and long overdue. But there is a real danger in a rush to judgment and a minimization of the due process rights of people in public life.
Almost all of Franken’s alleged misconduct occurred before he became a senator. Moore’s alleged misconduct with teenage girls dates back to the 1970s and 1980s.
Can the Senate really afford to become preoccupied with investigating the background of senators for behavior that allegedly occurred long before they were elected?


Al Franken and Roy Moore are creepy narcissists. But even “deplorable” people deserve due process. And the rest of us shouldn’t be subjected to the hypocrisy of people who’ve downplayed the issue of sexual misconduct for years from turning it into a political football.
SOURCE>http://www.foxnews.com/opinion/2017/12/07/democrats-forced-franken-out-to-ramp-up-their-strategy-to-bring-down-trump.html
Posted by theodore miraldi at 8:10 AM