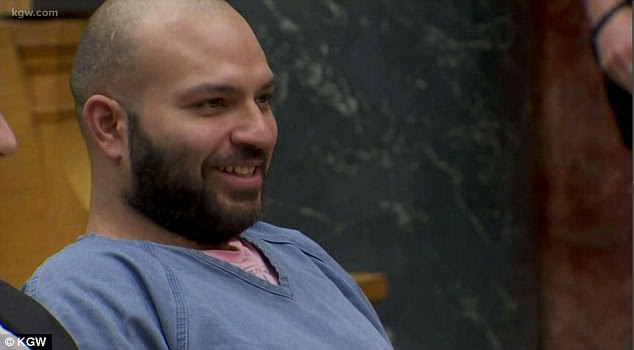 A Mexican man who was deported from the US 20 times has been convicted of 10 counts including sexual assault in Oregon.
On Friday, Sergio Jose Martinez, 31, was sentenced to 35 years in prison in a Portland courtroom after pleading guilty to kidnapping, sexual assault, sodomy and several other counts, KOIN reported.
Martinez smiled throughout the trial, and as he left, he gave one grim parting shot to his two victims' relatives: 'See all you guys in Hell.'
The first attack occurred early on the morning of July 24, when Martinez entered the Northeast Portland home of a 65-year-old woman through a window she had left open to cool the house.
Wielding a metal rod, Martinez told the woman to get down on the ground, where he bound and blindfolded her, threatened to murder her, and then sexually assaulted her, KGW reported.
He stole the woman's purse and car; she called the police from a neighbor's home, and they located the vehicle and put it under surveillance.
While they kept an eye on the car, however, Martinez was stalking his second victim in a parking garage on the corner of Northeast 21st Avenue and Northeast Halsey Street. 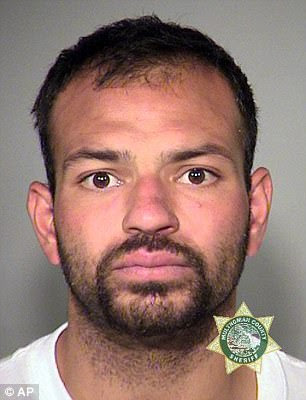 +3
Martinez, a Mexican man who has been deported from the United States 20 times, received 35 years in prison in the Portland, Oregon courthouse
He approached her carrying a knife and made her get into her car; as he got in after her she attempted to escape, but he was able to grab her and start slamming her head into the ground.
The woman called out for help and as passersby approached, Martinez attempted to steal her car, then fled on foot when it failed to start. Police caught him minutes later.
Two relatives of one of the victims, and one of the victims herself, spoke during the sentencing phase Friday, in which Martinez often grinned.
A brother of one victim told Martinez: 'Sergio, no sentencing is enough. I rather you rot in Hell.'
Deputy District Attorney Amity Girt, the prosecutor on the case, said: 'We had some very powerful victim impact statements that said it all.
'It was really breathtaking to hear the far-reaching consequences of violent crime, the emotional injury.'
Under the agreement that spared Martinez a possibly longer sentence if he had been found guilty at trial, he pleaded guilty to 10 counts, including first-degree burglary, sodomy, sex abuse, kidnapping, robbery, and second-degree assault.
Martinez's lawyer, Jonathan Sarre, said his client 'suffers from some mental illnesses; often such people may do inappropriate things in these situations.'
However, he acknowledged that a doctor had declared Martinez competent to stand trial.
Martinez had been freed from jail in Portland a week before the attacks; he was in there for interfering with police and providing a false birth date.
He was released despite a request from US Immigration and Customs Enforcement for the Multnomah County Sheriff's Office to hold him so the agency could take him into custody.
Oregon became America's first sanctuary state when it adopted a law in 1987 preventing law enforcement from detaining people who are in the United States illegally but have not broken other laws. 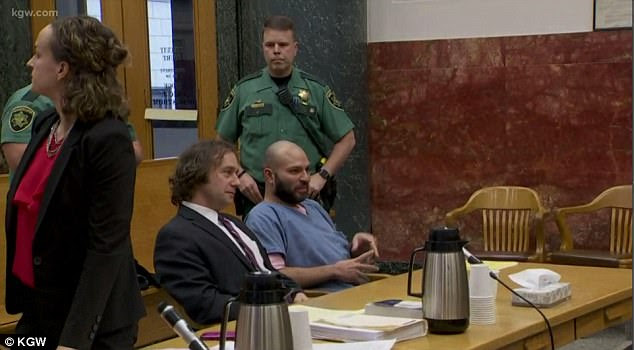 +3
The smirking criminal told the victims' families he would 'see you in Hell' after they blasted him in court. ICE said they plan to deport him again once he's finished his 35-year prison sentence
Sheriff Michael Reese said he could not legally continue to hold Martinez on the federal agency's 'immigration detainer' request, but if ICE had sent a criminal detention warrant signed by a judge, he could have been held longer.
'He was released consistent with the orders of the court. No federal or state criminal warrants were present at the time he left our custody,' he said at the time.
However, he noted that Martinez had been deported before 'and has returned to commit additional crimes.'
'It would help our community to understand how he was held accountable by federal authorities for multiple, illegal re-entries' Reese said.
US Attorney General Jeff Sessions highlighted Martinez's case when he visited Oregon in September and urged local jurisdictions that don't cooperate with federal immigration agents to reconsider those policies.\
SOURCE>http://www.dailymail.co.uk/news/article-5138223/Repeat-Mexican-deportee-sentenced-assault-US.html
Posted by theodore miraldi at 9:48 AM