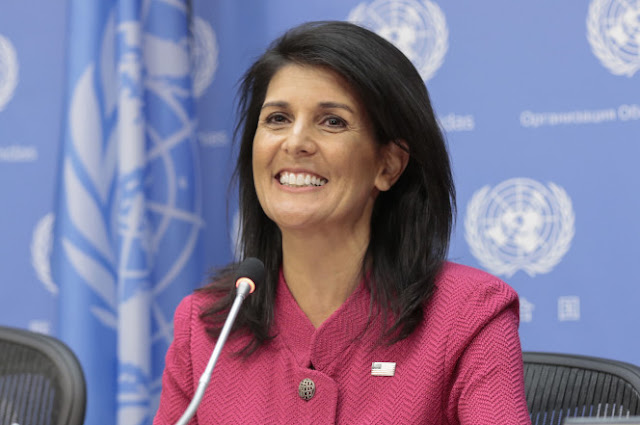 
UN Ambassador Nikki Haley announced Sunday that the United States negotiated a $285 million cut in the United Nations’ “bloated” budget for next year.
“The inefficiency and overspending of the United Nations are well known,” Haley said in a statement from the US Mission. “We will no longer let the generosity of the American people be taken advantage of or remain unchecked.”
Haley added that the “historic reduction” in spending is a step in the right direction and that the US would make many other moves toward a more efficient and accountable UN.
“In addition to these significant cost savings, we reduced the UN’s bloated management and support functions, bolstered support for key US priorities throughout the world and instilled more discipline and accountability throughout the UN system,” the statement said.
The new deal for the 2018-2019 fiscal year is $285 million less than the world body’s staggering $5.4 billion budget for fiscal year 2016-2017.
The ambassador went on to say that she hopes to help make even more reductions in the UN’s budget in the years to come.
Haley’s announcement came just days after she slammed the UN for “singling out” the United States and voting on a resolution to oppose President Trump’s decision to recognize Jerusalem as the capital of Israel.
The former South Carolina governor went on the warpath last week over the UN’s resolution — and said the US would be “taking names,” as a result.
“The United States will remember this day in which it was singled out in this assembly for the very act of exercising our right as a sovereign nation,” Haley told member nations ahead of their vote.
“We will remember it when, once again, we are called up to make the world’s largest contribution to the UN, and we will remember it when many countries come calling on us to pay even more and to use our influence for their benefit.”
Out of the 193-member General Assembly, 128 countries voted in favor of declaring Trump’s recognition of the city as the Jewish state’s capital “null and void.”
Guatemala, meanwhile, became the first nation to follow Trump’s lead when it announced Sunday that it would be moving its embassy in Israel from Tel Aviv to Jerusalem.
President Jimmy Morales said he made the decision after discussions with Israeli Prime Minister Benjamin Netanyahu.
Guatemala was one of the nine nations that voted against the UN’s resolution on Jerusalem.
The country has long had ties with Israel, especially in security matters.
No other country has chosen to move its embassy to Jerusalem since Trump’s decision, although the Czech Republic has said it is considering it.
With Wires
Source>https://nypost.com/2017/12/25/nikki-haley-negotiates-285m-cut-in-bloated-un-budget/
Posted by theodore miraldi at 9:33 AM