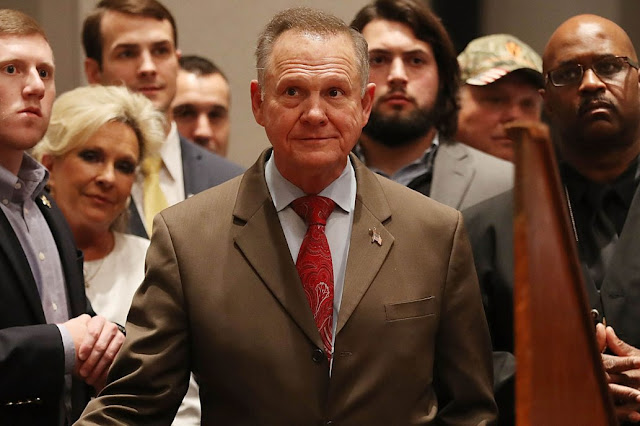 
America dodged a bullet in Alabama last night.
A man who was twice removed from his state’s Supreme Court for defying judicial orders, who said Muslims should not be allowed to serve in elective office, who suggested the black family was better off under slavery, and who declared that homosexuality should be illegal — this man will not be in the United States Senate. Thank God.
Note that I didn’t bring up the teenagers. Roy Moore was horribly unfit for high office — for any office — even if you put to one side the credible allegations against him for chasing girls as young as 14.
Democrats had no business winning. The special election for the Alabama Senate seat vacated by Attorney General Jeff Sessions is one pretty much any Republican in the state could have won — except for Roy Moore. No Democrat has won a Senate seat there in a quarter century. Alabama went 62 percent for Donald Trump in 2016.
Truth to tell, Doug Jones didn’t really win it. Roy Moore lost it. The possibility of this despicable goon serving Alabama in Washington was so horrifying to so many Alabamians that Republicans stayed home in droves and Democrats who probably couldn’t have picked Jones out of a lineup on Election Day stampeded to the polls.
Yes, these were special circumstances indeed. But what happened in Alabama last night is a dark portent indeed for Republicans in 2018.
Though they went down to defeat, Democrats in 2017 have been outperforming in special House elections from Georgia to South Carolina to Montana. Then, in November, a statewide election in Virginia that looked close turned into a historic once-in-a-century sweep for Democrats from the governorship to the statehouse.
There is a fired-up Democratic and independent electorate out there wildly unhappy with single-party GOP rule in Washington under Donald Trump — and at the local level as well. All of this follows not only Trump’s surprise victory in 2016 but astounding Republican gains in both national and state legislatures during the Obama years.
The losers in this pre-wave have ranged from a conventional conservative like Republican gubernatorial candidate Ed Gillespie in Virginia to the mouth-breathing, knuckle-dragging Moore.
What might this tell us about what Republicans will face in 2018, when all 435 House seats and 34 of 100 Senate seats will be decided on Election Day?
As Clubber Lang says in “Rocky 3,” I predict pain. If a Democrat can win in Alabama and Democrats can win 14 House of Delegates seats in Virginia, few Republicans can be absolutely sure they are safe going into 2018.
The latest Marist poll gives Democrats a 13-point margin when voters are asked whether they would prefer to vote for a Democrat or a Republican next year.
At this stage in 2009, with the 2010 elections coming up in 11 months, Democrats and Republicans were effectively tied. It took Republicans until the end of August in 2010 to get anywhere near the 13-point generic margin. Democrats are there now.
More important, perhaps, they’re setting themselves up for victory by recruiting candidates to run in races against Republicans in so-called safe seats — 209 of them, according to 538.com. This is important because if a nationwide wave breaks for Democrats they will have bodies everywhere that can ride the wave.
Most telling, perhaps, of all the exit-poll data from Alabama was that President Trump’s approval rating among those who turned out to vote was 48 percent, a full 14 points below his vote tally in 2016. So either many people who like him just didn’t turn out for Moore, or Trump is significantly less popular even among Republicans than we have been led to believe.
If Trump can’t break 50 percent approval among voters in Alabama, he’s going to have to do something to get people beyond his solid one-third of the nation to think well of him and his party. Otherwise, as the Alabama results suggest, the GOP is going to be smashed into a million pieces next November.
SOURCE>https://nypost.com/2017/12/13/roy-moore-needed-to-lose-but-what-does-it-mean-for-2018/
Posted by theodore miraldi at 11:34 AM