Sessions Needs to STOP the MISUSE of Intelligence for Politics 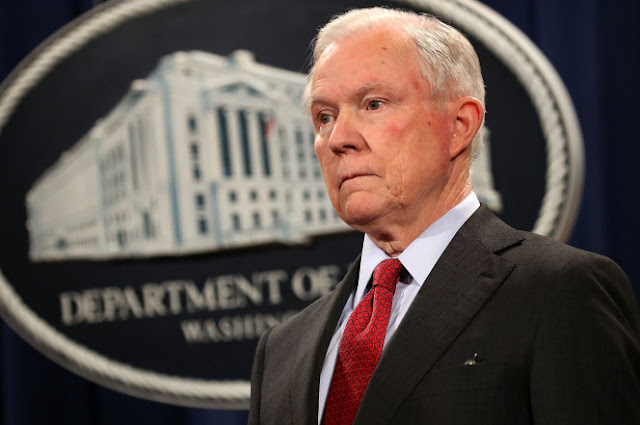 
In hindsight, the most important thing said this year came on Jan. 3. Chuck Schumer, leader of Senate Democrats, warned President-elect Trump he would pay a price for disputing intelligence officials’ findings of Russian meddling.
“Let me tell you: You take on the intelligence community — they have six ways from Sunday at getting back at you,” Schumer ­declared.
Schumer was right about a vendetta, but wrong about timing. It’s now clear that intelligence officials already had started “getting back” at the next commander in chief.
They started in the summer of 2016.
In early August, Mike Morell, who was acting head of the CIA ­under Barack Obama, broke with agency tradition by entering the ­political fray to endorse Hillary Clinton.
He praised her as “highly qualified” and said Trump was “not only unqualified for the job, but he may well pose a threat to our national security.”
That same month, the FBI was also busy with its pro-Clinton, anti-Trump playbook. Peter Strzok, a top counterintelligence agent, was scathingly dismissive of Trump in text messages, but one is getting ­extra attention.
Writing to Lisa Page, an FBI lawyer with whom he was having an affair, and referring to a conversation that likely included Andrew ­McCabe, James Comey’s top deputy, Strzok said:
“I want to believe the path you threw out for consideration in Andy’s office — that there’s no way he [Trump] gets elected — but I’m afraid we can’t take that risk. It’s like an insurance policy in the ­unlikely event you die before you’re 40 . . .”
Here’s the obvious question: What was “it” that’s “like an insurance policy”?
Was it the Russian dossier and its salacious, unverified accusations against Trump then being shopped around Washington?
Or was the insurance policy the FBI investigation into the Trump campaign, which was only weeks old — and which Strzok was leading?
Strzok was a busy man, working both sides of the presidential fix. Fox News reports he also was a major player in the Clinton e-mail probe and helped to soften the language so Comey could legally exonerate her.
If that were all, it would be enough. But there’s more, much more.
A ranking Justice Department official, Bruce Ohr, was secretly meeting with Fusion GPS, the firm that was paid by the Clinton campaign and the DNC to produce the dossier. He also met with Christopher Steele, the former British spy who compiled the dossier, in part by paying Russian government sources for dirt on Trump.
And get this: Fusion GPS has confirmed that Ohr’s wife was working for the company on the anti-Trump contract.
Just before Fox News revealed those cozy arrangements, Ohr was demoted.
Similarly, special counsel Robert Mueller, whose team of prosecutors is dominated by Clinton donors, dismissed Strzok when the department’s inspector general alerted him to the damning texts, but Strzok is still working for the FBI.
Those actions are baby steps next to the monstrous facts: Leading members of the intelligence community tried to tilt the election to Clinton and, having failed, tried to undermine the Trump presidency.
How vast was this conspiracy and who else was involved? Most ­important, how high did it go?
Hopefully, some answers are coming as it becomes impossible to deny the stench of wrongdoing in high places. Congress is picking up the fight for facts and even Morell now confesses misgivings about the political turn he and others in the intelligence agencies took.
In a recent Politico interview, he cites his endorsement of Clinton, criticisms of Trump from John Brennan, who also headed the CIA under Obama, and Michael Hayden, former head of the NSA, and the torrent of classified leaks as reasons why Trump would be suspicious.
Morell added: “So, he must have thought, ‘Who are these guys? Are these guys out to get me? Is this a political organization? Can I think about them as a political organization when I become president?’ ”
Morell admitted that such implications were “something I didn’t think about.”
That is an astonishing admission. And one that should finally stir the somnolent Jeff Sessions.
The attorney general has gone missing when he is needed most. The emerging evidence follows earlier warning signs that include Comey’s suspicious actions, Loretta Lynch’s tarmac meeting with Bill Clinton during the e-mail case and the unmasking of Trump associates from intercepted phone calls.
They all fit a consistent pattern of weaponizing intelligence and law enforcement for political purposes.
In stark terms, Hillary Clinton got a free pass and Trump got sabotaged — by the same people.
Sessions — I repeat myself — is the worst hire Trump made. His decision to recuse himself from anything involving Trump’s campaign because he was a surrogate led ­directly to Mueller’s appointment.
But along the way, Sessions’ limited recusal mushroomed into a vow of inaction. Recalling Herman Melville’s “Bartleby, the Scrivener,” Sessions “would prefer not to” do his job.
Meanwhile, his deputy, Rod Rosenstein, who appointed Mueller, looked like a deer caught in the headlights last week when House GOP members demanded to know whether the FBI paid Steele and whether the Trump dossier was used to get a surveillance warrant against Trump associates.
Rosenstein said he knew the answers, but couldn’t give them. I take that to mean the answer is yes, which would amount to compelling evidence that the Justice Department, FBI and CIA under Obama worked with the Clinton campaign to stop Trump.
Paging Jeff Sessions: History is calling. Answer the damn questions!
Yet even with Trump in the White House, the FBI and Justice Department are still stiff-arming Congress, with both agencies resisting in ways that suggest they are protecting dirty secrets.
Judicial Watch, which is doing heroic work in using the courts to pry loose critical info, is meeting the same resistance.
Americans are steadily losing faith in their government, and the CIA and FBI are not exempt. Sessions should either get to work or hit the road.
Source>https://nypost.com/2017/12/17/sessions-needs-to-stop-the-misuse-of-intelligence-for-politics/
Posted by theodore miraldi at 10:59 AM