The Movement to IMPEACH Trump is Just Beginning 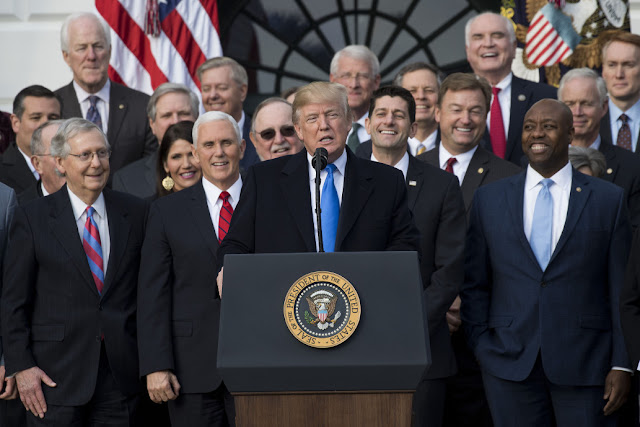 
Before you settle down for a long winter’s nap with adult visions of sugar plums, consider a key fact about the 2018 midterm elections: We already know what they’re going to be about.
Republicans, thanks to their last-minute tax triumph, will run on a pro-growth agenda. If the middle-class tax cuts work as promised, if the economy cooperates by continuing to expand by 3 percent or more and produces jobs, jobs, jobs, the GOP will have a strong message to sell.
It will need one to protect its narrow margins in Congress, especially because the majority party usually loses seats in the first midterms.
Democrats, on the other hand, have no message, no leader and nothing to brag about. That leaves a vacuum, which is being filled with one idea: impeaching President Trump.
Now if an election that pits tax cuts and job growth vs. impeachment strikes you as crazy, don’t blame me. And, truth be told, you can’t really blame Democratic Party leaders either. They aren’t so much leading their base as following it.
The “resistance” wing is taking over the party and congressional bosses Sen. Chuck Schumer and Rep. Nancy Pelosi can either jump on the “Impeach” bandwagon — or get run over by it.
They’re capitulating already, as proven by the way Schumer and others reacted to a rumor last week that the president was going to fire special counsel Robert Mueller.
Never mind that Trump denied it, and there wasn’t even an anonymous source. It was just a rumor started by one House Democrat who said somebody she knew said something about Trump, so she repeated it to the media.
On cue, the Dem lemmings rushed to the microphones and cameras to warn that Trump would face impeachment if he fired Mueller. It was a sneaky way of sounding a dog whistle without a fact to justify it.
In fact, Schumer et al. would be head over heels with joy if Trump did fire Mueller. That would give their impeachment effort gravitas and make it more appealing to independent voters and even some Republicans.
So while they were warning Trump not to fire Mueller, their hope is that he does.
Politically, all this is catnip to the party’s media handmaidens and gives them something to write about instead of the GOP success at passing tax cuts.
Their nonstop chatter, including on the late-night comedy shows, is helping the impeachment madness break the bounds of the loony left and go mainstream.
In line with other recent polls, Quinnipiac’s latest survey reports that Trump’s national approval is just 37 percent, while 50 percent of voters, including 59 percent of women, believe he should resign — and that’s just over the sexual allegations against him.
Among Democrats, Trump’s resignation was favored by a whopping 85–12 percent, while independents favored it by 52–44 percent.
These numbers are off the charts, and they explain the bosses’ emerging strategy. While they’ll decorate the campaign tree with a few other items, like raising taxes on the wealthy and climate-change scares, removing the president will be their main argument for electing a Democratic Congress.
Not incidentally, notice that the sexual allegations against Trump, although they were made before he defeated Hillary Clinton, have replaced Russia, Russia, Russia as the main justification for impeachment. While the Harvey Weinstein-Charlie Rose tsunami is part of the explanation, the other part is that Dems are giving up on Mueller finding anything significant.
Cynic though I am, I never thought the Dems would go down such a low road.
A year ago, when Trump Derangement Syndrome picked up steam after his victory, I assumed it would last six months at most, and there were times when it seemed to be petering out. The “need to impeach” ads by hedge-funder Tom Steyer struck me as a billionaire’s folly.
But I was making the same mistake about the resistance that others had made about Trump’s electability. I assumed it wouldn’t last because nothing like it ever had.
But it’s clear now that the mob-like motivation isn’t going to disappear. It’s become a steamroller force on the left.
No other idea, whether it’s Bernie Sanders’ Free Stuff agenda, or the racial-ethnic-gender quota-spoils dreams of DNC boss Tom Perez, can match the fervor of the hate-Trump movement. It’s the straw stirring the drink.
Which is what makes it so dangerous. Never in modern times has a major party used impeachment as a pure political weapon.
Yet, assuming Mueller comes up with nothing significant, that’s exactly what Democrats are planning. They will try to win with impeachment what they lost at the ballot box, effectively nullifying the 2016 election.
Which brings me to my final prediction: If you think our politics are nasty now, just wait a few months. The midterm campaign is going to be vicious and dirty beyond belief.
Source>https://nypost.com/2017/12/24/the-movement-to-impeach-trump-is-just-beginning/
Posted by theodore miraldi at 8:36 AM