The SANE Way to View the Mueller Probe — and Politics 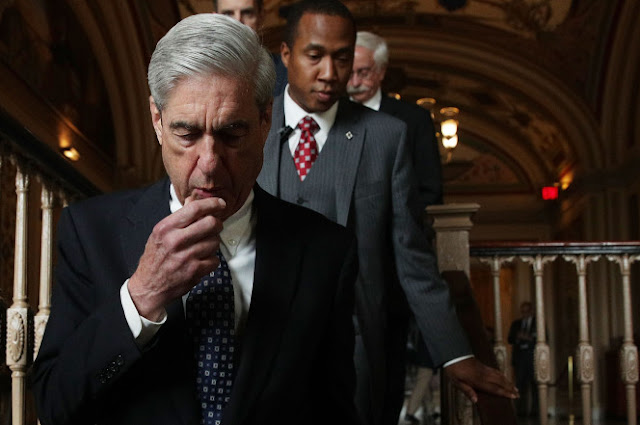 
We’re winding up the craziest year in US politics since Nixon gave Elvis a narc badge. Wherever you turn, people assume the folks on the other side are criminally insane miscreants. I, however, begin by assuming everyone’s good faith.
It’s the most boring choice. And the most plausible.
That goes for President Trump. Firmness and prudence, energy and tact, weren’t given to him in equal measure, and every time things have turned his way he’s made an equal and opposite gaffe.
But he’s not the villain he’s made out to be by the media. Unlike Barack Obama, he’s played by the Constitution’s rules, and is nothing like the dictator he’s said to be. As for evidence of collusion with Russia, from what we’ve seen it’s just not there.
I’m also happy to assume Special Counsel Robert Mueller’s good faith. A Bronze Star in Vietnam, registered Republican, I’m supposed to believe he’s on a crusade to bring down the president? It doesn’t add up.
His probe grinds on, like the mills of the gods, as you’d expect from a conscientious lawyer charged with sifting through a mountain of evidence. I don’t even get worked up about the lawyers he’s hired. Yeah, they have political views, they’ve donated to Democrats. But what do you expect when you want to hire top legal talent in DC? Everyone’s a Democrat here.
Except things have gotten more complicated. Mueller doesn’t seem to have come up with evidence Trump colluded with the Russians during the campaign. All he’s produced thus far are pleas to technical offenses from underlings, people like Michael Flynn, who committed the Martha Stewart offence of lying to the FBI about something that wouldn’t have been a crime had he told the truth.
Not very exciting. What’s become interesting is the rest of the story, what looks like contacts between the Democrats and the Russians. After Trump won the nomination and conservatives dropped the oppo-research firm Fusion GPS — which gave them only publicly available information — Democrats contracted with Fusion, which gave them something more than public info: a dossier written by Christopher Steele, a British MI6 spook who had contacts in Russia, and that’s where the stories about prostitutes and urine-soaked beds came from.
What a gold mine for Hillary Clinton’s campaign! But what if, just suppose, the incredible stories were not very . . . credible? What if, instead, they were simply a useful hook on which to hang a full-scale investigation of the Trump campaign?
Somehow — we can only speculate — the dossier was transferred from the Democratic Party to the FBI, where the agency’s anti-Trump partisans pounced on it, like a vulture on its prey. They used it to obtain a court order to wiretap Republican campaign workers, whose identities were then unmasked and whose campaign strategies were revealed to Obama officials.
The same FBI agents had also watered down key findings in the Clinton e-mail probe to ensure she wouldn’t be charged with a criminal offense.
All of this is under investigation by Congress and the Justice Department’s inspector general, and a year later we seem to be left with two possibilities: Either the Trump campaign colluded with the Russians, or the Democrats had connived (and perhaps colluded) with the Russians and used all the tools at the Obama administration’s command to spy on a Republican challenger in the midst of a presidential campaign — and thus far we’ve seen no evidence of Republican collusion.
Mueller now starts to look less like a flint-eyed Inspector Javert and more like a bumbling Inspector Clouseau, shining his flashlight into empty caverns when the real skullduggery lies in the sunlight behind him.
He’s no fool, however. He has to know this. And he’ll also know that the 2018 midterms look like a match-up between jobs and 3 percent GDP growth for the Republicans versus impeachment for the Democrats. And what’s the evidence to justify an impeachment? Just the ongoing Mueller investigation.
The special prosecutor is supposed to keep politics out of his mission, but it’s too late to do so when the investigation will be the chief campaign issue for one of the parties.
Were Mueller a liberal partisan, that’s just what he’d want. Except I don’t think he’s a partisan. I think he’s honorable. That’s why the White House is confident that he’ll wrap up the investigation shortly, well before next November.
F.H. Buckley teaches at Scalia Law School and is the author of “The Republic of Virtue: How We Tried to Ban Corruption, Failed, and What We Can Do About It.”
Source>https://nypost.com/2017/12/28/the-sane-way-to-view-the-mueller-probe-and-politics/
Posted by theodore miraldi at 9:14 AM