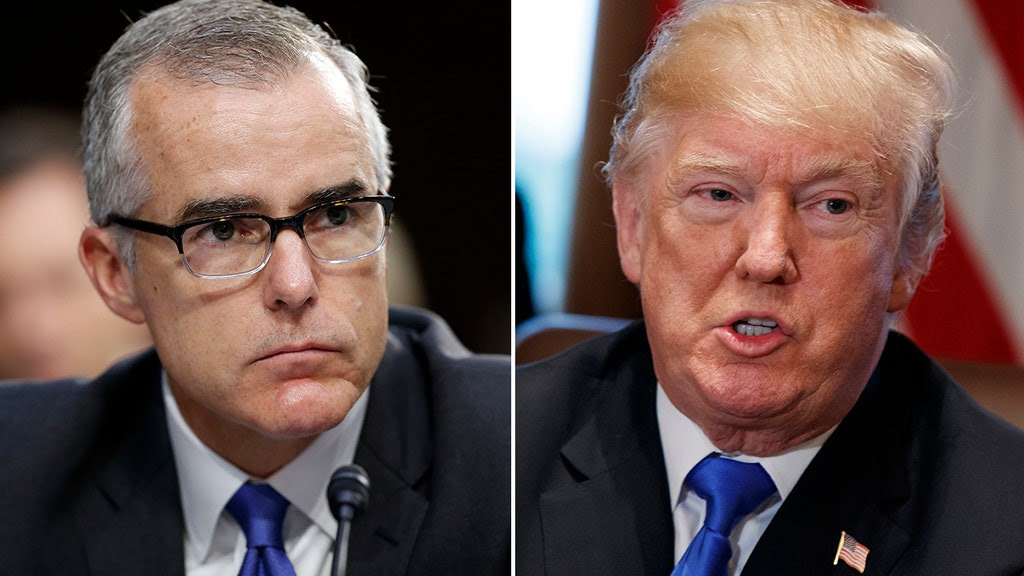 
President Trump on Saturday took aim at two top FBI officials who have recently been the target of Republican critics.
In several afternoon tweets, Trump drew attention to recent news stories about FBI Deputy Director Andrew McCabe and FBI General Counsel James Baker.
“FBI Deputy Director Andrew McCabe is racing the clock to retire with full benefits,” Trump tweeted. “90 days to go?!!!”
His tweet appeared to be in reference to a Saturday story published by The Washington Post saying McCabe plans to retire in several months after becoming eligible for benefits.
Republicans have long questioned McCabe’s ties to the Democratic Party, considering his wife ran as a Democrat for a Virginia Senate seat in 2015.
“How can FBI Deputy Director Andrew McCabe, the man in charge, along with leakin’ James Comey, of the Phony Hillary Clinton investigation (including her 33,000 illegally deleted emails) be given $700,000 for wife’s campaign by Clinton Puppets during investigation?” Trump asked.
Trump also commented on the news that Baker, the bureau’s top lawyer, is being reassigned to another role at the FBI.
“Wow, “FBI lawyer James Baker reassigned,” according to @FoxNews,” Trump tweeted.
The Washington Post reported this week that Baker, who has served as the FBI’s general counsel, was leaving his role and had being reassigned at the bureau.
The newspaper reported that Baker “had been caught up in a strange interagency dispute that led to a leak probe and attracted the attention of senior lawmakers,” but that the issue “had not played a part in Baker’s reassignment.”
COMEY DEFENDS REASSIGNED FBI LAWYER
On Friday evening, the website Politico published a story saying House Republicans were interested in Baker’s contacts with a liberal reporter from Mother Jones in the weeks ahead of the 2016 election.
Former FBI Director James Comey defended the bureau’s recently reassigned top lawyer and suggested the move was political.
“Sadly, we are now at a point in our political life when anyone can be attacked for partisan gain,” Comey tweeted Friday night.
Comey, who was fired by Trump earlier this year, tweeted: “James Baker, who is stepping down as FBI General Counsel, served our country incredibly well for 25 years & deserves better. He is what we should all want our public servants to be.”
Source>http://www.foxnews.com/politics/2017/12/23/trumps-tweets-take-aim-at-top-fbi-officials.html
Posted by theodore miraldi at 5:17 PM