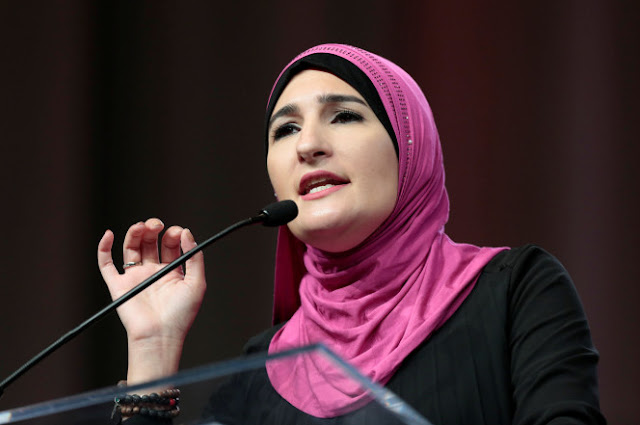 
Controversial Muslim activist and Women’s March organizer Linda Sarsour bullied an underling to cover up sex-abuse allegations in her Brooklyn office, a report said.
Asmi Fathelbab told blog The Daily Caller that a man repeatedly rubbed his crotch on her while she worked for the association under Sarsour in 2009.
But when Fathelbab reported the abuse, Sarsour — a self-proclaimed feminist and co-founder of the Women’s March organization — fat-shamed the woman and threatened to blacklist her from political jobs, the woman told the website.
“She oversaw an environment unsafe and abusive to women,” said Fathelbab. “Women who put [Sarsour] on a pedestal for women’s rights and empowerment deserve to know how she really treats us.”
The Daily Caller reportedly spoke on condition of anonymity with another association employee and a political operative that worked alongside the organization, and both corroborated Fathelbab’s account of the abuse and Sarsour’s intimidation.
Fathelbab took a contract gig with the association in 2009 and claims she was repeatedly accosted by a man who lived in the same Bay Ridge building as the group’s office.
“He would pin me against the wall and rub his crotch on me,” she told the Caller.
“It was disgusting… You have no idea what it was like to stand up and feel that behind you.”
But Sarsour called her a “liar” when Fathelbab reported it and told her “something like this didn’t happen to women who looked like me,” Fathelbab charged, clarifying on Twitter that the the rebuff was a dig at her weight.
Fathelbab went to the president of the Arab American Association’s board of directors, Ahmad Jaber, but says he told her the accused man, Majed Seif, was incapable of the allegations because he is a “God-fearing man” who was “always at the Mosque.”
Furious that Fathelbab went over her head, Sarsour threatened to have her blacklisted from New York political and activist circles — and that’s what Fathelbab says happened.
“She told me I’d never work in NYC ever again for as long as she lived,” the 37-year-old New York native Fathelbab said. “She’s kept her word. She had me fired from other jobs when she found out where I worked. She has kept me from obtaining any sort of steady employment for almost a decade.”
Sarsour did not immediately respond to a request for comment.
Source>https://nypost.com/2017/12/18/womens-march-organizer-accused-of-covering-up-sex-abuse/
Posted by theodore miraldi at 2:54 PM