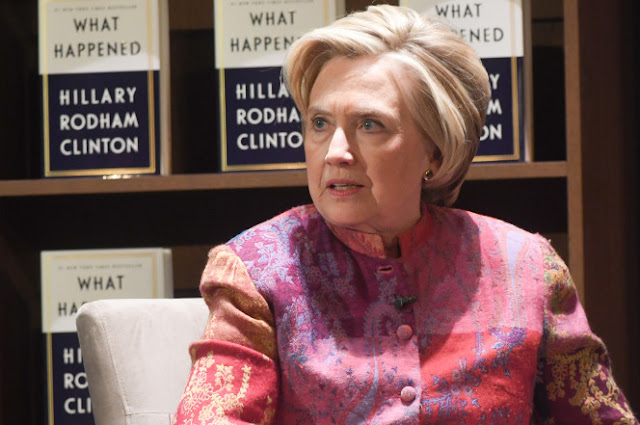 
The Trump administration is launching another probe into Hillary Clinton’s use of a private email server when she was secretary of state, a new report said Thursday.
Attorney General Jeff Sessions hopes to uncover new details on how Clinton and her aides handled classified material, The Daily Beast reported, citing a source close to the former Alabama senator.
The new probe was prompted by President Trump’s repeated calls on Twitter and elsewhere for another FBI investigation into “Crooked Hillary,” the source said.
“Many people in our Country are asking what the ‘Justice’ Department is going to do about the fact that totally Crooked Hillary, AFTER receiving a subpoena from the United States Congress, deleted and ‘acid washed’ 33,000 Emails? No justice!” Trump tweeted early last month in a typical barb aimed at his former opponent.
The source said it was unclear whether the Justice Department would still be interested in Clinton’s emails without Trump’s pressure.
The revelation of the new probe came after the conservative watchdog group Judicial Watch released emails it obtained from Justice that show that top Clinton aide Huma Abedin had sent classified emails to a personal laptop she shared with her husband, convicted pervert Anthony Weiner.
Brian Fallon, a former spokesman for the Justice Department and Clinton’s presidential campaign, told the website he suspects that Justice officials are reopening the probe “to give Trump and his allies something to talk about and point to, and something to give Fox News to devote segments to.”
“I think that even that is extremely dangerous, and that the Justice Department should not be opening itself up to the perception that it is bending to political pressures from the White House,” Fallon continued. “The Justice Department is supposed to operate independently of the White House, and even if this is just a perfunctory step that they’re taking to try to appease the president, that in and of itself is an abuse of the DOJ authority.”
Nick Merrill, Clinton’s spokesman, said Trump was just manufacturing a distraction from bad news engulfing his administration — including the bombshell new book by Michael Wolff, “Fire and Fury,” which paints a dismal picture of the president’s White House.
“As Trump begins the new year with Steve Bannon calling his campaign treasonous and indictments and guilty pleas piling up, he resorts to diversion and distraction like clockwork, with the help of his Attorney General. Few matters have been more scrutinized than emails, and it was determined that there was no wrongdoing,” Merrill told the website.
“Trump’s behavior shows a profound disrespect for the rule of law and an unprecedented abuse of power—with his Attorney General following suit at every turn. It tarnishes our justice system, and should be deeply troubling to all Americans.”
The FBI under ex-director James Comey investigated the former first lady’s email and called her careless but declined to prosecute her.
Team Trump charges that Comey was in cahoots with Clinton, even though the FBI’s probe dogged her throughout most of her failed campaign.
Source>https://nypost.com/2018/01/04/doj-prepares-new-probe-of-clintons-email-server/
Posted by theodore miraldi at 12:06 PM